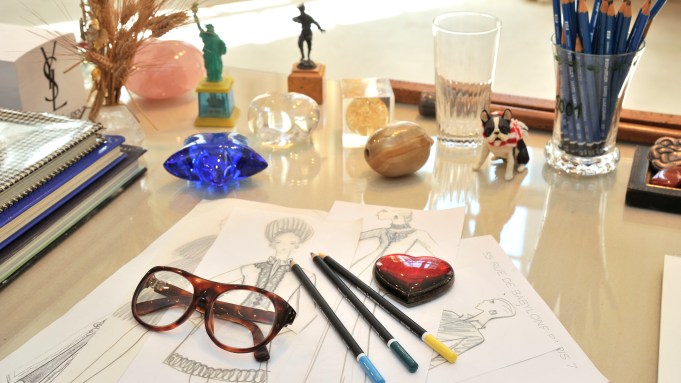 PARIS – When the Fondation Pierre Bergé-Yves Saint Laurent reopens in Paris next year as a permanent museum, people will be able to visit the designer’s studio and his former couture salons for the first time.

The museum will also feature a 70-piece display from the house’s archives, which includes 5,000 couture garments from Saint Laurent’s 40-year career and 15,000 accessories, as well as thousands of sketches, collection boards, photographs and objects. Garments will be shown in batches of 70 on a rotating basis to protect the textiles.

Ahead of the opening and the simultaneous inauguration of another Saint Laurent museum in Marrakech, Morocco, in fall 2017, the foundation has given several tours of the studio and archives to a handful of journalists.

“It’s about understanding the extraordinary importance of the collections,” Bergé told WWD over the phone from Morocco.

Located on the first floor of the building at 5 Avenue Marceau, the studio feels frozen in time. On the couturier’s desk are his signature eyeglasses, pencils and figurines, such as the one representing his dog Moujik. On the wall, there’s a framed 1980 W magazine cover.

Saint Laurent and Bergé had the preservation of the designer’s collections in mind from day one, when they set aside the prototype of a black dress, “griffe 00001,” in 1961.

Prototypes kept in the collection are the ones most faithful to what the designer sent down his runways. In addition, there’s a whole accounting component to the archives, which includes notebooks from saleswomen that detail each sale with the date, client name, product and price tag. Bergé calls them “his notebooks,” and it’s in them one stumbles across such names as Grace de Monaco, Catherine Deneuve and Claudia Cardinale. Plus, each fashion piece’s own “fiche d’atelier,” which is basically an I.D. and a “fiche de manutention” involving technical aspects, such as “720 hours of work at Maison Lesage,“ the embroidery atelier.

“This kind of conservation work, no other houses did it.…I did it since the very first day, because I believed that Yves Saint Laurent was to be the greatest couturier of the end of the 20th century. I was right, and therefore that he deserved this type of conservation,” said Bergé.

“I’ll meet with Anthony Vaccarello this week. I’ll tell him what I told Tom Ford, Stefano Pilati and Hedi Slimane – that the archives are open to him,” he added of the fashion house’s new creative director. (Of the three, only Slimane took up the offer and went on a regular basis.)

Precautions to maintain the clothes are widespread: Visitors are equipped with blouses and covers for their shoes. Only employees sporting gloves can touch the pieces, and garments are shielded from light in hermetically sealed compacts that are kept in a room with a steady temperature of between 64 and 68 degrees Fahrenheit and a 50 percent humidity level.

Lying flat in one drawer to protect the embroidery is the Iris jacket worn by Naomi Campbell in 2002 from the Vincent van Gogh collection from the summer of 1988. Hanging nearby is the dress in silk crepe and bayadère stripes that Deneuve wore at a Cannes Film Festival and the Piet Mondrian-inspired dress from winter 1965. There is also an array of Bougainvilliers capes from summer 1989 and the Seventies wedding dress festooned with “Love me forever” on the front “or never” on the back.

Transparent covers were conceived specially for the archives, as were rolls for padding the garments. Each time a pieces is taken out for an exhibit, or whenever an acquisition is made (the foundation makes about 20 of them each year, excluding donations), it is treated with an anoxia process to prevent moths.

“There are things even we cannot prevent,” deplored Sandrine Tinturier, head of conservation at the Fondation Pierre Bergé-Yves Saint Laurent, citing examples such as white tulle turning gray or varnish getting cracked. (Anything else can be thwarted by the team of four restorers specifically on hand for that.)

French architecture firm Studio KO is heading the Morocco project, on Rue Yves Saint Laurent near Jardin Majorelle, the garden the designer and Bergé turned into a cultural site with a museum focused on Berber culture. Spanning more than 43,000 square feet, the building will display 50 pieces by Saint Laurent (out of the total of 150 pieces sent to Morocco, which will be shown on a rotating basis), and have space for temporary exhibitions, an auditorium, a research library, a café and a restaurant. The first temporary exhibition will be dedicated to the painter Jacques Majorelle.

Meanwhile, the exhibition space in Paris will be doubled in size to 4,300 square feet and refurbished in the style of Saint Laurent’s original couture house. The renovation is headed by stage designer Nathalie Crinière and curation is to be spearheaded by Bergé.

Some 70 pieces will be displayed there. Although the selection has yet to be made, it’s understood that the Paris museum will feature such key pieces as a Smoking, a Piet Mondrian-inspired dress and a dress from the Pop collection. The museum is also to give a play to the work Saint Laurent and Bergé did together.

“Yves is the genius. But it’s true that this couture house, we created it together,” Bergé noted.

In the meantime, around 100 fashion pieces will travel abroad for “Yves Saint Laurent: The Perfection of Style,” an exhibit opening at the Seattle Art Museum in October.  And two pieces just went to the Salvatore Ferragamo Museum in Florence for the new show called “Across Art and Fashion.” There is also an exhibit set to open in 2017 on Yves Saint Laurent at the Virginia Museum of Fine Arts in Richmond.

-Do lay down flat embroidered and heavy garments to avoid tears.

-Don’t lay velvet down flat. It gives a faded aspect.

-Don’t lay down feather pieces. Always hang them to keep the feathers plump and fluffy.

-Do space out pieces in a wardrobe – 12 inches ideally between each.

-Use rolls for padding when you hang clothes in a wardrobe.

-Before incorporating new pieces, give them an anoxia treatment for three weeks.

-When shipping clothes, use airmail instead of boat and do ship in several batches in case of accident.