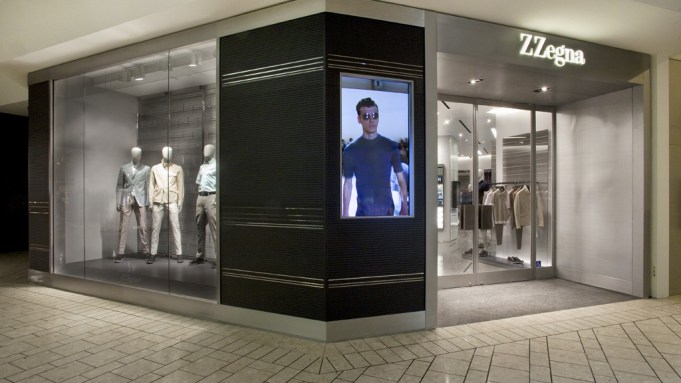 NEW YORK — Z Zegna is stepping out on its own.

The Ermenegildo Zegna Group has opened its first stand-alone store in the U.S. for the younger, more contemporary collection — a 1,600-square-foot boutique in the Beverly Center in Los Angeles. If successful, the concept could be rolled out to additional cities in the near future, according to Gildo Zegna, chief executive officer of the Italian luxury brand.

“The Z Zegna man is a distinctly different customer within the Ermenegildo Zegna Group who seeks quality craftsmanship combined with youthful, modern design and technology,” Zegna said. “Z Zegna was launched in 2004 with the specific intention of speaking to this younger, more fashion-forward customer. Until now, we have enjoyed a successful business presenting the collection within key Ermenegildo Zegna retail boutiques in the U.S. and with department stores such as Nordstrom, Saks and Barneys. It’s now time to bring Z Zegna out to stand on its own to give the brand the best opportunity for future growth.”

The California store, which joins such high-end brands as Hugo Boss, J. Lindeberg, Louis Vuitton, Michael Kors and Prada in the center, provides an opportunity for the company to showcase the collection independently. “For the first time in the U.S., customers will be able to see Z Zegna in its ideal environment with a 360-degree view of the collection,” Zegna said. “I am sure we will introduce the brand to new customers but we also expect to surprise customers who know the brand but have not seen the collection before in such a fully realized way.”

About 19 months ago, Zegna brought in Paul Surridge, whose résumé includes stints at Jil Sander, Burberry and Calvin Klein, to serve as creative director of the Z Zegna brand. The U.K.-born designer, who has spent the majority of his career in Italy, introduced his first collection in fall 2012.

He said that upon joining Zegna, he quickly realized that he had joined a well-oiled “institution” and quickly decided to “embrace what was there” instead of making an “arrogant statement about a new creative director arriving.”

He studied the company’s tailored clothing expertise and endeavored to “bring a more spirited, fashion-forward” look to the collection. “I thought Z Zegna could be a total look and not just tailoring,” he said, noting that he has worked to increase its penetration of sportswear and has also worked on accessories. “And I’ve historically worked with color, so there’s more color in the line than before,” which provides more of “a fashion edge,” he said.

Surridge is also cognizant that the products he designs must be saleable. “I’ve worked for some very high turnover brands,” he said, pointing to the Burberry London collection in particular, which he said is “the engine” of the label. “So I’m not just bringing a formula to the table.”

He said the best-selling Z Zegna items during his tenure have included suits and knitwear. “We’ve noticed globally that suits are doing really well in a moment when suits are slowing down. But Z Zegna is accessible luxury,” he said. He singled out a slim textured silhouette in a ripstop fabric as among the most popular items, along with a nylon mackintosh raincoat with “an urban parka feel.”

He said men today are seeking versatility in their wardrobes and are looking for something they can wear at work as well as on the weekend. “The modern man’s life is not so defined.” And this is especially true in a market such as Los Angeles.

Zegna said, “Being the home of the entertainment industry, there is a high interest in fashion and design in L.A. Z Zegna provides innovative suiting options, strong sportswear and leather accessories to complement the different lifestyles of the L.A. consumer.”

Surridge said the Z Zegna customer is “interested in fashion but is not a fashionista. They’re attracted to the brand but they’re not really ready for Ermenegildo Zegna.”

Surridge said he strives to offer a “contemporary” point of view with his designs and takes into account the performance, cut and total look of the garments. “It has to feel right for the moment, have a visual impact and tell a story,” he said. And it also has to speak to the “quality and excellence in manufacturing” that Zegna has built its reputation upon. “It always has to connect to Zegna.”

Zegna said there are plans to roll out the freestanding retail concept but no other locations have been determined at this point.

“We plan to open more Z Zegna stores in the U.S. in the coming years, and this rollout will be a strategic and gradual process,” he said. “We certainly see great opportunity for the brand in this market.” Surridge revealed the company is looking for a space in New York City.

There are six other directly operated freestanding Z Zegna stores worldwide: five in Greater China and one in Venice. In addition, there are 10 Z Zegna stores in Asia that have their own entrance but are connected to an Ermenegildo Zegna store. There are also 20 Z Zegna shops-in-shop globally, including the newest one, at its New York City flagship, which opened Monday.