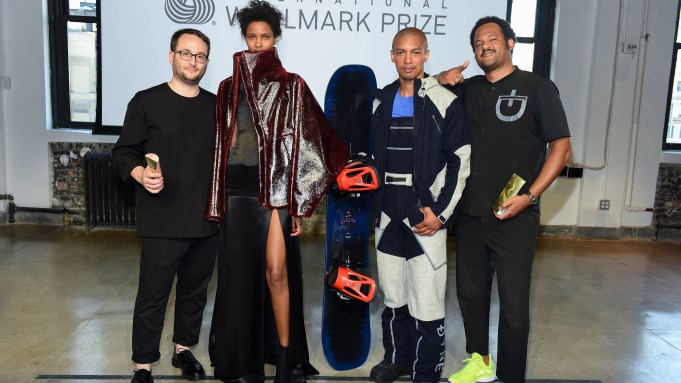 Zaid Affas, who is based in Los Angeles, and Chris Bevans of DYNE, which is based in Portland, Ore., scored the top prizes for women’s wear and men’s wear, respectively, at the U.S. regional finals. Both will compete in the international finals in January.

“It was a tight race. It always results in a conversation,” said Steven Kolb, president and chief executive officer of the Council of Fashion Designers of America, discussing the judging process that took place Tuesday at NeueHouse Madison Sq.  “Men’s was unanimous and women’s was a close race,” said Kolb.

Michelle A. Lee, head of Americas, The Woolmark Co., said, “The designers are getting stronger and stronger each year. There’s a pool of incredibly talented and creative designers. It helps us discover new talent whether or not they win.”

“He’s a designer of elegance, it’s another perspective, and it’s about innovation. Christopher has his thumb on the pulse of how sport and technology and luxury go hand-in-hand. It’s sport, it’s street, technology and a twist of luxury,” said Gilhart.

Born in Kuwait to Iraqi parents and raised in London, Affas is a graduate of London’s Central Saint Martins College of Art and Design. Following posts at Ports 1961, and Ralph Lauren, he set up his eponymous brand in Los Angeles in 2014.

Affas, clutching his trophy, said his winning design was about form, shape, structure and materials and designing fabrics that showed the Merino wool. He designed a purple laminated wool coat and a merino wool and viscose gown. In business with his brother, Affas described his own aesthetic as “timeless conceptual pieces.”

Having lived in cities around the globe, Affas’ work mixes natural, organic shapes and crisp, urban engineering. Among the stores that carry his collection are Linda Dresner and Yuta Powell. He also designs for private clients and trunk shows. Affas said he plans to use the prize money to expand into e-commerce, increase his distribution and build a full-time team. “I also want to focus on trunk shows. We do very well with them,”  he added.

In his own business a little over two years, Bevans said he’s been working toward this type of recognition for almost 20 years. Having worked at Nike as design director, as well as for Pharrell Williams, Kanye West, Sean John, and John Legend, among others, Bevans was practically born into the business. “My grandmother was a dressmaker in New York City, and I would play hide and go seek on her cutting table,” he said. Bevans went to the Fashion Institute of Technology and worked at Mood Fabrics, where he learned the business of textiles and “it helped me in my trajectory as a designer.”

“It’s rooted in fit, function and fabrics. We design clothes for the everyday person who lives an active lifestyle,” he said. His customer doesn’t necessarily have to play sports, but they’re active even if they simply step outside, go downtown or jump on a train. Dyne, which means “unit of force” in Greek, is sold to such retailers as Lane Crawford, Barneys Japan, Barneys New York (shipping for the first time), Juice in Hong Kong, and American Rag. The company has seven employees.

As for highlights of his career, Bevans said that after working for Sean John, Damon Dash caught wind of him and said he had just signed Kanye West. Bevans went on tour with West, when he played college venues and John Legend was opening up for him. Bevans would sketch out clothes and put them into production for West. “I left the tour to join Nike,” he said. Bevans described his time at Nike working as design director for Mindy Grossman, former global vice president of apparel. “She changed my directory and changed my life,” he said, because she empowered his design team. Bevans eventually got funding from the Lau family, denim manufacturers in Hong Kong, who helped him finance his own company.

Bevans’ winning design had a quarter-sized chip with Near Field Communication embedded in the pants, which can store data and can be shared with Android-based devices. It transmits information about the garment and explains what the brand is about. “It’s embedded into the garment, and is washable, durable and coded with a laminate which keeps it from being destroyed.” Bevans is also pursuing a fellowship at the MIT Media Lab.

Having been named a CFDA/Vogue Fashion Fund finalist on Monday, it’s been a busy week for Bevans, who was headed  to Premiere Vision and to spend four days in Boston at the MIT Media Lab. He said he planned to use the Woolmark prize money to work on his presentation for the next round. “Fall ’18 is on top of me, and I’m going to put it back into the business,” he said.