WWD caught up with the British designer at the Massachusetts College of Art and Design’s visiting artist series. 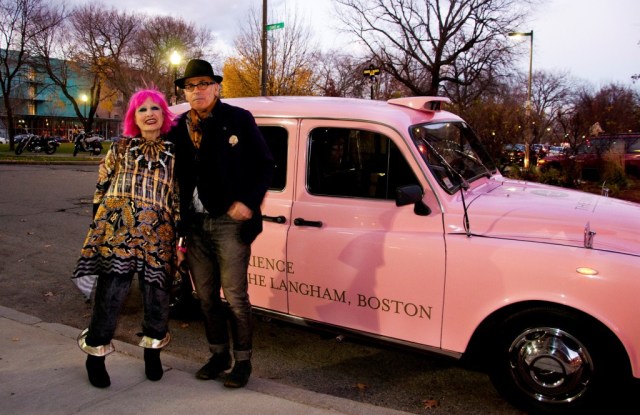 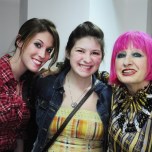 BOSTON — A DayGlo bob, a flamboyant arrival in a pink taxi and fashion students paying tribute in flamingo-hued outfits? Yes, legendary British designer Zandra Rhodes was on the scene in Boston.

Here for the Massachusetts College of Art and Design’s visiting artist series, Rhodes started her morning off at MassArt’s fashion studios critiquing student sketches. She instructed several to loosen up their wrists because she feels habitual tight work with a computer mouse cramps one’s style. (Instead of a computer, she tracks her life and inspirations in a thick diary with a hand-drawn calendar color-coded to represent nights spent in various cities — London is red, New York is highlighter pink.)

Midday, she ventured over to host a trunk show at Alan Bilzerian on Newbury Street. Bilzerian, owner of the namesake store, and his wife, Be, are longtime friends of Rhodes, who is godmother to their daughter. Rhodes sold about half of the 50 pieces she brought, some priced as high as $5,000.

Then it was back to MassArt for an evening lecture where she flipped through slides from Vogue and Interview, pointing out famous faces, occasionally sniping at styling jobs she didn’t like. Rhodes has kept meticulous archives of her work, which she has used to assemble the traveling exhibition “Zandra Rhodes: A Lifelong Love Affair With Textiles,” currently in San Diego. MassArt is hoping to bring it to Boston.

She talked at length about her design process, which starts with drawing or painting a motif and then piecing it together on a large sheet of paper. Next, she cuts a hole in the paper and drapes the print over herself, poncho-style.

“It’s so expensive to do it in fabric, so I have to see if it slightly works on paper first,” she said. “Out of a print, I may get 10 to 30 ideas, but I initially need to feel that two or three will work before I invest in screens” for printing.

She starts with fabric, then decides on the cut. “The print dictates the dress cut, not the other way around,” she said.

Which lead to another emphatic point: Textile designers, the “Cinderellas of the business” as she sees them, deserve more recognition.

“If you see a fabulous Chanel suit in a beautiful weave on the runway, you can be sure Karl [Lagerfeld] didn’t design [the fabric],” she says. “I’d like to see more credit given to textile designers for all their work done in the background.”

She doesn’t work out garment prototypes on models, but often on her own short, curvaceous figure. “A model can make a sack look good. If it doesn’t look good on a real body, there’s going to be a problem,” she said.

“I’ve always experimented on myself,” she added, clicking to a series of images of herself made up by the late makeup artist Richard Sharah. One showed a trompe l’oeil veil penciled delicately over her upper face; another featured her with asymmetric blue bangs. She paused for reflection on the shot: “I don’t do blue anymore. It makes my hair go like old straw.”

In fact, Rhodes has always been her own best canvas.

“If you’re not wearing your own clothes, I don’t know what you’re promoting,” she said. At MassArt, she wore a handkerchief-edge tunic with a print of doodled daisies from her spring-summer collection, three necklaces from her latest accessories collection, twice as many bracelets, and a ring the size of a drink coaster. (“People look at me when I go through airport security, but I can be quick with these,” she said, miming funneling off a sleeve of bracelets.)

Despite soaring success in the Seventies with punk looks, toward the end of the minimalist Nineties “it felt like the world had forgotten about me,” Rhodes remarked. No sooner had she begun putting together The Fashion and Textile Museum in London to honor British design, than color came back in and John Galliano and Marc Jacobs referenced her work in their collections. Now her calendar has notations through the end of 2012: She’s designing sets and costumes for operas, a fur collection, accessories and her namesake apparel, sold in a handful of doors worldwide.

“It’s not worrying about what other designers are doing. The world doesn’t need another me-too,” she said. “The difficulty is, do I have another idea I can contribute to the world?” Seemingly, she does. At the day’s finale, a late dinner during which she eventually nodded off before Bilzerian rescued her, she pulled out her agenda and began making copious, microscopic notes in fine-tipped black marker. Next to it was her digital camera, its pink neoprene skin written on in the same pen.

Bilzerian glanced at the camera case, then chuckled. “She’s got her name on it like

a schoolgirl,” he said fondly. “Do you think with her name on it she’ll actually get it back if it’s lost?”