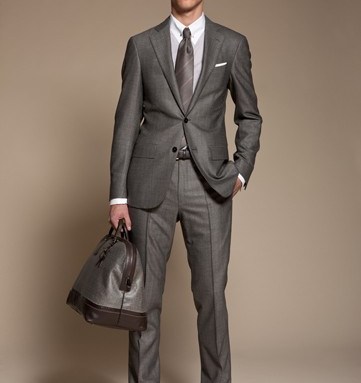 Blood is thicker than water and, in the case of family-owned Italian men’s wear firm Ermenegildo Zegna, which celebrates its centennial this year, it’s also the secret to business longevity.

“This continuity is the best hard evidence of our beliefs and of our rigor in our passionate, restless quest for innovation,” the company’s chief executive officer, Gildo Zegna, told WWD in an interview ahead of the label’s men’s wear presentation, which will be held here on Saturday at the sprawling headquarters on Via Savona.

Founded in 1910 in Trivero, a small village in the Italian Alps, by Ermenegildo Zegna, the son of a watchmaker-turned-wool mill owner, the group has stayed within the family ever since, and in 2008 generated sales of 870.6 million euros, or $1.28 billion at average exchange.

Ermenegildo Zegna passed the reins of the company to his sons in the Sixties — Angelo Zegna, honorary chairman of the group, and Aldo Zegna. The second generation launched the brand’s ready-to-wear label in 1968. The company is run by their children: Gildo Zegna; Paolo Zegna, chairman, and Anna Zegna, image director and head of Fondazione Zegna. Benedetta, Laura and Renata Zegna also are involved in the business.

Gildo Zegna said he expects group sales to decline in 2009 by “high-single digits” compared with 2008 due to challenging business in Europe and America, although sales should grow by single digits in 2010 as consumer confidence returns. “Appreciation for real value,” he said, as well as demand from the emerging markets of greater China and Brazil, are expected to bolster business, as well.

To mark its centenary, the group plans a flurry of new products and limited edition lines under the Ermenegildo Zegna label. Kicking off the festivities, the new decade and the start of the Milan men’s shows, Zegna will unveil its centennial wardrobe, a collection of apparel and accessories, which takes inspiration from the brand’s debut. Ready-to-wear, for instance, features retro touches such as exaggerated lapels, double-breasted jackets and fabrics dating back to 1910.

“Over the last century, Ermenegildo Zegna has been at the forefront of fabric innovation and excellence in natural fibers,” said Gildo Zegna, adding the line will hit stores in July.

To that end, Lanificio Zegna created Centennial Fabric No. 1 — a take on a pattern designed by Ermenegildo Zegna 100 years ago and updated for the centennial collection. A commemorative bespoke selvage fabric, with the inscription “Ermenegildo Zegna 1910-2010,” also will be offered, along with the Centennial Vellus Aureum Fabric, which the label touts as “the world’s finest wool.” With fibers measuring just 10.3 microns in diameter, the fabric will be available for a limited made-to-measure program in May.

The brand will also unveil a limited edition accessories line including an 18-karat rose gold watch by Girard-Perregaux, a fountain pen made in collaboration with Omas and diamond-encrusted rose gold cuff links, all of which will be displayed in showcases surrounding the runway at the Milan show. A limited run of 100 of each of the designs will be sold at Ermenegildo Zegna flagships.

Also in store for 2010 is the launch of an Ermenegildo Zegna book, published by Skira, tracing the history of the label with forewords penned by Suzy Menkes, James Hillman, Daniel Max and Michelangelo Pistoletto. The book will hit bookstores as well as Zegna boutiques in June. The same month, an exhibit will be held at the Triennale museum in Milan before moving to Shanghai in July for the opening of a store there — the label’s fifth flagship worldwide and the largest in Asia — designed by the architect.

According to Gildo Zegna, “Vision and strict discipline, sticking to ones roots, global branding, strong organization with international talent and a stay liquid-cash-is-king” approach have helped shape Ermenegildo Zegna into a global brand. It now counts more than 547 points of sale worldwide, of which 271 are fully owned. Its portfolio also includes the fashion-forward brand Z Zegna, launched in 2005, and women’s ready-to-wear label Lanerie Agnona, acquired in 1999.

“We tightly control materials, processes and craftsmanship. Our vertical integration is a great strength. Our stability allows us to retain the most skilled managers and workers; our financial solidity allows us to continue investing,” Gildo Zegna said.