The Italian brand has five stores in the country, and now — with its new initiative, ZegnArt — an installation at the Dr. Bhau Daji Lad Museum in Mumbai. 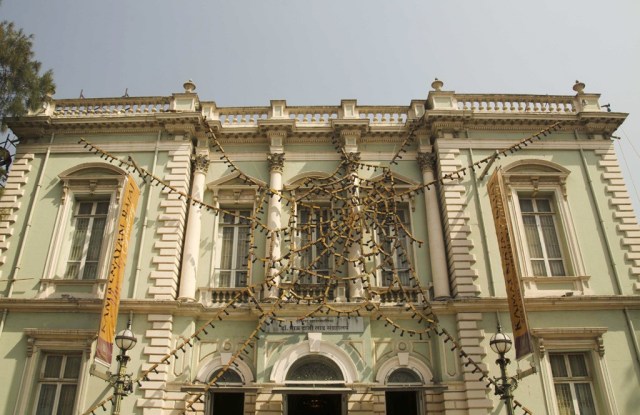 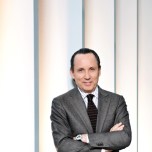 MUMBAI — Ermenegildo Zegna has five stores in India, and now — with its launch of a collaboration with artists in emerging countries called ZegnArt — a giant cobweb in Mumbai.

It’s no ordinary cobweb. Spread across the majestic Dr. Bhau Daji Lad Museum, one of the city’s oldest, it is the creation of Reena Kallat, the artist chosen by ZegnArt Public. The cobweb is made up of rubber stamps with the colonial names of Mumbai’s streets printed on the stamps. The artist explained that this is a form of exploring cultural identity, citizenship and psychological barriers between people.

This story first appeared in the March 6, 2013 issue of WWD. Subscribe Today.

The work was unveiled last week by Gildo Zegna, the company’s chief executive, and his sister Anna Zegna, the company’s image director and president of Fondazione Zegna who curated the exhibition. The cobweb of ZegnArt will remain on the facade of the museum for six weeks, after which it will move on to other locations. Also, as part of the program, another Indian artist, Sahej Rahal, will start a four-month residency at Rome’s Museum for Contemporary Art in August.

“ZegnArt is a visionary project to get closer to the culture of a foreign country. It’s a great way of a marriage between private arm, which supports the idea, and public, which supports the means for a local museum and audience,” Gildo Zegna told WWD. “The rules of the game have to be clear from the beginning; each has to be aware of their roles and responsibilities.”

India is the first stop of the initial three-year plan, with Turkey this year and Brazil in 2014, each with local artists.

“These are relatively new countries for us that are growing fast, to which we wanted to bring something new other than fashion — to show our belief in the culture, the design, the heart, the fashion. Fashion and art and design are all closely related. They are all different sides of the same equation,” Gildo Zegna explained. “These are the three or four things that can work well together and produce a perspective. In India there is a lot of culture, but contemporary art is still not so popular over the country — the façade of the museum helps explain the evolution of the city.”

In business terms, Ermene­gildo Zegna has taken a renewed look at India in recent years, with a joint venture with Reliance Brands signed in 2010. Although the group entered India in 1999, it previously had a franchise and a silent partnership, which has led other brands to become disillusioned with Indian markets.

“Disillusioning, no,” Zegna commented. “We have a long interest, a long-term approach; we don’t give up easily. In China the first innings were not so easy either — now it’s more than 20 years. My hope is that India becomes as big as China.”

Over the past 20 years, Zegna has opened about 80 stores in China.

“India is a challenge, but sooner or later it’s going to develop into a very important luxury market. I see a growing market in India, but the caveat is that there are not enough luxury malls,” Gildo Zegna said. “Without that, it’s going to be difficult to grow in locations within hotels. Street level for the time being is mission impossible. I remain positive about the market here, provided there is a luxury infrastructure where luxury brands can support each other.”

Investment in emerging markets has been a strength for the Zegna brand, and Gildo Zegna is willing to put time and money into it, both as art and as business. “Emerging markets are very important. In Western markets it is lucky if you grow in single digits. You can easily grow in double digits in emerging markets if you know what you are doing. China is the largest and fastest growing at the moment; in 2010 China surpassed sales in the United States. Other important markets include Russia, Brazil, Mexico — and I would not discount the Gulf countries, which are growing quite well. We are considering relaunching in Singapore, where there are strong opportunities, and we are looking at Africa — Morocco, for instance. Nigeria is a new frontier; we are going to approach it gradually. The growth is continuing, but unless you are structured around the world it is impossible to develop,” he said.