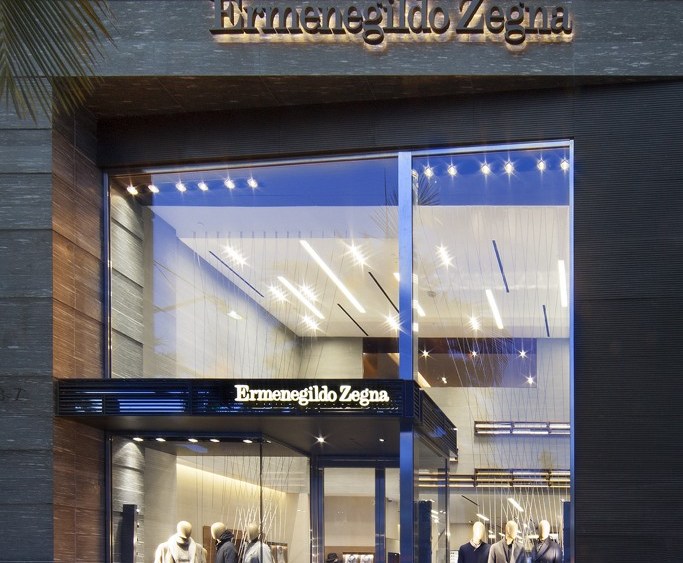 Ermenegildo Zegna is making a major retail push in the States this summer.

Last weekend, the company opened a relocated and redesigned store on Rodeo Drive in Beverly Hills, a move that will be followed this Sunday by the debut of a revamped unit on Michigan Avenue in Chicago. In November, a smaller store will open in Dallas’ Highland Park Village.

“We’re doing what we said we would do in America, which is to open a few new stores,” said Gildo Zegna, chief executive officer of the Ermenegildo Zegna Group. “And we’re following through on that.”

The 5,800-square-foot Los Angeles unit at 337 North Rodeo Drive was designed by Peter Marino and showcases the company’s assortment of Ermenegildo Zegna tailored clothing, sportswear, accessories and fragrance, as well as the Zegna Sport collection, over three floors. The store will also be one of only three in the States to offer the Couture collection designed by Stefano Pilati when it arrives for sale later this year. Zegna and Pilati are expected to make an appearance in the store in November to introduce the collection, which is being offered in no more than 50 stores globally. It is expected to be priced 50 percent higher than the company’s flagship line. “We’re looking forward to our personal appearance,” he said. “We’re doing a similar presentation in China to promote and present the line.

“L.A. is a great location,” Zegna added, noting that in addition to the Couture collection, the store also offers a special luxury room on the top floor, designed for personal shopping and VIP appointments.

The store features modern furnishings such as a pair of lounge chairs designed by Milo Baughman, a set of Artona armchairs by Afra and Tobia Scarpa and a Gio Ponti sofa and two lounge chairs taken from the Hotel Parco dei Principi in Rome. This furniture is complemented by specially commissioned artwork.

“The furniture and the contemporary art in the store make it more attractive,” Zegna said. “It’s what we needed in L.A.”

Since opening last Saturday, Zegna said sales have been strong. The unit has traditionally attracted a lot of Asian travelers, but Zegna said this unit and the flagship in New York are drawing in more Latino and Russian visitors as well.

“Forty percent of the luxury business is done by visitors,” he said. “So we want to make sure we capture that.”

The Chicago unit, which has been expanded to 4,300 square feet by the addition of a second level, is located at 645 North Michigan Avenue. It is based on a Marino design and executed by Zegna’s in-house architects. This store, too, will carry the full range of Ermenegildo Zegna and Zegna Sport apparel and accessories and features a Sartorial room on the second floor for its Su Misura made-to-measure service.

The store also marks the addition of Zegna’s Personalization Project, a program of made-to-measure custom clothing and accessories that will make its debut in September at only this store, New York and Beverly Hills in the States.

“We do a strong business on Michigan Avenue,” Zegna said, “especially with made-to-measure, so we’re introducing Personalization there. We really think there’s room for expanded growth there.”

In Dallas, Zegna is taking over a portion of the space of its former customer, Pockets, which is closing. With only 1,776 square feet of selling space, the unit will offer Ermenegildo Zegna Sartorial and Upper Casual collections along with leather accessories, fragrance and eyewear.

Because of its size, “this store will be more focused than the others,” Zegna said.

With the opening of these three stores, Zegna said this “wraps up our new store program for this year. We think it’s a good balance with these stores between wholesale and retail. We want to maintain our business with Neiman Marcus, Saks, Nordstrom and Barneys [New York], but we also want to build brand awareness by opening stores in key locations.”

Zegna declined to provide details on the retail rollout plan for 2014, saying the plan has not yet been approved by the company’s board. However, he did hint that he expects to open one to two additional units in the States next year.

Worldwide, there are 543 Zegna stores in more than 100 countries, 303 of which are company-owned.

Overall, retail accounts for about one-third of Zegna’s $1.26 billion business with wholesale making up the remaining two-thirds. In the U.S., however, the wholesale-to-retail ratio is closer to 50 percent.

“We think that’s a good average,” he said. “We have good partners in America and we want to maintain those relationships.”

Dollar amounts have been converted at average exchange rates for the periods to which they refer.