The Ermenegildo Zegna Group is heading Down Under as part of a slew of projects this year. 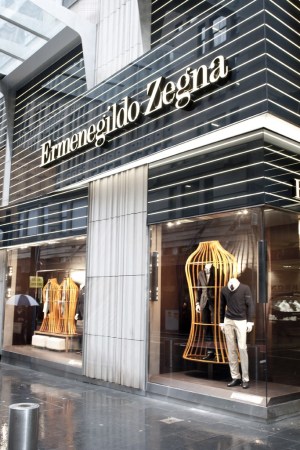 MILAN — The Ermenegildo Zegna Group is heading Down Under as part of a slew of projects this year.

This story first appeared in the April 18, 2013 issue of WWD. Subscribe Today.

On the back of another strong year, Zegna is planning a major two-day event in Sydney Monday and Tuesday to mark the 50th anniversary of the Ermenegildo Zegna Extrafine Wool Trophy and the excellence of Australian merino.

Looking beyond Australia, chief executive officer Gildo Zegna is expecting growth for the company in 2013, but said it is “very difficult to make forecasts in the short term — it’s a watch-and-see phase.”

He said the company would “stay the course,” investing “more than last year” in capital expenditures and marketing; opening 20 to 30 stores; rolling out its new Uomo fragrance under a license with Estée Lauder, and unveiling collections under Stefano Pilati. Pilati started Jan. 1 as creative director of the group’s Agnona women’s line and head of design at Ermenegildo Zegna, with responsibility for that brand’s fashion show as well as for the Ermenegildo Zegna Couture collection. (Pilati will not be attending the Sydney event.)

To support its growth plans, the company, which is headquartered in Italy’s Trivero, near Biella, will open a new expanded manufacturing plant in Novara in the first half of 2014.

Last year, the company posted revenues of 1.26 billion euros, or $1.61 billion, up 12 percent compared with the previous year.

The executive characterized 2012 as “smoother” than 2013, as the first three months were “slower than expected.”

China, he remarked, is “slowing down, and, after the change of leadership, there is no return to what it was like before, but the market is still growing.” The number of Chinese shoppers has decreased in Europe and in the U.S. in the first three months, but Zegna wondered if they were perhaps choosing other locations, such as Hong Kong and Macau, for example, which showed a “very positive” performance.

He identified the U.S. as “spotty and uneven,” varying depending on the city.

Europe’s capitals are helping to lift business in the continent, but he said foul weather and psychological issues are reining in some spending.

He singled out the Middle East and Russia as “perhaps among the few areas that are not suffering,” while Brazil has “stalled” and India is still too small in the world of luxury.

China remains the company’s main market, followed by the U.S., Italy and Japan, which Zegna said is showing signs of recovery. Retail currently accounts for around 70 percent of the group’s sales and Zegna underscored the company’s ongoing efforts to avoid aggressive discounting.

A big unit in Osaka, designed by Peter Marino, is expected to open in the first half of the year. Additionally, a boutique on Rodeo Drive in Los Angeles will open in the summer.

The executive touted the beauty and “bountiful resources” of Australia, which is emerging as a top tourist location for the Chinese and others. Zegna has been present in the country for 30 years and is slowly changing its distribution from wholesale to retail, which now accounts for two-thirds of its sales in the region. There are eight stores locally, including one in Sydney that opened in 2012 and another that was unveiled in Brisbane earlier this year; two more are in the works. Zegna’s first directly operated store in the country opened in Melbourne in 2002.

For the event next week, Zegna is partnering with The Woolmark Co. and will show its fall collection, stage an installation with multimedia projections, organize a party at the historical Royal Hall of Industries and host a tour of top wool growing farms in New South Wales.

The brand also will unveil a dedicated capsule collection featuring an exclusive new fabric, Trofeo Natural Comfort, in a pied-de-poule pattern, which is inspired by the model the company produced in the Sixties from the first winning wools. The pieces will bear the Ermenegildo Zegna 50th Wool Trophy 1963-2013 Anniversary label. There will also be products with printed fabrics in two patterns inspired by aboriginal “dot art” paintings, paying tribute to that native culture.

The company has a history of supporting the arts and has tapped American artist Kiki Smith to design the award this year. The trophy has awarded and rewarded the Australian wool growers’ commitment to quality annually since 1963.

Almost 300 guests, journalists and top clients will attend the event, along with celebrities such as Australian actor Chris Hemsworth and Australian actress and model Megan Gale, Korean-American model and actor Daniel Henney and Hong Kong-based actor and singer Leon Lai.

“This event is a novelty for the area, and we’d like to create interest in the region, after so many recent events held in China,” said Zegna in an interview at his Milan office ahead of his departure for Sydney, where he will be joined by his sister Anna, the company’s image director and president of Fondazione Zegna, and his cousin, chairman Paolo Zegna.

The Zegnas have family memories connected to the trophy and earlier trips to Australia. “It was a must to visit the farms, and a way to understand the business our family had built,” said Zegna. “The life of wool growers was not always easy,” he added, comparing wool to other commodities such as steel or copper. “Wool is booming again now,” he said. “This is a moment in time when raw materials are more expensive, but for next summer, silk is more expensive than wool.”

Zegna has built its collections and reputation on fine and superfine Australian wool and the company has invested in efforts to evolve the fineness and excellence of the fiber over the years. The ceo also noted that wool is making its mark in active sports, no longer the realm of man-made fibers alone. “The U.S. is among those countries that responded before others,” he said.

In other news, the company said that it has signed a three-year deal with the Maserati car company to collaborate on a limited edition Maserati Quattroporte by Ermenegildo Zegna. The car will be introduced next year, the date of Maserati’s centennial, and will offer colors, materials and trims inspired by the Zegna collection in fabrics produced by the company’s woolen mill, Lanificio Zegna, in Trivero. Only 100 of the cars will be produced.

NEXT: Woolmark’s Fabrizio Servente Gives the Skinny on Wool >>

THE SKINNY ON WOOL

An interview with The Woolmark Co. global strategy advisor Fabrizio Servente provides hard facts as well as more lyrical details. Case in point: “There is nothing more natural than wool, a fiber made of sun, grass and water.” Woolmark has partnered with the Ermenegildo Zegna Group, its first-ever license in 1964, to mark the 50th anniversary of the Ermenegildo Zegna Extrafine Wool Trophy and the excellence of Australian merino. “We strongly believe in this project, which is perfectly in line with our wool promotion,” said Servente, who helped choose the seven wool growers for the event and will provide insight into the first steps of the wool production process. “It’s a fantastic endorsement from Zegna and this is a great opportunity to focus on the origins and quality of wool.”

Here are a few statistics on wool:

• Australia stands as the world’s largest producer, accounting for 85 percent of the wool used in the fashion and luxury sectors.

• Australia has been producing the best merino wool since 1805, when the first merino sheep flocks were sold by the English king to Australian John Macarthur, who took them to Sydney.

• The Australian flock of more than 72 million sheep is composed of about 70 percent merinos.

• In the Western world, consumers spend around $75 billion annually on wool apparel.

• Wool is separated into grades based on the measurement of its diameter in microns and also its style. Ultrafine Merino is less than 15.5 microns (1 micron equals 1 thousandth of a millimeter in diameter). The finest wool is 10.4 microns, invisible to the naked eye. One human hair is between 60 and 90 microns.