A century after Ermenegildo Zegna launched a new kind of Italian textile business, hisgrandchildren give new meaning to his global vision. 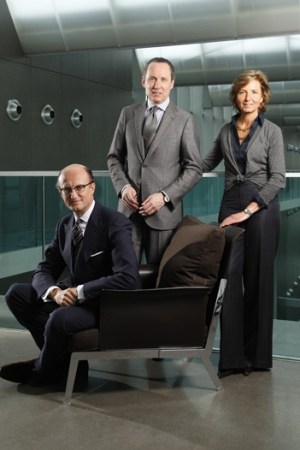 May 11 is a significant date in Trivero, in the lush foothills of the Italian Alps, where Gildo and Paolo Zegna prepare to address 500 weavers on the distinguished past—and future—of their company. It was on this day in 1910, exactly 100 years ago, that an 18-year-old Ermenegildo Zegna opened a wool mill with a simple yet lofty goal: to produce fabric that was, as he put it, “the most beautiful in the world.”

In observation of Z Day, the founder’s grandchildren speak intently to the weavers—some of whose forebears also worked at the mill—about the crucial importance of preserving that ambition.

“Without the passion, drive, dedication, creativity and efforts of all the generations that have accompanied us on this long, 100-year journey, the dream of our founder, Ermenegildo, would never have come true,” says Gildo, chief executive officer of Ermenegildo Zegna.

His cousin, Paolo, chairman of the luxury suit maker, adds, “The future is uncertain, as we know, but we are sure [that] together, our tenacity and vision will lead us to even greater achievements.”

Although this year officially marks Zegna’s centennial, the Italian company’s roots reach back even further than that—to the 19th century, when Angelo Zegna, a watchmaker by trade, swapped some of his timepieces for four wool looms. He later turned them over to Ermenegildo, the last of his 10 children, who established the Lanificio Zegna mill in his hometown.

Adjacent to the Trivero factory, an imposing manor, which Ermenegildo built for his sons, Aldo and Angelo, overlooks the cascading rooftops of the bustling mill and the verdant valley below. “This is where we grew up,” says Gildo’s sister, Anna Zegna, sitting in the glass gallery of the family home, known as Casa Zegna, now a museum and textile research center, the day before her brother’s speech. “We never realized we lived so close to the factory because the factory was like an extension of our house.”

Also nearby is Ermenegildo’s original palatial home, maintained as it was during his lifetime: The founder’s elegant navy suits still hang in his armoire.

“The locals would call him Il Signor Conte, not because of the title, but out of respect— as he respected them,” says Anna, who is image director and president of the group’s philanthropic arm, Fondazione Zegna. “[My grandfather] knew all his workers by name, and he shared everything with them. What he built around [the factory] was to help the community.”

Flipping through the pages of the recently published Ermenegildo Zegna Centennial Book, Anna stops at a photo of her impeccably dressed grandfather—in an exquisitely tailored suit, hat and cane—walking with his wife, Virginia. “He was severe, but his soul was very human,” she recalls.

In the center of the village, just a short stroll from the factory, a school, a hospital, housing facilities, a gymnasium and a swimming pool stand as legacies of Ermenegildo’s public spirit during the Thirties. The company founder also constructed Panoramica Zegna, a country road that today provides a spectacular view of Oasis Zegna, a nature reserve that covers more than 60 square miles.

“He was a visionary, an ecologist and a philanthropist before the words were commonly used,” Anna says of her grandfather, adding: “He had what we call today a sustainable vision of the future.”

Add to that a flair for international business and a passion for luxurious fabrics made with the finest fibers. Although his vision was lofty, Ermenegildo never ruled from an ivory tower: Tin boxes stored at Casa Zegna still contain notebooks with his handwritten entries, including the fabric composition for every client order.

“The spirit of the entire company evolved around this: an eye for detail and quality, but also the ability to be open minded, in order to really understand what people wanted,” says Paolo, just back from Australia, where he presented the Ermenegildo Zegna Vellus Aureum Trophy for wool.

The company’s support for local fiber producers dates back to 1963, when Zegna introduced its Extrafine Wool Trophy. Some may find it difficult to imagine a fiber measured in microns as a building block to a billion-dollar enterprise. But at Zegna, the connection between minute details and global ambition appears natural—the result, a vertical structure that enables the family to control every step of its business, from fiber choices to retail distribution.

Ermenegildo first traveled to New York in 1938 in an effort to introduce his fabrics to Italian tailors, whom he saw as a conduit to the American consumer. By 1945, Zegna fabrics were sold in more than 40 countries. But it wasn’t until 1968 that the founder’s sons—Angelo and Aldo, who had taken over for their father earlier in the decade—opened a suit factory in Novara, Italy, and launched the brand’s clothing business. Even then, they aimed for international growth, starting with Spain and Switzerland.

“My uncle and father also tried— similar to Ermenegildo—to anticipate the times,” Anna says. “I remember when they first traveled to Japan, they told us, ‘We must understand the Japanese attention to detail.’”

Yet the company’s most dramatic expansion has come under the watch of the current generation—Gildo, Paolo and Anna—with the help of other family members: Benedetta Zegna, talent manager; Laura Zegna, director of Oasi Zegna, and Renata Zegna, who sits on the board.

While classic tailored clothing and luxe sportswear remain the company’s bread and butter, bold ventures beyond its traditional core business have helped fuel that growth. Zegna acquired a women’s label, Lanerie Agnona SpA, in 1999, and formed ZeFer, a joint venture with Salvatore Ferragamo SpA to produce footwear and leather goods, in 2002. Since 2003, it has signed a series of major licensing deals, for fragrances, eyewear and underwear. In 2005, the company unveiled the fashion-forward Z Zegna brand—a radical move for a traditional Italian suit maker—and a year later, it partnered with Tom Ford as the designer launched his men’s wear line. All of which contributed to a vast business: Last year, Zegna reported sales of 797 million euros, or $1.11 billion at average exchange.

An aggressive global retail push also helped boost the top line. It began in the Eighties, when the group completed its move toward vertical integration with the opening of the first single-brand Zegna boutiques, first in Paris and then in Milan. The company today has more than 550 stores—300 of them directly owned—in 86 countries. These stores account for 70 percent of the company’s total sales, and 50 percent of its retail business is in Asia.

Zegna was a forerunner in China—by last year, the brand’s largest market—where it began investing in retail as early as 1991. “It was a very bold move,” Gildo says, noting the company will hire a total of 300 people in Greater China this year.

Sitting in the sprawling steel and glass Milan headquarters that Zegna built in 2007, Gildo reflects on the way his grandfather’s values still apply to his everyday work. “I learned from my grandfather to have a long-term view and to always set an example,” he says. “I set an example of ambition, but being fair. Being strong sometimes means being unpopular, but that’s life.” And, he adds, “I learned the hard way.”

The 54-year-old ceo started his career in retail, as an assistant buyer for Bloomingdale’s in the late Seventies, before heading up Zegna’s nascent U.S. division in the early Eighties.

An avowed workaholic, he inherited more than just boldness and values from his grandfather. In the Thirties, Ermenegildo was “determined to get the better of his British rivals,” according to his son, Angelo, who today is the group’s honorary chairman.

Gildo exhibits a similar competitive streak, fueled by a passion for the business. “If you’re not competitive, you become complacent,” he says. “We’ve moved quicker than the others in the last couple years. We raised the bar in terms of benchmarking. You really have to benchmark with the big boys in luxury.”