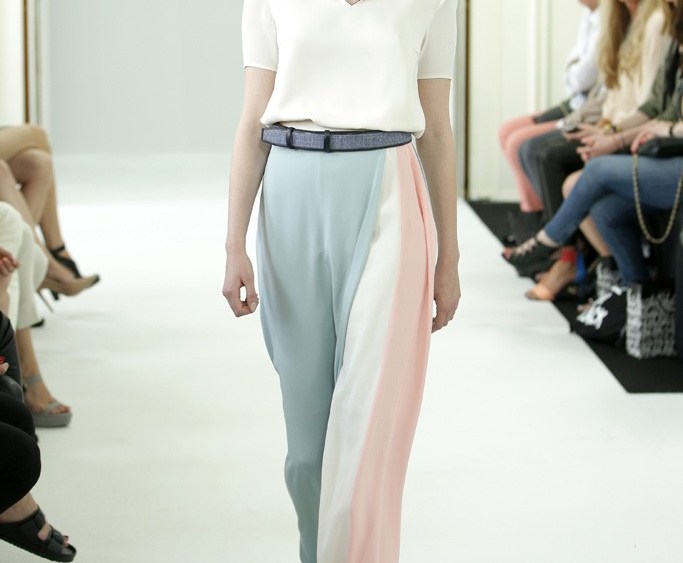 Dawid Tomaszewski: Always a reliable source of embellished elegance at MBFWB, this time Tomaszewski toned down the glitz with appealing results. Taking a black-framed wicker and tubular steel chair by modernist furniture designer Marcel Breuer as his inspiration, he interpreted a latticed wicker pattern in a print, for a crochet and in appliqué work. The designer’s patterned and neutral evening caftans, lanyard-cinched gowns and trim dresses felt modern and relaxed.

Hien Le: One of Berlin’s leading proponents of clean, pared-down styling, Hien Le’s silhouettes for spring had their origins in athletic basics, but were more city-bound than sports-bound in high sheen cottons, warm Alcantara and supple silks. He showed new versions of his signature white shirt and played with a winged dragonfly print, but his less-is-more approach really took flight in coral and tomato silk dresses and separates, accented with the kind of subtle detail his devotees adore but many others miss.

Ivanman: MBFWB first-timer Ivan Mandzukic’s men’s wear both challenged and delivered. Back treatments — which ranged from barely-there to net or other sheer inserts — provided intriguing views from all angles. He capably reinterpreted his more daring looks into street-worthy versions, substituting black for pink, or stitched geometric details for graphic insets, but all targeting a fashion-forward man.

Lala Berlin: Lala Berlin designer Leyla Piedayesh showed a sexy-tough lineup of slim-fit pants, flowing maxiskirts and dresses, leather crop tops and plunging arrow-neck dresses. Jungle prints and images abounded on separates and her signature knitwear, which this time was coaxed into new and novel shapes. A black-and-white print of a shark-infested island scene made for charming HotPants, while a water-colored, faded Ikat print added an airy feel.

Michael Sontag: Michael Sontag added sparkle to his sophisticated simplicity, using just the right amount of Swarovski crystals to accent his intricate silk constructions. Flashes of orange draped around pastels like a ray of sun peeking through at dawn, as white and athletic gray T-shirts comfortably slouched under apronlike halters and topped easy wide-leg trousers.

Vladimir Karaleev: Cut, no hems please, asymmetrically piece, fold and drape: Vladimir Karaleev stuck to his basic methodology, but gave his consciously haphazard looks a more polished look despite using often coarse or industrial fabrics. On opposite poles, denim figured for the first time, as did a more tactile jacquard that he said “looks couture in a tacky way.”