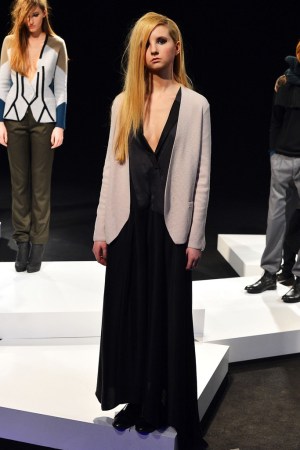 Color and comfort were key for 1913Berlin’s lineup, this one named Evocation. The mostly cashmere looks by designer Yujia (who goes by one name) included wrapped scarves, fingerless gloves and legwarmers. Shaped, structured blazers were worked with a back peplum effect and inset colorblocking; the men’s versions were longer and cozier, single and double-breasted, and paired with silk trousers cinched at the ankle for a sporty look. Bright orange, yellow and turquoise popped among neutral tones, while a graceful fan pattern was repeated in a loose knit and woven in yokes as contrast decoration.