Consumers will spend about $5.6 billion prepping for Super Sunday on everything from jerseys and caps to high-definition TVs and salsa. 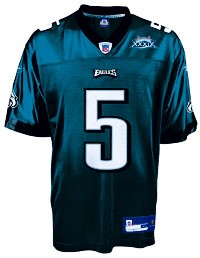 NEW YORK — Football fans will gleefully slap down their credit cards and cough up cash for the Super Bowl. And it’s not just for bean dip and beer.

Consumers will spend about $5.6 billion prepping for Super Sunday this year on everything from jerseys, caps and memorabilia to high-definition TVs and, yes, salsa, according to the National Retail Federation.

This national rite “can make a retailer’s year if they have one or two of the championship teams in their marketplace,” said Kenny Gamble, senior director of National Football League merchandise for Reebok Ltd.

This game is particularly important for retailers in Philadelphia and New England.

Eagles partisans have been waiting since 1981 for their team to return to the Super Bowl, when the Eagles were crushed by the Oakland Raiders, 27-10. The team hasn’t won an NFL championship since Dec. 26, 1960 — before the Super Bowl existed — when the Eagles defeated the Green Bay Packers 17-13.

“We are having complete Eagles frenzy,” said Jennifer Gorski, director of mall marketing in the Philadelphia region for Simon Property Group Inc., the largest U.S. mall owner. “It’s absolutely insane. There are people in this area that have waited if not all their lives, then most of their lives for this.’’

At Simon’s malls in Philadelphia and Delaware County — “we don’t go into [Pittsburgh] Steelers territory” — sales of licensed product is soaring. “Millions of dollars in sales just in Philadelphia” would not be an overstatement, she said.

New England Patriots fans, on the other hand, have seen their team win two of the last three Super Bowls. The Foxboro, Mass.-based Pats have no underdog cachet, but may be on the verge of that most elusive of professional sports goals — a dynasty.

And it has led to big business in branded merchandise.

The Super Bowl marketing and merchandising blitz for apparel and novelties starts early and comes from a multitude of angles. As the number of teams in contention narrows, Reebok executives, for example, who have exclusive rights to all locker room product and headgear for the NFL, take aggressive merchandising steps for successful teams and hot players.

“It starts during the regular season, when you’re getting a feel for a team’s performance,” Gamble said. “This year it was Pittsburgh, Philly and New England. It’s like legalized gambling.”

Retailers eager to cash in on a hot market — any time a local team is on a winning streak or has a new star — establish pricey ad campaigns with media outlets. The promotions are pegged to when a team wins.

Some go a step further. This year Modell’s Sporting Goods will preprint limited runs of championship merchandise of both possible Super Bowl winners. The items are aimed at fans who literally run out to buy T-shirts and hats immediately after the game.

Even mall owners are getting in on the fun. New England Development, a shopping center owner and developer, posted signage around entrances of its properties after the Pats won the division title. The company promoted that its malls were selling championship merchandise and directed shoppers to sports stores that sold the gear. Similar tactics were used in Philly.

“Nothing happens in New York that changes and dominates the retail market,” said Steve Gartner, president of Metro Commercial Real Estate Inc., a retail leasing and management expert in Philadelphia. “But in a town like Philadelphia…people are looking for Eagles gear. It makes for an interesting few weeks.”

Though it may not be the red carpet, fans are especially conscious of what they wear during Super Bowl season. Branded apparel, pins and other items like championship footballs and coffee mugs make up a significant chunk of overall Super Bowl-related spending in January, which also includes electronics, groceries and tickets. The NRF expects that consumers will buy as many as 6.2 million pieces of team apparel and accessories.

The selling season for team and branded apparel in stores such as Modell’s, Dick’s Sporting Goods, City Sports, Champs and Foot Locker, can extend from early January until late February, a traditionally slow time for retailing. The Super Bowl provides a welcome reprieve.

“This time of year, most retailers are in markdown mode and getting rid of any old inventories and team apparel that is underperforming,” said Reebok’s Gamble. “But you can sell Super Bowl and other team gear at full price, and people will buy for four to six weeks after the event.”

For Modell’s, a major regional business in the mid-Atlantic and New England regions, the season couldn’t be sweeter. The retailer opened stores early on Jan. 24 — the day after the American and National Football Conference divisional championships — to crowds of fans eager to buy.

The best-selling items so far have been the divisional championship hats, replica jerseys and T-shirts with Super Bowl patches, and dueling merchandise, which feature both the Eagles and the Patriots. At Champs, branded jerseys are touted as must-have items while NFL Most Valuable Player and Rookie of the Year T-shirts are still hot-pick items.

“Divisional championship merchandise was hot a week ago, but that becomes less and less exciting closer to the Bowl,” said Samira Zebian, director of sports marketing at Modell’s. “You’re not walking around in a divisional hat anymore.”

Reebok plans to launch a commemorative Super Bowl merchandise package at the end of February. And while the company isn’t taking sides, retail experts said there could be a bigger boost if the underdog Eagles upset the Pats.

“People are so passionate about their teams,” Zebian said. “Nothing quite compares to the hysteria the Red Sox winning the World Series, but the Eagles haven’t been in the Super Bowl for almost 25 years. There is a frenzy of people who want to capture a piece of history, regardless of what the item might cost. They want to celebrate their team.”

Given that most of the country will celebrate at home, many of the latest electronics and home theater gizmos are must-haves. Just as fans run out to buy the championship hats their players are wearing in the locker room, they want to get as close as possible to the sweaty, grunting glory of the game with high-definition television and the best possible sound system.

The NRF predicts consumers will buy 1.4 million TVs and almost 530,000 pieces of furniture, including entertainment centers, specifically for the game. And with the Super Bowl broadcast in high definition, HDTVs are among the top sellers for retailers such as Best Buy and Tweeter Home Entertainment Group.

“The game has been in HD before, but this year more people are aware of what HD actually is,’’ said Kate MacKinnon, spokeswoman for Tweeter. “People have upgraded their television in the past year or have been planning to, and this is the first major HD event for them. Comcast Corp. is also heavily promoting their HD cable box before the Super Bowl, which makes HD a lot easier for consumers to handle.”

December and January are the two biggest television sales months for Tweeter, which offers special delivery promotions for the Super Bowl: any television purchased before 6 p.m. the night before the Super Bowl will be delivered and set up in time for kickoff on Sunday.

Best Buy’s “Official Home Theater Play Book,” a marketing and coupon package designed like a football play book, offers “strategies” on how to score a home theater system worthy of the championship game. Like Tweeter, it also guarantees game-day delivery and offers 36-month interest-free financing for fans upgrading their systems in January. But perhaps the story of the Super Bowl’s power is better told by Best Buy’s way of wooing fans with team spirit rather than pure financial incentives.

“In store, we set up the home theater area with green turf, and all of the salespeople are in referee shirts,” said Best Buy spokesman Jay Musolf. “People are just so excited about the game. It gets them in the mood to shop.”

WHO: The New England Patriots vs. The Philadelphia Eagles
WHEN: Sunday, Feb. 6, 6:30 p.m. EST.
WHERE: Alltel Stadium in Jacksonville, Fla.
ENTERTAINMENT: The Ameriquest Mortgage Super Bowl Halftime Show will feature Paul McCartney (sans defective costume); pregame will feature Alicia Keys and Black Eyed Peas.
TICKETS: Between $5,000 and $20,000 for a pair of tickets on the lower levels.

Not Just Any Bowl