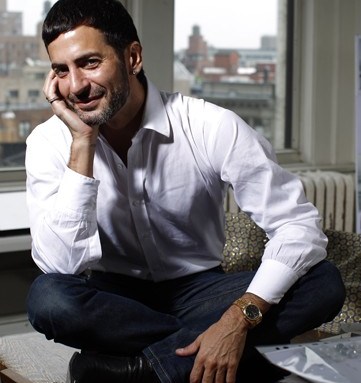 Marc Jacobs has spent his entire career under the glare and provocation of the spotlight. Catapulted to fame by a remarkable Parsons School of Design graduation effort in 1984, he has kept the fashion world fascinated ever since, through grunge, trompe l’oeil, cashmere thermals, retro riffs, audacious collaborations at Vuitton and, yes, plenty of controversy. Along the way, Jacobs’ shows have remained among the most anticipated anywhere, his perspective celebratory at heart, and his approach fearless. “The only thing that looks wrong on everybody,” Jacobs has said, “is insecurity.”

“Girly-girl” is not a phrase that leaps to mind in reference to British designer Phoebe Philo. The creative director for Celine returned to fashion in 2009 after a three-year hiatus and has helped propel the house’s business exponentially. Her streamlined nouveau classics have been widely influential throughout the industry, defining a modern aesthetic that speaks to effortless style. “Womanfriendly,” “grown-up” and “relevant” are often used to describe her mix of clean but modern-with-atwist styles that appeal to customers of all ages.

One thing can be said for Lady Gaga’s choices, fashion or otherwise: She’s fearless. And now she’s overtaken Oprah to top Forbes’ list of the 100 most powerful celebrities on the planet. From her wide array of see-through bodysuits (worn with any number of gravitydefying chapeaux, face masks, multicolored wigs and other outrageous accessories), to outfits made of such diverse materials as bubbles, strings, wire, plastic, netting, cardboard — well, face it, just about anything — she has risen to CFDA fashion icon status. If nothing else, she has consistently avoided committing fashion’s greatest sin: to be boring.

Twice named British Fashion Journalist of the Year, Hilary Alexander, fashion director of The Daily Telegraph of London, can add the Media Award, honoring Eugenia Sheppard, to her honors. She’s also a visiting professor at the University of the Arts, London, which oversees Central Saint Martins and London College of Fashion, and has logged plenty of time as an international fashion broadcaster, too. While she’s retiring from the Telegraph at the end of June, she will continue to supply a page a month to the publication, and no doubt continue to keep in touch on the subject with her 179,000 Twitter followers.

Hal Rubenstein, fashion director of InStyle, has quite a résumé as fashion observer. Among his credits, he created the magazine’s “The Look” section on celebrity fashion, regularly evaluates the red carpet at the Oscars, founded Egg magazine, served as a series judge on Lifetime’s “Blush: The Search for the Next Great Makeup Artist” and a fashion expert on “Tim Gunn’s Guide to Style,” among dozens of other TV appearances and publications.

Board of Directors’ Special Tribute Award

Native New Yorker Arthur Elgort is best known for bringing a sense of action to fashion photography. Since 1971, his work has appeared in British, American and many other editions of Vogue, Vanity Fair, the New Yorker, American Photo, Visionaire, the London Times Magazine and numerous others. He has published five books, been the subject of museum exhibitions around the globe, and shot campaigns for luxury brands including Chanel, Valentino and Yves Saint Laurent.