Joseph Altuzarra of Altuzarra was crowned this year’s Womenswear Designer of the Year.

By Marc Karimzadeh and Jessica Iredale and Taylor Harris on June 2, 2014
View Slideshow 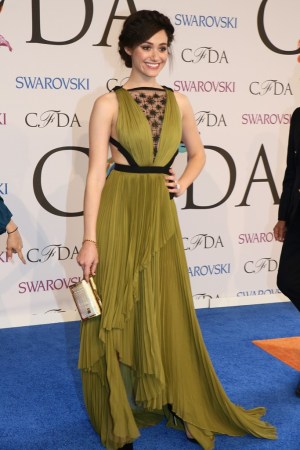 She wasn’t alone in her enthusiasm for RiRi at the CFDA Fashion Awards, held Monday night at Alice Tully Hall at Lincoln Center.

“Duh,” said Wes Gordon. “I am such a dork. I am so starstruck. I would get so tongue-tied and trip over my words.”

James Marsden didn’t have such worries. “I already met her once and said what I had to say,” he kidded. “She would never speak to me again.”

Click Here for a Slideshow of Red Carpet Fashion >>

Rihanna received the Fashion Icon Award, while Tom Ford was honored with the Geoffrey Beene Lifetime Achievement Award. The International Award went to Raf Simons for Dior. Paul Cavaco took home the Media Award in Honor of Eugenia Sheppard, while the Founders Award in Honor of Eleanor Lambert was given to Bethann Hardison. Ruth Finley of Fashion Calendar received the 2014 Board of Director’s Tribute nod.

Jennifer Hudson was buzzing for a simple reason. “Just being here, because I love fashion,” she said. “And Tom Ford and Rihanna.”

Greta Gerwig, for her part, couldn’t wait to see the slew of models on hand. “I am a writer and an actor so I don’t get to see them often,” she said. “They are so goddamn beautiful.”

Solange Knowles wowed in a silvery va-va-voom number by Calvin Klein Collection. “It fits her like a glove,” gushed Francisco Costa.

Alexander Wang brought “Saturday Night Live” alum Chris Kattan, aka Mango, as one of his dates. “Anytime I get to hang out with one of my icons…” said Wang, who enlisted Mango for a project for T by Alexander Wang to be released today.

If there was any pressure on host John Waters to woo the fashion crowd, he didn’t show it — not even with three planned costume changes (arriving in Comme des Garçons, changing into white tie and ending with Rag & Bone).

“The fashion crowd is notoriously tough, but I am not,” he said.

Rihanna, who was dressed in a scandalously sheer Adam Selman design, seemed quite surprised at all the buzz she was generating. “Oh really?” she said. “That makes me so nervous.”