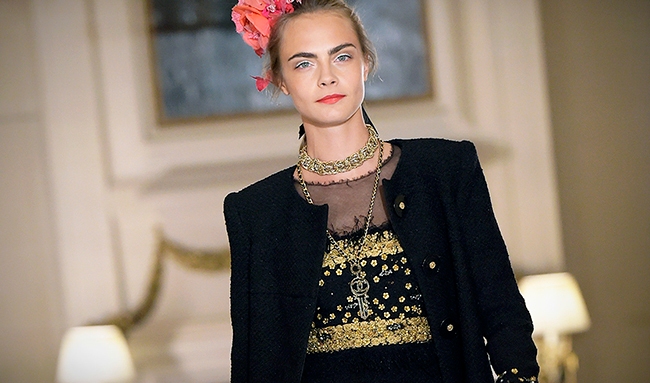 PARIS — Sneakers and puffer jackets are perhaps the most common uniform in luxury hotel lobbies this winter.

But not on Tuesday, when Chanel and Karl Lagerfeld took over the Ritz Paris and sent beauties like Mariacarla Boscono striding across the thick carpets in sophisticated French fashions  — the Italian model in a sultry, fluted dress with a skirt composed of golden eyelash tinsel.

“You have to walk as if you are walking into a chic restaurant, convinced that you are the most beautiful and chicest woman in the world — which you are,” Lagerfeld said during a fitting on Monday for his latest Métiers d’Art collection. He dubbed it “Paris Cosmopolite” to evoke a time when elegant women from the world over converged on the mythic Place Vendôme hotel, established in 1898.

“For me, it’s a certain idea of Paris: Gabrielle Chanel, the Ritz, the Hemingway Bar. This is the kind of Paris everyone would like to bring back,” the designer said.

He confessed to fleeting references to the Twenties and Thirties, when the founding designer took up residence at the famous hotel — a stone’s throw from her Rue Cambon headquarters.

Indeed, once Lagerfeld viewed Boscono’s finished dress, his mind flashed to a 1919 Man Ray photo of Denise Boulet, Paul Poiret’s wife, wearing a camisole and frothy skirt, a Brâncusi bird sculpture behind her.

“An elegant inspiration from a faraway period but with very modern clothes,” Lagerfeld mused. “We live in another world. But you can make a collection that is an evocation in the modern spirit of today.”

To wit: There was even a hooded puffer on the Chanel runway, although with bracelet sleeves to heighten the formality of the black hourglass gown underneath, its fog of tulle brushing the ankles of model Natalie Westling.

The designer wrangled some of his muses and famous friends to walk the show — including Pharrell Williams, Alice Dellal and Lily-Rose Depp — who negotiated tables that had just been cleared of a three-course lunch. Subsequent shows, each with about 300 guests seated at round tables dotting the main-floor bar, restaurant, library and winter garden, came with afternoon tea or dinner service.

“Just putting on the clothes, we all felt a little bit of Coco in us,” said Dellal, who wore a biker customized with her own pins including a glass eye, a scorpion and daisies. She disclosed she’s working on a clothing line using recycled leathers.

Famous offspring who walked in the show included Sistine Stallone, Sofia Richie and Selah Marley, the daughter of Lauryn Hill.

Chanel Starts Puttin’ On the Ritz >>

VIPs at the first show included Stella Tennant, French singer Dani and actress Julia Goldani Telles, who has been in town for a few weeks filming episodes of “The Affair.”

“We’re shooting a scene on the Seine tonight,” she said. “It’s been really cold, but I love it.”

Wearing four strands of pearls and golden CC barrettes nestled in his yarmulke of hair, Williams confessed that walking in the show was “a different experience. It was fun, but when people started cheering, I was worried I would get distracted and step on someone’s foot.”

A gaggle of rising actresses attended the tea time show including Diane Rouxel, Ariane Labed and Tuğba Sunguroğlu. “How to describe the experience of being here? It’s like the sweetest, most delicious French pastry – like a mille-feuille,” said Mathilde Warnier whose latest film, “Wild Boys,” based on the William Burroughs novel of the same name, may be headed to the Cannes film festival. “I play a young boy in it, which was really freeing,” she said.

The fast-paced show was a hoot, with slack-cheeked model Mica Arganaraz debuting a gorgeous smile and Depp beaming as she walked by Bruno Pavlovsky, president of Chanel fashion.

Male dancers in tailcoats were planted throughout the venue and occasionally leaped up to dance with the models. One grabbed Cara Delevingne by the waist and dipped her dramatically. The audience squealed with delight.

A crowd of chicly sapped actors and musicians from around the world attended the evening dinner presentation — including Jada Pinkett and Willow Smith, K-pop sensation and fashion influencer G-Dragon and Gaspard Ulliel.

Geraldine Chaplin said she’s been coming to the Ritz her whole life — starting when her father Charlie Chaplin and mother Oona O’Neill lived there when she was a child.

“I came in and the porter Serge was still there, he said ‘You’re back!'” said Chaplin.

With so many memories at the Ritz, a person could be sad to see it change, but not Chaplin. “The spirit is still here,” she said about the renovation. “It’s just beautiful.”

Rising actress Ella Purnell said it was the first time she’d visited Paris and had some time to explore the city. “The Eiffel Tower wasn’t flashing, but I still saw it,” she said.

The star of films including Tim Burton’s “Miss Peregrine’s Home for Peculiar Children” had just finished shooting her latest project in Cincinnati, an independent film called “UFO.” It was a project for which she didn’t need Chanel. “I ended up wearing a lot of my own clothes for this one,” Purnell said. “I wanted it to feel authentic, and I didn’t want a bunch of new clothes getting in the way.”

Willow Smith, who had given her first acoustic performance at Chanel’s party the night before, said she’d spent the morning working on a “dope” drawing. “You can see it on Instagram,” she said.

She was wowed by the creativity at Chanel events. “What does it take to come up with this?”

The clothes captivated with their gleaming and frothy textures, pronounced shoulders and dressy bent — the kind of ensembles that turn heads in restaurants.

Lagerfeld opened the show with lean jackets, fluted skirts and plus fours the color of heavy cream.

“I’m the son of a milkman, you know,” he smirked during the preview.

With their chunky gold braiding, these ensembles evoked French paneling and gilding, the kind found throughout the Ritz and especially in the Coco Chanel suite.

Patterned knits seemed a wink to the ornate wallpaper and busy carpet patterns found throughout the hotel. But most of the clothes were pure Chanel, from a taut, fringed version of the classic black tweed suit to a dramatic denim coat with ragged thread embroideries in quilted formations.

Lagerfeld introduced this pre-fall ready-to-wear range — embellished with the 10 specialty couture ateliers Chanel owns — 15 years ago, and he challenged them to embed rows of whipped-cream shirring into a bubble-shaped mohair cape and embroider 3-D china patterns onto cocktail suits and dresses.

He also knows how to thumb his nose at house codes. In lieu of gold buttons, he went for Plexiglas ones, and roses were arranged in models’ hair in lieu of camellias, heightening their feminine allure.

Chanel Métiers d’Art Show at the Ritz Paris: All the Looks >>

While the Métiers d’Art show typically travels to a destination — Edinburgh, Salzburg, Dallas — and recounts a chapter of the house lore, real or imagined, Lagerfeld felt it was time to pay attention to France, which has been shunned by tourists in the wake of multiple terror attacks and labor strife over the past year.

“I think it’s not a bad thing for Paris, given all the Paris bashing, which I’m very much against,” he said.

Chanel’s hospitality for international press and top clients included cooking and yoga classes, pastry-making sessions and spa treatments — plus Monday’s welcome party in the first-floor prestige suites, affording views of the Place Vendôme, whose geometry and proportions inspired the stopper of the original No. 5 perfume bottle.

Pavlovksy said Chanel is hosting about 350 clients, including about 200 French ones, and would invite them to re-see the clothes installed in the hotel’s most luxurious suites — whetting their appetite once more ahead of the collection’s delivery next May.

The Métiers d’Art and cruise collections “are getting bigger and bigger in terms of open-to-buy,” Pavlovsky said in an interview, noting that the Paris in Rome collection, paraded in December 2015 in a Cinecittà film studio built to resemble a typical French streetscape of yore, achieved the company’s highest level of full-price sell-through to date.

The executive declined all comment on figures filed with the Amsterdam chamber of commerce showing revenues at Chanel International BV sank 16.9 percent last year to $6.24 billion.

Yet he countered that “the business is strong for fashion,” that the Métiers d’Art delivery has been tracking double-digit growth and that Chanel would likely end this year in positive territory.

In 2015, Chanel began to align its global pricing to reduce the allure of price differentials and to position the brand for an eventual leap into e-commerce. The move was designed to stamp out a rise in the parallel market, mainly in China and Southeast Asia.

“It’s working because we have double-digit growth in Asian countries,” Pavlovsky said.

Asked about 2017 prospects, he said the company needs to be “more and more agile” to adapt to swift changes in fortune caused by currency moves and geopolitical changes.

“Things can change so quickly. Paris has been very difficult, but the past two weeks we have been doing better than the last two years,” he said.

Tuesday’s Chanel takeover at the Ritz was not the first for Lagerfeld, who staged a trio of couture shows — for spring 1996, fall 1996 and spring 1997 — in the same suites that hosted Monday night’s party.

During Monday’s preview, the designer said he’s still mulling possible destinations for Chanel’s cruise 2018 show next May. But he has several collections to design before that, starting with spring 2017 couture, slated for January.

While most designers will soon be puttin’ on the Ritz with holiday and New Year’s Eve celebrations, Lagerfeld plans to be at home with Choupette, sketching up a storm. “I’m working class, my dear,” he purred.