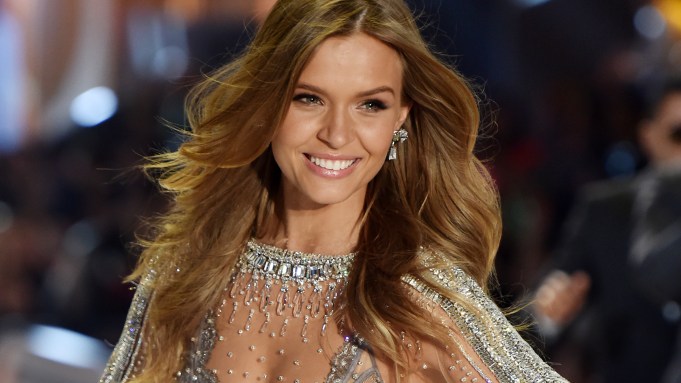 PARIS — Ahh, Paris: The cradle of couture, a hot spot for lingerie, and the birthplace of the expression “ooh la la!”

Victoria’s Secret, what took you so long?

“It’s been a dream for a long time,” Edward Razek, chief marketing officer of Victoria’s Secret, confessed about the brand’s first French showing here Wednesday night, an extravaganza of feathers, flesh and fantasy wings, some the scale of early satellite dishes. “It doesn’t get any bigger than this in the fashion world. Paris is the home of fashion. It’s the home of lingerie and it’s the home of fashion shows.

“It’s a very big deal to be at the Grand Palais,” added Razek, who is also executive producer of the show.

The American firm imported 70 tons of equipment, 18 miles of cable, and 51 of the world’s most bodacious bodies for its annual fashion and music spectacle, to be broadcast on the CBS Television Network and online on Dec. 5. Last year, some 800 million people in 200 countries tuned in.

On Wednesday night, it was the site of back-to-back Victoria’s Secret shows, each before an audience of 1,300 people, to capture the best possible footage of the brand’s winged Angels strutting their stuff on a sparkly, 115-foot catwalk, backed by performances by The Weeknd, Bruno Mars and Lady Gaga, who dazzled the crowd with her spine-tingling vocals, towering heels and split-second outfit changes.

Razek marveled that many of the models arrived in Paris with their personal trainers in tow. “These girls have been killing themselves for six months. The level of physical fitness they’ve achieved is astonishing,” he said. “The models have never worked harder than they have for this show.”

“I did a lot of weight training and resistance training,” said Jasmine Tookes, who wore a fantasy bra set with diamonds and emeralds valued at $3 million. “I like to do a lot of squats because it’s good for the bum — and there are cameras from every angle. So I really like to make sure that my butt looks good.”

A toned butt seemed to be a chief concern backstage.

Alessandra Ambrosio began prepping for the show in September, working out with Tracy Anderson. “I’ve been doing a lot of cardio, dancing cardio with her, which is amazing,” she said. “And a lot of ankle weights for butt lifting and abs.”

Others took the dietary route.

“I have just been really good on my eating, keeping my energy up and sleeping as much as I can,” confided Kendall Jenner. She said the run-up to the show seemed “like a big school field trip. I feel like I was taken back to high school. It’s really enjoyable. I genuinely have a lot of really good friends here, so it makes it even more fun.”

Bella Hadid confessed a soft spot for the city’s Ferris Wheel plunked in the Place de la Concorde. “Nobody will ride it with me,” she bemoaned. “Now it’s really cold, so I’m going to force people tonight to come with me, because I need to do it before I leave.”

Yolanda Hadid described her reaction upon hearing that Bella had been chosen to walk in the show alongside her sister, Gigi. “I cried, it still makes me cry,” she said, welling up. “As a mother, obviously, last year when Gigi got in and Bella didn’t, it was hard.…They say you’re only as happy as your unhappiest child. So this time, they’re both here and it’s a night to celebrate.”

She told her daughters to indulge: “You’ve been eating chicken and salad for months, so enjoy this moment and then let’s go eat some French fries and hamburgers afterwards.”

The slick, high-energy show worked through various fashion themes: romps through Asia, the Alpine region and a collegiate stadium, climaxing with vampish, sultry and ultraembellished lingerie looks and a shower of gold sequins.

It was Dominic West’s first Victoria’s Secret display. “We’re here shooting the final episode of ‘The Affair,’ which is the TV show I’m doing. So that’s why I’m here. I’m in Paris just for two weeks. So I was just actually coming to look at the roof of the Grand Palais, and then I saw all the banners saying Victoria’s Secret.”

“It’s to make you feel confident,” she said. “In high fashion, the inside of the jacket is in silk, very well done, and only the owner can notice it. If you want to seduce, I think you have to seduce yourself before. You have to feel good. And if you feel good, you look lovely.”

Still, there’s not enough fine lingerie on earth to get her to walk a Victoria’s Secret show. “Come on, I’m a granny!” she howled.

Asked if she was harboring any underwear secrets, singer and actress Soko teased: “Like not wearing any?”

Recording her third album, Soko said getting dressed for that is easy. “When I go to the studio, I wear red shoes, red everything. It keeps me focused on being creative,” she said, crediting her favorite movie, “The Red Shoes,” based on the Hans Christian Andersen fairy tale.

Gabriel-Kane Day-Lewis, who is working on an album as well as a line of flannel shirts in collaboration with Olive and the Pepper, called the event “grandiose. The production values are obviously incredible; the beautiful girls, the lingerie.”

Veronica Webb was excited to see the American brand make a splash in Paris.

“And who doesn’t love women feeling beautiful in beautiful lingerie? Everyone loves that, right? I mean, you can’t turn it down, it’s like pizza,” said Webb, who walked in the first Victoria’s Secret show. “I have to say it was a game-changer for me. It was one of the most challenging bookings that I ever had and it really started me off on a high level of fitness that has helped me throughout my life, through work, through motherhood.”

Balmain’s Olivier Rousteing said it was a special night for Paris. “What I love about Victoria’s Secret is it’s so diverse and international and them doing this in Paris is such an honor for the city and the country. It’s just what we need in France: more love, more happiness. We have been through some really tough times and bringing a bit of joy and sun with all those amazing Angels makes Paris happy,” he said. “This is everything I love: pop culture mixed with music fashion, all the strong girls I love together on the runway, I’m here to support them.”

The 21nd edition of the Victoria’s Secret show came to roost in France even though the company only has one beauty and accessories unit at the Paris Orly airport.

Razek did not rule out a Paris flagship one day, but noted that the company has taken a slow and careful approach to international expansion. At present, Victoria’s Secret, part of Limited Brands Inc., counts 19 full-line stores in Europe and 84 beauty units. The brand is also present in the Middle East, with 23 lingerie and 87 beauty stores, and in Asia with one full-line store and 136 beauty locations.

Razek characterized the Paris showing as an ode to the city’s fashion stature, and France’s cultural riches.

While the outfits paraded were not directly inspired by Paris, “any lingerie collection would by definition be inspired by French sophistication,” he said, lauding the legendary je ne sais quoi French women possess and screen stars of yore who popularized sexy and stylish innerwear.

Victoria’s Secret’s dalliance with France kicked off in October when it posted a short film to promote its holiday line. Set at the Château de Vaux-le-Vicomte and featuring models Stella Maxwell, Elsa Hosk, Taylor Hill, Romee Strijd and Sara Sampaio, the film was billed as the brand’s biggest lingerie shoot in history.