Each approaches the category from a different angle, with specific customers in mind. Lange, a New York designer who has developed a following... 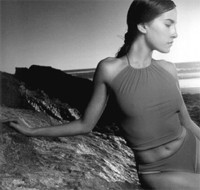 This story first appeared in the November 20, 2003 issue of WWD. Subscribe Today.

Each approaches the category from a different angle, with specific customers in mind. Lange, a New York designer who has developed a following for her stylish maternity apparel, will continue to focus on pregnant women. AXM, a Vienna, Va.-based company, is geared for women between the ages of 30 and 45. Founded by 21-year-old Miami resident Trisha Taylor, Island Company aims to attract the 18-to-35 crowd.

Lange showed off the themes — Tahitian stripe, capri paisley, Mod floral, crochet lace and black graphic floral —in her Madison Avenue office last week. Her six-year-old business philosophy that women should not have to sacrifice style during pregnancy holds true for swimwear.

Made in Brazil, Island Company’s 13-piece swimwear collection, has intricate beadwork, silkscreens and durable fabrics. The line will be offered in 25 surf shop and specialty stores, and will wholesale from $38 to $45. Shoppers will be able to order online at islandcompany.com at the end of the month.

Next year, the company expects to sell at least 10,000 units, Taylor said.

AXM’s founder and creative director, Alisa Marie Beyer, set out to develop swimwear for stylish women over 30 who find junior looks too skimpy and misses’ styles too matronly. Swarovski crystal accents, halter tankinis with tie-backs, double crossback straps and removable pads are among the special features.

The seven-piece collection wholesales from $20 for a two-tone bikini bottom to $45 for a V-neck one-piece. It will be carried in about 16 stores as of January. Last month, the company hired Johanna Freck as lead designer and Toni Glickman as vice president of corporate sales. The firm is expecting to produce 5,000 units in its first year, with the focus being on the U.S. and the Caribbean, Beyer said.