Off the Runway: Four Emerging Brands You Won’t See During Fashion Week 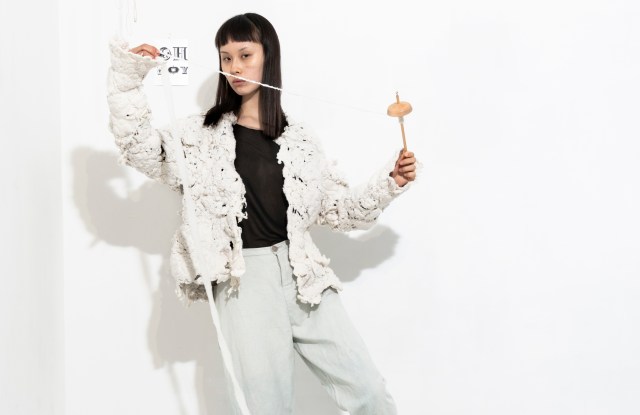 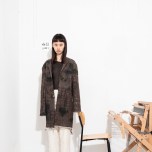 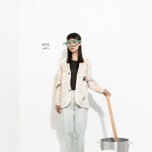 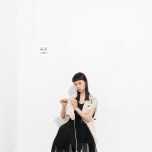 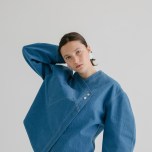 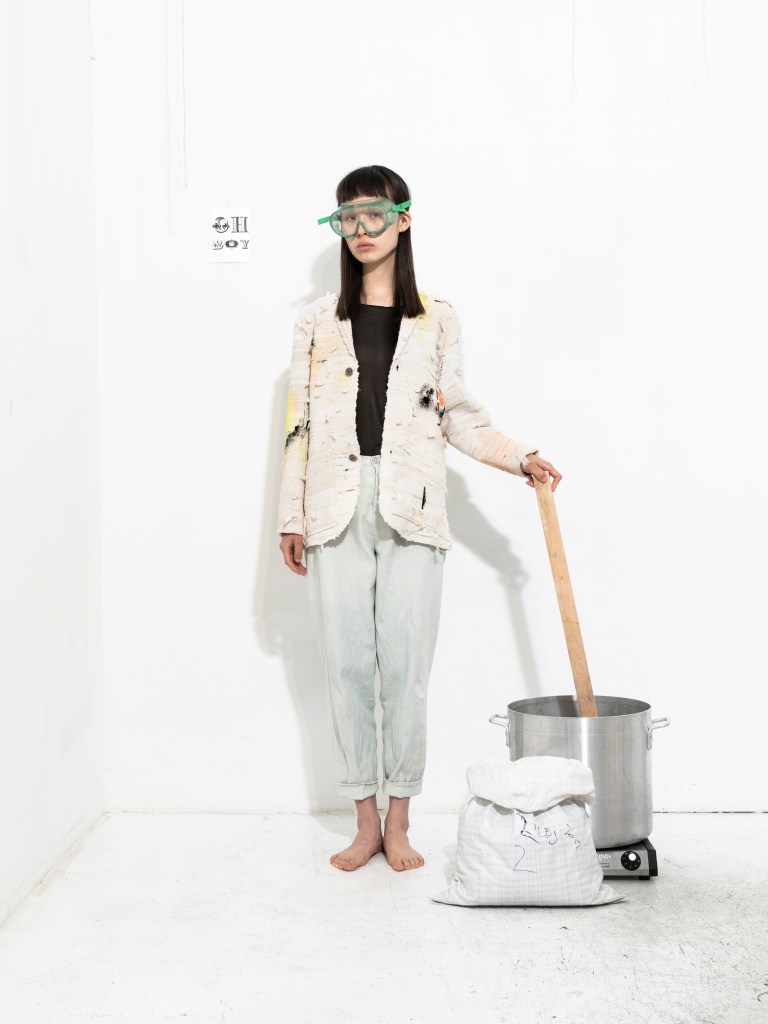 Yoshiyuki Minami is a textile artist whose work through genderless label Manonik can be seen as a critique of the current fashion system.

He’s part of the new wave of young, sustainably minded designers taking a slow approach to production — collaborating with local vendors to source fibers, and utilizing labor-intensive textile-making techniques (with a specialty in hand-weaving) to craft one-of-a-kind artisanal garments. His work truly falls at the intersection of art, design and craftsmanship.

His unique one-off creations are naturally at odds with fashion week’s commercial and fast-paced nature; rather, it’s the type of stuff that begs to be discovered by socially conscious consumers.

Minami began making clothes professionally in 2016 after finishing residency programs at Textile Arts Center and the Museum of Arts and Design. He learned how to finish various textile development processes well so that he could champion an aesthetic of beautiful imperfection through both intentional and spontaneous mistakes.

His process relies heavily on the loom where, at any given moment, he’ll pull a fringe or leave the ends of the spool out to create cool yet random textures. A prime example is a blazer with textural surface of randomly pulled out threads and splashes of colorful textile paint.

“When you weave a cloth, you want everything to be consistent,” Minami said during a preview of his studio. “That’s the goal. But I’m a little rebellious. I like showing the process.”

The name Manonik reinforces the use of handcraft, where “mano” means hand in Italian, one of three languages the designer speaks.

Minami’s process is both unconventional and fascinating. Sourcing the right hemp, felt or organic wool from local suppliers to weave with can take up to a year and a half, leaving him at the mercy of material availability. Once fibers arrive, he’ll spend up to three weeks developing fabric swatches on either the loom, which takes a full day to dress, or a manual knitting machine, to gauge how fibers behave. He favors technical drawings over fashion sketches, which act as blueprints factoring in width, length, and when to create a curve on the loom to follow the body. He’ll sit at either machine for about seven hours every day to eventually create mini collections of no more than 10 items a year. For reference, it takes about four months of nonstop weaving to create 12 pieces. It’s a design process that can be immensely insular.

Naturally, Minami’s original intent was to create one-off garments. Interest from boutiques has him debating whether or not multiple runs of each look is feasible, or aligns with the brand’s fundamental codes.

The interest from buyers is warranted. His work explores tailoring through a genderless lens. Highlights from his last collection include a free-formed felted cardigan, another hand-felted coat with discarded threads used as surface design, and a black toned-down version of the aforementioned blazer with pulled-out process threads on the sleeves.

His next mini collection slated for November will evolve the tailoring concept with baggier silhouettes that can be worn all the time, across occasions. Current swatches he’s toying with include hemp, which softens when aging; discarded threads, and aluminum-lined silk, which shrinks when wet and becomes a malleable fabric to the wearer’s body to become an even more personalized item. “I’ve been thinking about diversity in terms of material choices,” Minami concluded. “I think the more we diversify, the better it is for sustainability.” 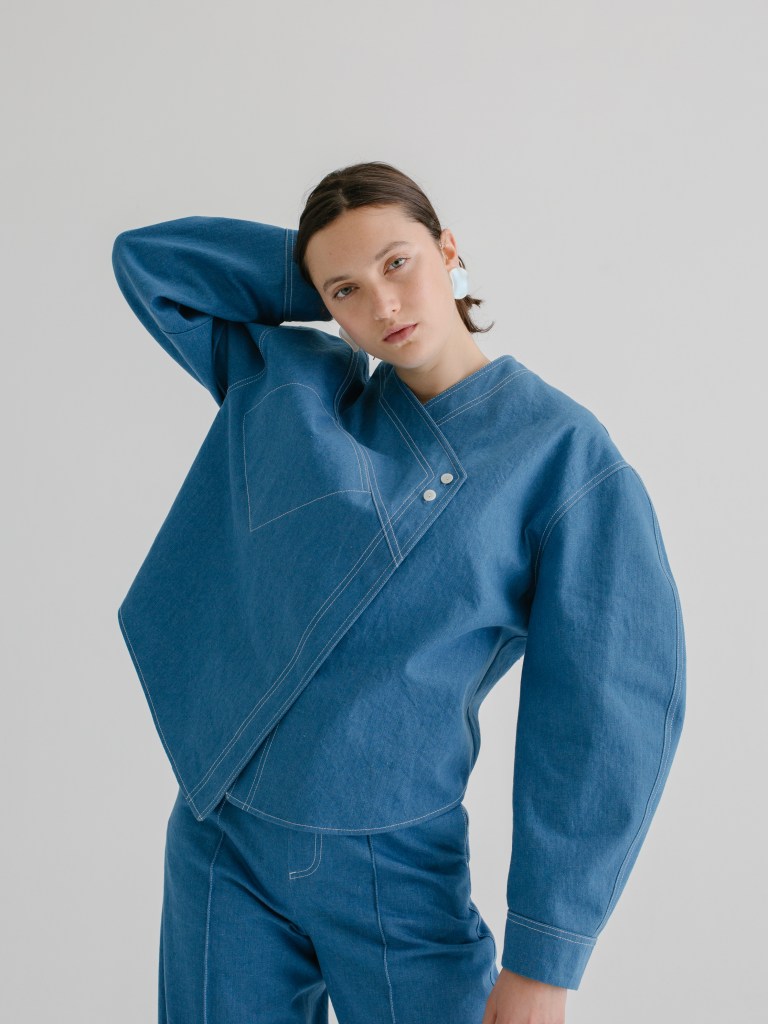 As the industry shifts its attention to quiet fashion, it’s become increasingly important to offer consumers more than basic wardrobe items. Designer Sue Jung is a trained men’s wear designer who plays on gender codes in her minimalist-meets-maximalist label Common Odds, which she launched last year.

Seeing a gap in the market for slightly sculptural men’s wear-inspired women’s wear with artistic undertones, Jung is banking on creative types who can appreciate the brand’s subtle quirks and attention to detail.

The name Common Odds is a play on contrasts — steeped in everyday pieces with little twists, feminized men’s wear items, and overall clean take on experimentation. Nothing is specifically feminine, which opens the door to eventually launching men’s wear, which Jung sees as the only reason she would hold a fashion week presentation in today’s saturated market — to draw in as many interested eyes as possible.

Before Common Odds, Jung studied fashion in South Korea and graphic design at Parsons, leading to a 10-year career as a men’s wear designer for Ralph Lauren, DKNY and G-III. And, with a passion for photography, she’s garnered a personal Instagram following of 138,000.

Her strength lies in outerwear, and some of the strongest points in her spring collection, her third, include a rounded denim jacket, oversize trenchcoat and mannish suiting in a muted pastel palette. Her signature silhouette to date has been the sculptural sleeves adorning sleek shirting and lightweight jackets comparable to Lemaire.

She likens her aesthetic as a maximalist approach to minimalism. What it’s translated to is amped up playfulness and shapes on easy silhouettes. She draws inspiration from artists such as Constantin Brâncuși and Helen Frankenthaler through subtle nods to the shapes of Brâncuși’s sculptures or color scheme of Frankenthaler’s paintings.

As a socially conscious consumer and vegetarian, Jung is also a proud purveyor of vegan leather. Hers may be some of the chicest options in the market, including a trucker jacket and white slightly curved trousers cut in Italian vegan leather, and a fitted leather blazer in a Japanese one.

There are some literal twists to her garments, too, either decorative or with the ability to transform a look. Pleats coming back-to-front maintain the curved thread Jung has established throughout her three seasons, while the French seams outside a blue pleated shirt create a sophisticated look in front with interesting fabric separation in the back.

For a designer who likes to experiment with shape, there’s a realness to the clothes that feels both special and everyday. Shirting is a sweet spot in the range that works for all seasons, while sheer items like a trucker-style button down is less intimidating than it sounds. For work or play, men or women, Common Odds is a promising contender in the realm of quiet, considerate design. 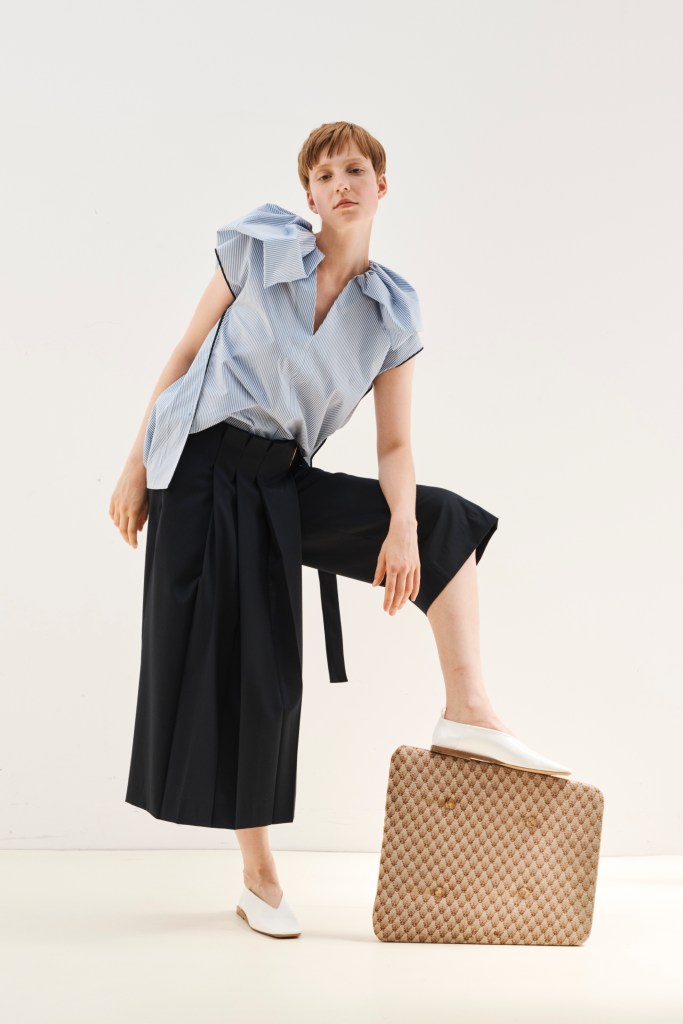 With more than 10 years of experience working at other brands, creative director Ashlyn Park decided to launch her namesake luxury women’s wear label in 2018 on the tenets of quiet yet empowering design.

Park has been a behind-the-scenes designer throughout her career, holding full-time positions at Yohji Yamamoto, Alexander Wang and Calvin Klein under Raf Simons, with further freelance stints at Proenza Schouler, Thakoon and, most recently, Khaite.

Much like these brands, Ashlyn New York takes a modern approach to what Park describes as a feminine and playful line. Upon first glance at her spring 2020 range, clear standouts with a cool bent are the reworked shirting that play to the sophisticated side of experimentation. Now in her third season, she has established the line as a calling card for modern-luxe tailoring.

While studying at Bunka Fashion College in Japan, Park won the Soen Prize, which allowed her to work at Yohji Yamamoto, where she remained for three years. There, she developed a conceptual way of thinking and the framework for her current aesthetic.

Her design strategy errs on comfort and space between the garment and body, allowing for easy movement and bodily expression. Foremost examples here include a sleeveless white gown with fluid cascading back, and a blouse with a similar waterfall drape.

Park has a clear affinity for polish, even when melding clean silhouettes with cheeky 3-D elements. Inspired by the strength of her own hands — with which she’s able to learn new skills, make mistakes and create new designs — she incorporated subtle tributes to her hands through the chic shape of cap sleeves mirroring the hand motion for “OK” on a pleated poplin dress. Other whimsical touch points include shirting with folded back, puff shoulders or butterfly draped puff collar. A balance of playfulness and formality could also be seen in pant-skirt hybrids and a black tailored jacket with dropped wide shoulders and nipped waist.

“I’m most excited about the freedom of design,” Park said during a preview, adding: “Working for other brands it was really hard to express my designs. Here I can do whatever I want.”

Moving forward, Park plans on expanding her novelty shirting range and focusing on sales as a new exhibitor at the upcoming Woman trade show in New York. “Since I’m a fresh, emerging brand, at this time I have been focusing on my consumers’ custom orders through my web site and distributions. I want to focus on establishing and expanding my brand.” 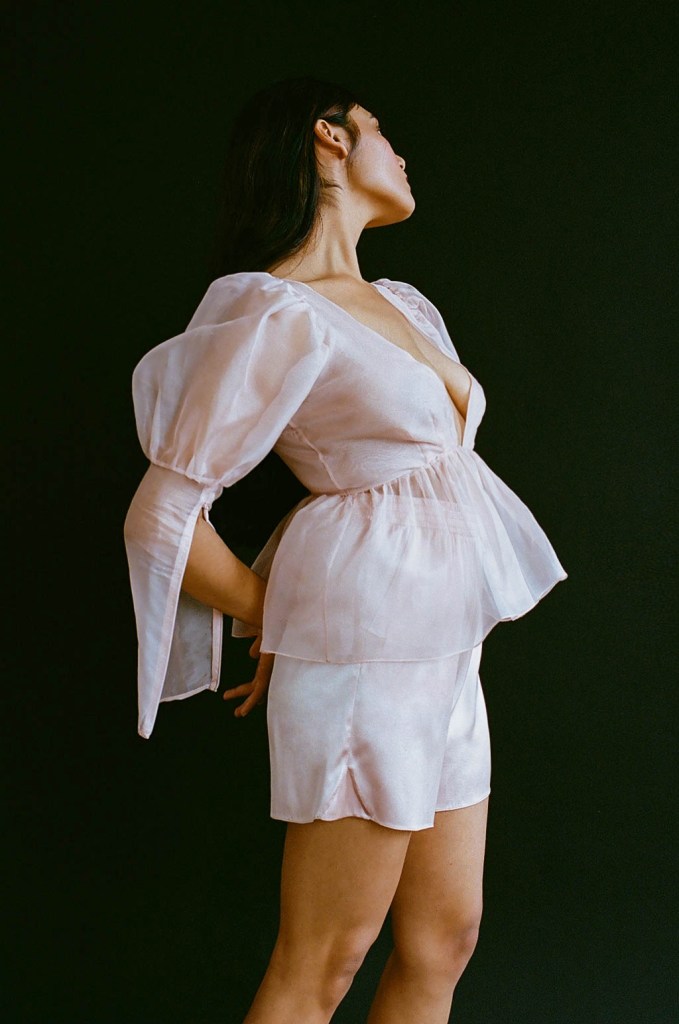 For Allina Liu, a reset to her namesake line — launched in 2015 — away from a traditional wholesale model is proving beneficial.

After taking a brief hiatus last year to work at more commercial brands such as J. Crew and Rebecca Taylor, Liu has decided to relaunch her modern contemporary label this summer in a direct-to-consumer model that has already sold out of certain styles.

She’s taking a balanced approach to design — coupling her eccentric inclinations with a factor of wearable ease. How does someone who is inspired by the sexualized works of Nobuyoshi Araki and Ren Hang create pieces meant for everyday? The answer, it seems, is simplifying. It’s a paradox she’s grappling with: to be unique and simultaneously wearable and approachable at once.

Upon graduation from the Maryland Institute College of Art, Liu cut her teeth at The Row and Thakoon. She initially launched her brand on the codes of innocence, romance and sexuality. Early items featured bondage straps, hidden zippers that played on the idea of restriction versus release, and hook-and-eye closures nodding to suspension. She garnered moderate press when Cardi B donned a sheer tulle duster for The Fader back in 2017.

But the eccentric clothes weren’t selling, and relying on traditional press and wholesale accounts wasn’t working. Her strategy now is to take the core elements of her early collections into pieces that could live in the real world, directly to the customers.

Her new Rhea babydoll dress, for instance, is the perfect balance of ease, flirt and sensuality, cut with a lace-up back, waist peplum and deep V-neck so that it doesn’t feel too precious. It’s the type of piece that can easily be dressed up for a cocktail or back down with jeans.

In an era heavily influenced by social media, Liu is finding valuable press and marketing through the newly minted editor-influencer roles as opposed to traditional editorial placements. As a co-sponsor to her p.r. agency’s summer press trip, she offered guests the Rhea dress in two colors which, in turn, helped sell out of the black style. It helps, too, that the dress is cut oversize yet feminine.

The goal for Liu moving forward is sticking to a direct-to-consumer model, dropping small capsules every other month of what she wants to build as core styles, and making sure to create a lasting identity. “At this point I’m only doing pieces I really believe in,” she concluded. “Keeping it clean, having interesting silhouettes and small design details and made in New York is really important to me in terms of sustainability and being able to monitor factory conditions.”