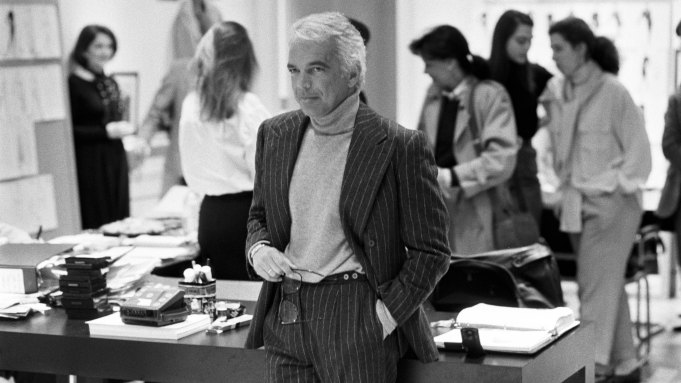 Ralph Lauren Corp.’s decision to vacate 12 floors at 550 Seventh Avenue in New York could signal the end of the reign of the 24-story Art Deco building as the city’s premiere fashion destination.

Chauffeur-driven limousines frequently pulled up to the building, dropping off first ladies such as Laura Bush and Hillary Clinton (with daughter Chelsea Clinton in tow), and countless celebrities and models had private appointments for fittings with the designers. Barbra Streisand, Liza Minnelli, Bernadette Peters, Jack Nicholson, Warren Beatty, Annette Bening and Demi Moore were among those spotted in the building, often visiting Karan, who was driven each day to the Seventh Avenue building, between 39th and 40th streets, by her chauffeur Marvin Morris.

“It felt like home to fashion. Oscar, Bill, Ralph and me,” said Karan on Tuesday. She said 550 Seventh Avenue was where the Donna Karan brand was born “and was my home away from home, truly perhaps more there than home, seven days a week.”

According to a Lauren spokeswoman, Ralph Lauren intends to move completely out of the building over the next several months. The lease expires on Dec. 31, 2019. The divisions that are located there are Chaps Women’s, Lauren, Lauren Dresses, North American Wholesale, and Women’s Collection. Lauren, Chaps, and Lauren Dresses sample making/production are based there and will also move out. Some of the divisions are moving to 601 West 26th Street, a few to 650 Madison Avenue and some to a new Nutley, N.J., location.

As reported, Lauren has leased an additional 350,000 square feet at the Starrett-Lehigh building at 601 West 26th Street, where the company already occupies 132,700 square feet since relocating its North American business operations there last year. Club Monaco has offices there as well. Lauren’s corporate headquarters will remain at 650 Madison Avenue. The additional square footage at Starrett-Lehigh will allow the company to consolidate employees scattered across locations at 625 Madison Avenue, 550 Seventh Avenue and several other midtown buildings by moving them to the new space on the far West Side. Functions moving to Starrett-Lehigh will include marketing, digital and innovation. Phased relocation beginning in 2019 will be completed by year’s end.

Today, there are still a handful of fashion companies remaining at 550 Seventh Avenue such as Jill Stuart, Lilly Pulitzer, Mavi Jeans, Ben Elias Industries, Badgley Mischka and Morgan Lane. But many of the others have moved on.

But as fashion companies have pulled up stakes at 550 Seventh Avenue, companies from other industries have since moved in such as TheaterMania and Ovationtix. Simpson, Gumpertz & Heger, an engineering firm, moved to the building in 2013, and was the first non-fashion-related firm to move into that building. In 2017, Shanghai Shenda took up residence there.

Kristin Fisher, president of The Adler Group, whose family has owned 550 Seventh Avenue since Louis Adler built it in 1925, said they are looking for creative businesses, such as fashion, media and technology, to move in. When asked if she still wants 550 to be a fashion destination, Fisher replied, “Of course. The building has a rich history in fashion and we always look to honor that.”

According to Fisher, the building has made several major design improvements, including a renovated lobby, storefront and facade and new windows. The building, which is planning future tenant amenity space, is fully wired. Fisher declined to divulge what the going rate is for square footage, but said, “We have seen a mixture of fashion and creative tenants and feel that our pricing is in line with competitive buildings.”

Ellin Saltzman, who served as senior vice president, fashion director for such retailers as Saks Fifth Avenue, Bergdorf Goodman and Macy’s, was a frequent visitor to 550. “That’s the end of an era for sure — Blass, Oscar and Donna’s homes. The doormen knew us. We’d walk through the building to the cafe. The elevator men were special.

“You always ran into someone you knew in the building, coming or going. It was the most prestigious fashion building on Seventh Avenue or on Broadway. The limos in front of the building heralded it,” said Saltzman.

Stuart Kreisler, a former owner and former president of Ralph Lauren Womenswear, recalled the early days when Lauren first came to 550. Kreisler explained that he initially brought Lauren to the building in 1973–1974 when the Kreisler Group (which moved into 550 Seventh Avenue in 1970–1971) acquired Lauren’s women’s business. The designer wasn’t that eager to move his women’s business from 40 West 55th Street, but Kreisler convinced him.

“550 was Norman Norell, Bill Blass, Oscar de la Renta, Pauline Trigère, Donald Brooks, Teal Traina. Everybody who was of substance was in that building. 550 was the couture building. It was like being on St. Honore,” recalled Kreisler. (Ralph Lauren Corp. eventually bought Ralph Lauren Womenswear from Bidermann Industries in 1995.)

“There was an elevator starter who greeted everyone who came into that building,” recalled Kreisler. “If you were really important, he’d send up the elevator with no one else in it.”

Growing up as a kid in Brooklyn, with the goal of going into business for himself, Kreisler said, “Being at 550 really meant that I arrived. I remember having Clovis Ruffin in that building [as part of the Kreisler Group] and they wouldn’t let him up the front elevator because he didn’t have a jacket. He had to go up the freight elevator.”

Stephen Ruzow, former president and chief operating officer of Donna Karan International, recalled that when he started working at Karan in 1989, they had one floor (the 14th) at 550. Eventually Karan took seven floors there for Women’s Collection, beauty and men’s wear (and the whole building at 240 West 40th Street for DKNY.).

“It was a great building,” said Ruzow. “Oscar was there, Carolyne Roehm was there, Bill Blass was in the building.” He said Karan bought out Trigère’s lease. “And I think that was the year she [Trigère] made the most money ever. We paid her about a quarter of a million dollars to buy out her lease, and she was thrilled,” said Ruzow.

“It was the designer building,” added Ruzow, recalling celebrities such as Streisand who would frequently visit. “The whole area has changed now.”

Patti Cohen, Karan’s longtime chief of marketing and public relations, recalled, “There are so many memories there. We used to run in between floors and borrow fabric from different people. It was like one big design room. It was such a different time. It was like family.” She said for a designer like Karan, “To be at 550, you made it when you were there.”

In 2016, when Karan vacated its roughly 50,000 square feet space on the 14th to 17th floors, it signaled a change in the real estate world. At the time, it was reported that the landlord was seeking to attract creative tenants from different industries for the space. They noticed that fashion tenants were moving all over the city and it was no longer necessary to be housed in one location. Asking rents for the Donna Karan space at the time were $60 per square foot.

“It was a small building and they kept it to the name designers. They didn’t mix it like 530 and 512,” he said. “Designers were very friendly in those days. It wasn’t that competitive, and they started the CFDA and they would have meetings in the various showrooms,” said Shaw.

In 2011, when de la Renta decided to move from 550 to a new location on West 42nd Street, the designer told WWD, “I love it here, but I also love the idea of moving. I think fashion is a revolving door, and to be alive you have to keep that revolving door moving. This is literally the only place I’ve worked since 1965. It’s been a very long time, but this is sort of like getting fresh air now.”

Geoffrey Beene, Blass and Trigère were already ensconced in 550 when de la Renta started working there. “Every one of the so-called big names were here. It is obviously very different times now. But Donna [Karan] is still here, and Ralph Lauren,” he said at the time. “I would have loved to have stayed here, but we couldn’t get a floor above us or below us.”

As for de la Renta’s take on how pivotal his departure would be to the already fracturing neighborhood, he said in 2011: “As fashion has become a global business and businesses have expanded, people are operating in different areas and different parts of the city. The nucleus of the Garment Center already broke up a long time ago. Whether we have designers still on Seventh Avenue or somewhere else, we are all New York designers, and that’s what matters.”

Bobbi Queen, a former senior fashion editor at WWD, recalled the ease in covering all those designers in one building. “All those houses in one place certainly made covering the designers more convenient. It also made that element of the industry more like a ‘family.'”

Today there are about 1,600 garment manufacturing firms citywide, and about 25 percent of these businesses, or about 400 firms, are in the Garment Center. These companies face enormous global competition and real estate pressures despite preservation attempts. In addition, the Garment Center faces development from office space conversions. A steady flow of apparel brands has looked to or has left Manhattan for less expensive rents in other boroughs.

As reported in October, in a move to save Manhattan’s Garment Center, New York City Economic Development Corp. released a Request for Expressions of Interest, or RFEI, seeking to identify respondents interested in acquiring and operating property in or around the Garment Center that will provide dedicated space for fashion manufacturers. New York has committed up to $20 million in city funding toward a portion of the acquisition costs.