The 6267 design team of Tommaso Aquilano and Roberto Rimondi looked a bit tired during a whirlwind visit here. Who could blame them? 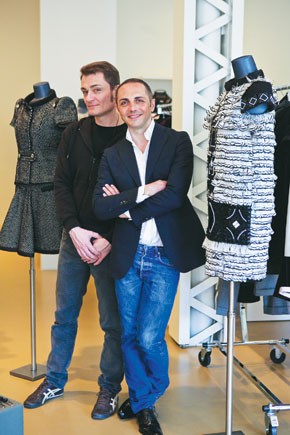 CHICAGO — The 6267 design team of Tommaso Aquilano and Roberto Rimondi looked a bit tired during a whirlwind visit here. Who could blame them?

In the last month, the Italian designers were named creative directors at Gianfranco Ferré SpA before traveling across the U.S. to speak with retailers about 6267 and appear at trunk shows for the label in San Diego, Santa Monica and Orange County in California, as well as Dallas, Chicago and New York.

Not that Aquilano and Rimondi were complaining during an interview mostly translated by Angela Picozzi, 6267’s chief economic officer. In fact, what’s not lost in translation is the pair’s humility and humor.

After working at MaxMara, where they met, they have learned to let their clothing do the talking. And those clothes speak fluently, said the owners of Chicago’s Blake boutique, Marilyn Blaszka and Dominic Marcheschi, who were hosts for the store’s first trunk show, featuring 6267, this month.

In fact, when the retailers first encountered the 6267 line they met only with Picozzi, who did not reveal the designers’ identities.

“Angela wouldn’t tell us who the designer was,” Marcheschi recalled. “But the line was good and we knew it was going to go somewhere.” Besides, “They served us the best Parmesan cheese,” he quipped.

“It was a test in the beginning,” Picozzi said. “It was good that they just appreciated the clothes, not the designer.”

But now the word’s out, and 6267, which launched in 2005, is available in some 50 U.S. doors with its most significant accounts at Really Great Things and Bergdorf Goodman in New York, Blake in Chicago and Savannah in Santa Monica.

“We are just growing up,” Rimondi said, adding that the line looks to evolve and surprise while maintaining its fit and quality.

“When a customer comes to us again, she has to say ‘Wow,'” he said. “We want to change the style but maintain the same fit…like Madonna, she changes all the time but is always beautiful. Right now we are ‘Like a Virgin.'”

This story first appeared in the May 20, 2008 issue of WWD. Subscribe Today.

Blaszka already has seen the line progress. “They delivered good clothes first before they delivered fashion,” she said.

“They have a respect, from something historically Italian, that’s hard to come by today,” she said. Marcheschi added, “It is beautifully constructed, and that today is a rarity.”

In Chicago, clients looked inside the coats, focusing on the fabric, fit and hand-crafted details. Those included hand-sewn buttons and buttonholes, along with thin strips of black velvet hand-sewn next to the front pockets of a $1,500 black-and-white wool bouclé jacket. The bestseller was a $4,450 black angora wool coat with balloon sleeves, rolled collar and reversible belt.

“They were really noticing all the details…that, for us, was very important because then we knew we going in the right direction,” Picozzi said, adding that in Italy shoppers may focus more on the name than the craftsmanship.

Sales for the line hit $6 million in 2007, with basic skirts and pants starting at $400 and $450, respectively; a small collection of ballet flats, pumps and boots running $360 to $740, and special items such as a tunic embellished with rows of black and white feathers, each one hand-sewn on the dress, retailing for $9,000.

The fact that Blake, whose owners keep a low profile, do not use e-mail or post a sign outside their store, would host a trunk show for 6267 seemed only natural given the subtleties of the brand, with most coats and jackets bearing the 6267 label in the garment’s inner cell phone pocket rather than on the collar.

The line’s number is the one Rimondi was assigned at summer camp.

“It’s more modern than just a name,” Aquilano said. “You can say it in every language.”