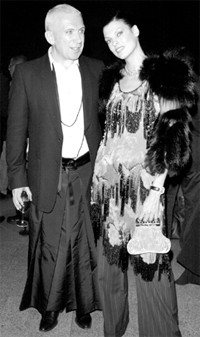 NEW YORK — Has the notion of men in skirts lost its shock value?

When Boy George arrived for the opening of the Metropolitan Museum of Art’s Costume Institute’s latest exhibit, “Bravehearts: Men in Skirts,” on Monday in the guise of London pop icon Leigh Bowery — wearing a glittering cape and disco ball helmet that virtually shut out his eyesight — he nearly went unrecognized, and worse, risked being mistaken for the average fashion victim.

In the era of metrosexuality — when the public discourse on gender roles is dominated by Kyan, Carson and Jai from “Queer Eye for the Straight Guy” — even a stodgy institution like the Met can open an exhibit on the subject of “Men in Skirts” without creating much shock. But as for value, the timing of the exhibition that examines the multitude of signifiers encoded in the act of a man wearing a skirt, happens to come at an opportune moment for another reason: It follows a season of women’s runway shows that put forth a distinctly pretty image for the fairer sex, and some critics have charged that designers have done so in a one-dimensional manner so ladylike that it threatens to undermine the cause of feminists.

While women may feel that fashion’s direction could be perceived as more limiting, men are finding new options of presenting themselves in varying degrees of masculinity. Wearing skirts might have the stereotype of being the most extreme, but as Andrew Bolton, associate curator of the Costume Institute, examines the garment as worn by men throughout history, his exhibit makes a case that wearing a skirt can actually be a sign of heightened manhood — “the idea of the male peacock,” he said.

“The reason men don’t wear skirts is the reason they should,” Bolton said.

Displaying the leg can be symbolic of male prowess, for instance, and any form of skirt was bound to draw attention to the men who wear them: Jean Paul Gaultier, who sponsored the exhibit and attended the opening, inspired countless guests to don his 1985 invention of pants with one leg that wraps around the front to form an apron skirt, while Miguel Adrover arrived in a floor-grazing kameez.

Conversely, Cynthia Rowley wore men’s trousers and a purse with a striped tie as a strap, reflecting Bolton’s opening montage of men wearing skirts and women in trousers from various decades, such as a Seventies Bill Blass pantsuit that narrowed and elongated the female form paired with Ozwald Boateng’s Savile Row skirtsuit that highlighted the muscularity and verticality of the male form.

From kilts to pareos, indigenous straw skirts to countercultural punk trends, the exhibit carries on through several themes of punk, grunge and hip-hop adaptations of skirts (think baggy jeans).

“I’m over there in the traditional section,” said Adrover, who has two pieces included in the show — long shirts worn over basketball shorts and a tailored blazer, evoking the idea of a diplomatic merging of Eastern and Western cultures.

Anna Sui’s baby-doll dresses that were popularized by the Seattle rock movement are also included.

“It was instinctive to design that,” she said. “This is legendary. I would do it again if I feel it’s right for men.”