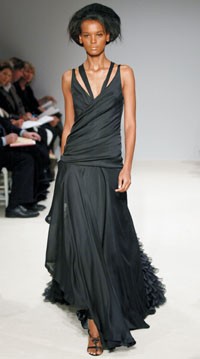 Givenchy: During his tenure at the house, the founder’s elegant approach proved elusive, and Macdonald never quite found his groove. Even his last couture collection there (his contract is up in April) proved no exception.

Grown-up good-girl clothes — curvy lace suits, a swirling pleated cocktail dress trimmed with velvet ribbon — brought to mind the days of “Belle de Jour,” when a married woman might dress up to step out on her man. The best of these included a white jacket and matching skirt both edged in openwork lace and a glamorous gown in elegant black. Too often, however, Macdonald’s creations looked awkward or simply old fashioned and came tangled in beaded cobwebs, dragging ruffled tendrils or sprouting tufts of tulle from behind. What a way to bid adieu.