NEW YORK — Like a sprinkling of fairy dust, glitter and glitz will lend a dose of sparkle to fall.

Metallicized fabrics — a hit since... 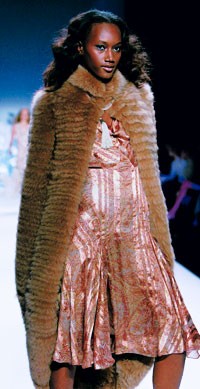 NEW YORK — Like a sprinkling of fairy dust, glitter and glitz will lend a dose of sparkle to fall.

Metallicized fabrics — a hit since last fall when they appeared on such runways as Donna Karan and Prada — set last week’s runways aglow. And judging from the selection at last month’s European Preview — a hint of what’s to come at next month’s Première Vision fabric fair in Paris — metallics will continue to shine their way through to spring ’06, and, many say, beyond.

“Evening looks are fast becoming more accepted for day, and metallics are a perfect example of this,” said François Damide, president of the U.S. division of French mill Bucol, the land of plenty when it comes to metallics, with a variety of jacquards and brocades as well as more subtle silks and silk blends. “When Miuccia Prada used our metallic jacquard poche for her spring 2002 collection, I think it really brought those looks to another level.”

The fabrics, which were stored in Bucol’s archives, were quite traditional in feel, added Damide — “until Miuccia and her team recolored them to include more tarnished metallics.”

That’s exactly what some retailers are saying will make metallics a hit come fall. “The most notable difference I’m seeing for fall is that the metallics are more burnished in color and not as shiny,” said Robert Burke, vice president and senior fashion director at Bergdorf Goodman. “I like them best when they’re mixed with traditional fabrics like tweeds and velvets.”

And the trend, he added, is fast becoming a classic look. “Metallics act like neutrals,” said Burke. “They go with everything and are easy to wear.” Among his picks for fall were several selections at Proenza Schouler.

Julie Gilhart, fashion director at Barneys New York, has found that anything gold or silver has been selling quite well. “Things that are reflective, that shimmer and shine, are really attractive to the eye, and we’ve gotten a great response from our customers. I think that will continue going forward,” she said. A fan of metallic looks herself, Gilhart said the fabrics offer a “good base. Anything works off of gold or silver, it really serves to balance things.” Highlights from the runways, she added, included a silver dress and drop-waist skirt at Behnaz Sarafpour and metallic print silk dresses at Zac Posen.

“We’re still feeling very strongly about metallics,” offered Scott Tepper, fashion director at Henri Bendel. “The uses of metallics I [saw] on the [fall] runway are really a natural progression from the ones that were on the runway for spring. The designers really found a way to make these fabrics work for fall.”

Tepper liked the bold looks at Oscar de la Renta, Matthew Williamson and Anna Sui, as well as the more subtle touches on men’s wear fabrics on various runways. “Using metallic on heavier fabrics really tones down the look, which is also important,” he added.

For Joan Kaner, senior vice president and fashion director at Neiman Marcus, metallics “add a luster to everything. They’re very appealing to our customers, who continue to respond to them. They love shine.” Kaner said she loves metallics mixed into tweeds for day, and sees metallicized fabrics as the perfect look for night. “Everyone loves something special, and these fabrics make for very special clothing,” she said, adding that tweeds shot with copper at Nanette Lepore were a highlight.