A Bushel for the Big Apple 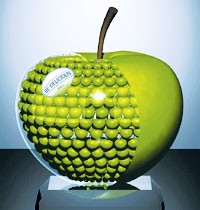 Their customized acrylic apples will be displayed on sidewalks from August through October. A handful of artists, including Cindy Sherman, a favorite of the fashion world, are doing the handiwork for a few of the 190 sponsors.

The public art show is derivative of the 2000 Cow Parade, and the apples will be auctioned at Sotheby’s in November to benefit City Harvest, the Police Athletic League and the New York & Co. Foundation. “We want to show New York is alive and kicking,’’ said Irene Narissi, Big Apple Fest’s director of sponsor marketing. “The streets are going to be shining with great pieces of art.”

A runway fashion show will be the focus of Miller’s apple. “I figured I had to do something big in the Big Apple,” said Miller, a Big Apple Fest committee member. “We all live here and love it, so we thought this was something we wanted to do.”

But don’t expect to see any illustrations of styles the designer will show during Fashion Week in September. “It’s pretty generic,’’ she said. “There’s a model walking through and many chairs.”

Diane von Furstenberg is more forthcoming with her latest creations. Pedestrians will get a sneak peek of some of the designs to be featured in the Diane von Furstenberg for H. Stern jewelry collection. After working with H. Stern on her bold gold jewelry, the designer created a love knot pattern, four intertwined gold hearts, based on some of the gold chains she had designed.

Graffiti artist Scott Chester of Acid New York will use the pattern to give the H. Stern apple “an urban, modern twist,” said Andrea Hansen, marketing director for H. Stern. The finished product will be displayed “smack in the middle of Rockefeller Center,” a space Hansen secured months ago as soon as she heard about the project.

While most of the 190 participants selected three possible street locations to display their work, Lord & Taylor is taking the apple inside, and will showcase the piece in its Fifth Avenue flagship.

Ecko, knowing that thousands of commuters and people attending the Republican National Convention will be pouring into and out of Madison Square Garden, snagged a space near the entrance. The company is still deciding which design to use for its apple.

“We’re a brand born in the streets of New York,’’ said Clint Cantwell, director of corporate communications, explaining why Ecko got involved. “We have new headquarters on 23rd Street and will have a new store on 42nd Street…This is a great opportunity.”

Lancôme, DKNY Cosmetics, Avon Products and DiModolo are also pitching in. DKNY will tout its new fragrance, Be Delicious. About 50 more sponsors are expected to sign up before the opening night party Aug. 10 at Gotham Hall. ?