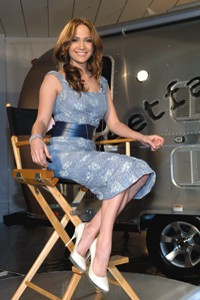 Los Angeles — Fans of iconic entertainment properties such as “Star Wars” and “Spider-Man” would shudder to think of Jennifer Lopez as a brand on the same scale. Still, celebrity licenses have been growing steadily — and with a combination of credibility and longevity, such merchandise could be well on its way to grossing as many dollars as beloved comic book heroes, movies or rock bands. As a result, companies luring entertainers to launch clothing, accessories, fragrances and other merchandise are paying higher premiums for stars’ names and images.

“Royalty rates for celebrities have just about doubled over the last couple of years, due to higher demand [from consumers],” said Charles M. Riotto, president of the International Licensing Industry Merchandisers’ Association in New York. “While we were seeing rates of 3 percent to 7 percent five years ago, they currently range from 6 percent to 10 percent. Celebrities are being seen more in the light of entertainers and entertainment properties.”

“Mega licenses like ‘Star Wars’ are still grossing more than any celebrity I know of, but that’s just the top tier of properties. Once you get past that, there is a lot of parity,” said Riotto.

And, despite the spike in licensing fees, the range of celebrity-inspired products is expanding. Madonna collaborated with Celebrity Cellars to launch commemorative bottles of wine promoting her latest album, “Confessions on a Dance Floor,” and the supporting world tour that kicked off May 21. That same month, Beyoncé and Tina Knowles announced the launch of Deréon, a junior spin-off of their contemporary label, House of Deréon. Licensed merchandise from legendary bands such as KISS and The Beatles also has hit the market, encompassing everything from a video slot machine adorned with the glam-metal faces of KISS members to tableware, bedding and other items featuring John Lennon’s pen and ink drawings.

Although the success of licensed merchandise partly hinges on the public’s continued fascination with an individual in the limelight, a lot also depends on good business sense.

Whether Lopez has a movie, an album or an overexposed love life, her companies continue to prosper. Her list of licensed products — from fragrances and watches to outerwear and lingerie — with companies such as Coty, E. Gluck Corp., August Accessories and Warnaco Inc. are said to be performing well.

“The lines are able to reflect Jennifer’s lifestyle,” said Gina Rizzo, fashion director for Lopez’s Sweetface and JLo by Jennifer Lopez lines. “The ultimate goal is to cater to the public’s desire for a fashion line that is innovative and fashion-forward.”

With the current glut of celebrity lines and the higher stakes of licensing deals, all the parties involved have to be increasingly focused on releasing a quality product that is authentic to the personality behind it.

“There is an art to managing a good licensing program. You can’t just slap a name on something and sit back and wait to be paid,” said Riotto. “If you have too much out there, the market gets saturated and a brand gets diluted.”

Riotto advises celebrities to keep tight control of the product categories and to not keep any one thing on the market too long. “The key is to pull back and refresh the design and go back,” he said.

Keeping the mix fresh is key for Beverly Hills, Calif.-based Signatures Network, which was among the first companies to manufacture concert T-shirts. Now it owns the licenses for Madonna, KISS, U2 and The Beatles, among others, and the range of merchandise includes fragrances, art prints and even wines.

“We are selling a celebrity’s credibility and sense of style,” explained chief executive officer Dell Furano. “Celebrity licensing and commercial endorsements have to be a good marriage or things get bad for everyone involved.”

As with a bad marriage, a bad licensing partnership can end up in court. Tarrant Apparel Group filed a $100 million lawsuit against Jessica Simpson for breach of contract in April. Simpson stands accused of failing to support or be photographed in the JS by Jessica Simpson and Princy denim and top lines that were licensed to Tarrant. Los Angeles-based Tarrant also parted ways with the Knowles’ House of Deréon label. The Knowles have since signed with New York’s Check Group LLC. Tarrant would only say that the company is “no longer in the celebrity jeans business.”

Riotto notes that sometimes bad partnerships occur, and when they do, it’s always best to get out. “It happens, and the smart thing to do is pull back and try something else out.”

Andy Hilfiger, partner and co-founder in Lopez’s Sweetface Fashion Co., said Lopez’s brands’ staying power is based on her knack for incorporating her own wares into her red-carpet style. “Jennifer is a style icon who wears a lot of different things,” he said. “She’ll mix and match, pairing a high-end designer with her own accessories.”

Gwen Stefani, who entered the fashion arena last year with creations for LeSportsac and L.A.M.B., has continued to inspire her fans with Harajuku Lovers, a Japanese pop culture-influenced line, which is produced under license by Jerry Leigh Entertainment Apparel. Stefani’s active participation in the day-to-day development of the T-shirts, underwear, clothing for children and infants, bags, belts and other accessories has been a passion.

“I love the design process,” said the new mom, in her first interview since giving birth to a son on May 26. “I wouldn’t want to put something out that didn’t come directly from me or I would never be happy with it.”

Credibility seems to be the catchword of the moment in celebrity licensed apparel, and it’s something that older brands, or “dead celebrity” brands, as they are known in the industry, seem to have already proven they possess.

Classic rock- and vintage movie-inspired merchandise, such as T-shirts emblazoned with photographic images and famous graphic logos, is seen as a no-brainer in the licensing world. “I keep the artists pure; there is no need to reinvent it or adorn it,” said Jeff Jampol, manager of The Doors brand. What Jampol has done is update the materials and the designs of Doors merchandise and bring in new, hip companies such as Trunk Ltd. and Junk Food.

“There’s a built-in, authentic cool factor that has enabled sales of The Doors brand to undergo 400 percent growth in the last two years,” said Jampol. “The gravitas of a band that’s established is very difficult to obtain, or nigh well impossible now. These days, pop culture suppresses time, and the attention span of the public has been diverted and sliced up and is very difficult to penetrate now.”

He noted that record labels now see tours and promotional merchandise as part of the business plan and crank it out as quickly as possible. “But what do these pop idols stand for? Will their music be around in 40 years?”

For now, it looks as though most celebs are looking for short-term payback instead of a long-term plan. Said Riotto: “Until these newer celebrities can prove their longevity, their licensing programs will be geared toward selling a bigger amount of merchandise in a shorter amount of time.”