In the city that never sleeps, designers celebrate the uptown girl and urbane woman with everything from sharply tailored pants to glittering gowns to plaid fur coats. 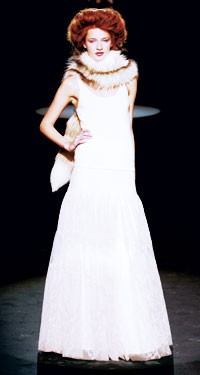 Carmen Marc Valvo: Carmen Marc Valvo began with one of his show’s strongest looks: a mink capelet over a long, lean-jacketed pantsuit in brown pinstriped cashmere. It was smart, chic, even sexy, but it was a maverick in the collection. Because Valvo is, after all, the man you go to for evening dresses, especially those floaty numbers on which he built his reputation and his business. And while there were lots of them, too many were a little deja vu. Among the few that could add some excitement to a Valvo fan’s wardrobe were the long burnt ombréd silk mouseline dress, a pale rose lace look and the black ruffled beauty.

There’s no question that furs are one of the important trends of the season, and Valvo offered his ladies some stunning fur coats, such as the lean beauty in brown broadtail, reversing to cashmere and a pink Swakara version. But perhaps he embraced the trend with too much gusto, since he piled fur pieces on just about every look — rather than enhancing his clothes, they often detracted from them. Over the years, the designer has demonstrated the talent to do it all, and while this collection had plenty to offer, it lacked Valvo’s usual focus.

Cynthia Rowley: Motherhood suits Cynthia Rowley. Just weeks after giving birth to her second daughter, Gigi Clementine, the designer sent out a more mellow, more sophisticated collection. The opener, a flowing rust jersey gown with a plunging neckline, made a fabulous, chic understatement. She carried that through the rest of her dresses in beautiful, airy chiffons, paired with a long, sporty coat or a chunky cardigan. Still, as her show notes indicated, fall was based on luxury camping looks. And, at times, Rowley certainly put the camp in camping, taking the motif a little too literally. Sometimes it was funny — the long-burning matchstick necklace — and sometimes not — nylon rock-climbing ropes lacing up a pullover or the gold appliqué antlers trimming a dress’ neckline. Those kitschy details, however, shouldn’t detract from the overall grown-up attitude of simple, luxe knits and the sophisticated appeal of an unadorned black satin dress. Next time she ought to concentrate on improving her presentation, as the disorganized seat assigning delayed everything by almost an hour. The sooner Rowley gets the runway going, the sooner she’ll be at home toasting marshmallows with her girls.

Phi: Now in its third season, Phi is starting to throw off the veil of being merely a vanity project and feel like a familiar fashion week stop. And with her months-old SoHo boutique building its client base and the spring collection on the floors of Neiman Marcus, Colette and Barneys New York, Susan Dell is quickly gaining ground.

In his second collection for the label, design director Andreas Melbostad proved he is developing his own rhythm. Done completely in black and white, his fall effort kept to the rigorous chromatic discipline he displayed for spring. The overall effect of buckled leather straps, studded silks and mannish trousers was an aggressive one. However, taken separately, these were clothes that are well-suited to the urban woman and her shopping habits. Why cut a jacket in bright colors when everyone wants to buy it in black? And for the most part, Melbostad uses a controlled hand with details and silhouette tweaks that are perfect for the realistic woman who wants to look chic without soliciting stares.

Jeffrey Chow: While Jeffrey Chow has managed to develop a distinct take on the wardrobe of the classically inclined uptown girl, his love of fashion history occasionally takes him dangerously close to literal interpretations and general dowdiness. For instance, it doesn’t take much of a mental leap to imagine his sharp-collared black brocade coat hanging on the racks of an upscale vintage shop. But when Chow does get his something-old-something-new recipe just right, it’s a happy moment, and his fall collection had several. Among these were a number of slim cocktail dresses as well as a few looks that played with proportion, pairing high-waisted slouchy trousers with fitted, short jackets. He also freshened up a more traditional-looking pale floral silk print by cutting it into a tiered skirt and topping it with a hand-knit sweater. Though it was not quite up to his stellar effort last season, in all, it was a strong collection.

Wunderkind: Wolfgang Joop’s sophomore effort at Bryant park was, well, sophomoric — at least in the word’s etymological sense, both wise and foolish. Not that there weren’t pretty clothes. In fact, Joop showed some of fall’s coolest fur coats. The problem was that he had two very different hypothetical muses — a slick, slightly Space-Age babe and a sweet, latter-day Eliza Doolittle type. Strange bedfellows, no?

The minimalist moment consisted of stark A-line coats with fly-away collars, or satin dresses all pieced together and finished with never-ending rows of piping — the type of stuff best left to other designers. But when Joop went romantic in a chic urchin sort of way, the results were much better. Pegged tweed trousers and full lacy skirts were topped by artfully worked coats, one in strips of hunter-green fur and another that featured blue-and-green dyed pieces of fur sewn together into a plaid pattern. Even a chunky herringbone sweater coat was made cozy when trimmed in chinchilla and sporting oversized buttons. And for a finale, Joop showed a glowing sequined minidress that would have even had Eliza say, “loverly!”