For five years, contemporary has been the adored category in the fashion industry.

Now, better, bridge and updated sportswear is taking its turn in the retail spotlight, on the heels of robust sales at high-end specialty stores such as Neiman... 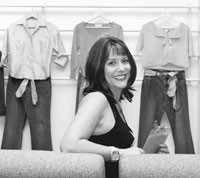 For five years, contemporary has been the adored category in the fashion industry.

Now, better, bridge and updated sportswear is taking its turn in the retail spotlight, on the heels of robust sales at high-end specialty stores such as Neiman Marcus and Nordstrom and upscale boutiques like Frou Frou in Carefree, Ariz., and Duo Moda in Boca Raton, Fla.

Peg Kusner, owner of Frou Frou, said sales at her year-old 1,000-square-foot better and bridge boutique are 48 percent above what she projected, with estimates for 2005 at around $500,000.

“Women come in looking for a few key items that work into their more classic-oriented wardrobes,” she said. “Then they get hooked and get into trying more and more new things.”

Aline Niddam, owner of bridge store Duo Moda, agreed. Her sales are up 35 percent over last year. “People shop here because they find things they can’t find in department stores,” she explained.

The turn of events hasn’t gone unnoticed by the powers that be at WWDMAGIC. This month, organizers will introduce Window, featuring roughly two dozen better, bridge and updated sportswear lines.

“Retailers have indicated that these categories represent a growing area for them, and that having expanded resources at the show would be beneficial to their having an expanded mix in their store,” said Ernae Mothershed, public relations manager for WWDMAGIC.

The 5,000-square-foot Window space, which was uniquely designed to fit the needs of reps with multiple lines, will opt out of the typical squared-off trade show booths. Instead, it will consist of one large area divided into several exhibitor spaces, created from sheer fabrics and clear plastics. Mothershed said booths surrounding the Window exhibition will feature lines with complementary style and price ranges.

“The exhibition is indicative of what’s going on the industry,” Mothershed explained. “I’m happy to see the new environment and to put out a new format for retailers and manufacturers in this area.”

Despite having had its share of better, bridge and updated resources in the past, WWDMAGIC is known more typically for its focus on contemporary resources, in addition to its resort, junior and young contemporary offerings. The emphasis Window places on the higher-end categories represents a shrewd business move, said showroom owners.

“It’s hard to add another show, but I think it’s something WWDMAGIC has to do,” said Jamie Prince, owner of Jamie Prince & Associates showroom, which will appear at Window along with Brad Hughes & Associates, B.K. Hamburg, Karen George & Co. and Rep et Trois, among others. “There’s a lot of struggling going on out there, but the business is solid in upscale stores, which are really going forward with their buys. Because of that, WWDMAGIC needs to be a part of the action.”

Reps added that retailers also need to seek out creativity when placing their buys as customers are shopping this category for particularly distinctive looks and lines, perhaps being choosier due to the higher prices involved.

“They want clothes to be fabulous, not ordinary or something they already have,” said Brad Hughes, of Brad Hughes & Associates in Dallas. “They may not buy as frequently or as many pieces, but when they do, it has to be special.”

Hughes said his bridge and gold-range business is up 25 to 30 percent in two years, and, as a result, he plans on increasing his bridge mix about 25 percent, primarily by looking to Europe for undiscovered resources with a luxurious bent. “In the European market, it’s all about the luxury of fabrics,” he said. “We just signed a [Spanish] line called Simorra, which recently opened a few stores in the U.S. It [has] a look that’s sophisticated but not stale.”

“I sell high-end lines, but my customers are still looking for good prices,” said Kirsch. “So if the prices are high, the styles have to be exceptional.” She estimated her bridge business will see a 10 percent bump from last season.

Karen George of Karen George & Co., a California Market Center showroom with bridge and better lines, said she felt women were seeking classic pieces and a fun piece or two that might not see another year’s wear. “There is a return to classic dressing, where people pay more because they know something will be in their closets forever,” she said. “But at the same time, they’re interested in a trendy top that they don’t want to pay $400 for.”

To that end, she’s carrying lines like Too-She-She, which offers denim with rhinestones and novelty trims, and Lee Anderson, a bridge collection designed by an artist that includes looks like color-blocked raincoats and printed jackets with hand-fired clay buttons. She believes these lines should stimulate seasonal impulse buys — like a lipstick you buy just to perk you up, she explained.

However, most reps agreed that even with novelty, the market has become more accepting of a mature sense of style.

“Even if they are combining things like H&M and Armani, women are still into looking more dressed up than before,” said B.K. Hamburg’s Kirsch. “They are coming back from that girly look — they don’t need to look like their daughters.”

Hughes agreed. “Customers don’t want to look like they’re 22,” he explained. “They don’t need to show off their midriffs anymore — though some of them can. They’ve been there, and they’re past that. They want their clothing, cars, jewelry, everything to be more substantial.”