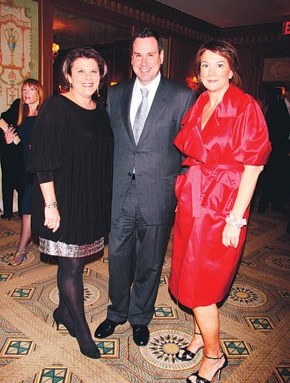 In a ballroom festooned with silvery balloons floating above the dinner tables, Charla Lawhon seemed like she was aloft herself, dressed in a vibrant red Donna Karan gown, and surrounded by friends, colleagues, designers and retailers.

“It’s so wonderful to be in a room with so many people you know,” said Lawhon, In Style’s managing editor, just before receiving the Commit to Win award at the Women in Need benefit, held at The Pierre New York on Wednesday night. Of her fashion statement for the evening, “It’s a little bold and a lot happy.”

She recounted to the crowd of 600 a visit to WIN’s Jennie A. Clarke Residence in upper Manhattan that serves 300 homeless families. “I was struck by the incredible amount of work that gets done on a day-to-day basis and year-to-year basis. That’s a lesson to all of those at The Pierre. Many of us in this room can learn about strategy and getting results.”

Among the audience was Saks Fifth Avenue chairman and chief executive officer Stephen I. Sadove, who was psyched about ringing the closing bell on the New York Stock Exchange the next day. Would he have preferred the opening bell? “If it’s a good day, then I’m happy.”

John Varvatos was gearing up for a kickoff event Thursday for his new store on the site of the former CBGB’s, a VH1 Save the Music benefit, with Joan Jett, Ian Hunter and Slash. “It’s starting at 11 and going to whenever.”

As guests table-hopped between courses, Jason Weisenfeld meandered to Isaac Mizrahi’s table and introduced himself as Jaqui Lividini’s partner. Mizrahi inquired about her daughter, Calliope, to which Weisenfeld responded without skipping a beat, offering information about the little girl’s outfits, office visits and what he called the cuteness competition between her and Gus, his dog. “Oh,” said Mizrahi, the lightbulb finally on. “You’re not the father. You’re Jaqui’s business partner.”

“Right,” Weisenfeld responded. “John is her other partner. We’re both J names, we’re both Leos and, if Jaqui’s in a bad mood, we both suffer.”

Kristin Chenoweth sang a rousing rendition of “Till There Was You” from “The Music Man.” “It’s my favorite musical,” said the Tony award winner.

In addition, the Peter Jennings Prize for essay writing by children in WIN housing was awarded to Aneesa, who wrote on friendship. Iyana, a WIN client, gave her story of despair, hope and triumph. “Now, we’re so happy. It’s our own house. My daughter has her own space. We can go into our own refrigerator. My plan is to keep moving forward.”

Ticket sales raised more than $1.4 million for WIN, which helps New York City homeless women and their families with housing, job training, domestic violence services, alcohol and substance abuse treatment and child care. Another $150,000 or so was raised on the spot, with a balloon designating each $100 donation. Liz Claiborne Inc. bought the most — 300 balloons in all. Karen Harvey, of Karen Harvey Consulting Group, committed to matching every dollar donated during the dinner up to $25,000. Also, in absentia, Mayor Michael Bloomberg proclaimed April 9 Women in Need day.