A Difference of Opinion

I beg to differ with my crabby colleagues about the CFDA Awards on Monday night. 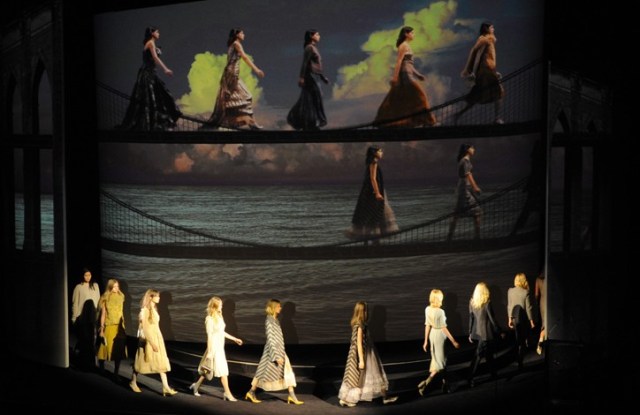 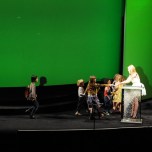 I beg to differ with my crabby colleagues about the CFDA Awards on Monday night. After reading their coverage on Wednesday, I felt as if I’d been at a different event.

Long ceremony? The show itself was over by 9:30 or so.

Speeches and videos that dragged on? Doling out X number of awards takes X amount of time. Further tightening would require eliminating anything remotely celebratory in favor of a terse reading of nominees and winners.

As for the films, having been involved in one two years ago and thus knowing the work and time invested, this may be biased. But most were terrific. At the top of the list: the women’s clothes on the bridge, and (in the opinion of someone with limited tolerance for random prop usage of kids and puppies) the delightful children’s accessories scavenger hunt.

Where were the parents of said scavengers? Come on, guys. Maybe at lunch with “The Cat in the Hat” parents.

I was hungry. Do a Scarlett O’Hara: Eat before. At past ceremonies with a seated dinner, we complained about how long in between courses.

Such snippiness detracted from the motif of genuine gratitude that pervaded the room and that WWD’s coverage did, in fact, note. One felt comfort in the sense of community intrinsic and necessary to this industry, but that often gets lost in competition and playful (or not so) fashion bitchery. True, Kim Hastreiter came off as caustic, her remarks indicating admiration for lots of designers, just not most of those assembled in the room who’d voted to honor her. But everyone else held back the nasties, whether it was Richard Chai and Christopher Bailey thanking former employers Donna Karan (both) and Marc Jacobs (Chai), or the quietly brilliant Tonne Goodman nodding to all who make a shoot work: photographers, models, hairdressers and makeup artists. And more humorously, Iman, who thanked “my mother and father for giving me a neck.”

Entwined with the obvious appreciation was the theme of change. While one can hardly consider the likes of Michael Kors, Jacobs, Narciso Rodriguez, Isaac Mizrahi and Anna Sui old guard, with two Lifetime Achievement Award winners in their midst, they’re not the young ones anymore. Maybe they held onto the youth distinction for so long because of the dearth, prior to the current happy explosion that dates more or less to the arrival of the Proenza Schouler boys, of multiple contenders for next-generation star status.

I was feeling a little crabby myself Thursday morning while heading to Donna Karan’s Greenwich Street studio, even if the final destination was her spectacular rooftop paradise. The occasion: a presentation of Urban Zen, including the launch of the brand’s new furniture collection, a boldly geometric teak and white-cushion affair made in Bali. (Until now, the tree-trunk tables and other such earthy fare have been one-of-a-kind items.) This was not just any presentation, but the kind for which Donna has long advocated: one featuring current-season merch. When asked why invite the magazines who can’t do anything with it, Donna noted that she’s perfectly content with coverage on their Web sites. (That’s a cue: For more on the collection, see WWD.com.)

Donna’s point that clothes should get press at the time of their retail availability has merit — there’s much that appeals about falling in love with a look online and being able to buy it right now — but that horse is too far out of the barn to rein back. Thus, the only way to put the concept in play on a larger scale is to establish a second set of shows each season — present spring to the press and fall to consumers. Hence my irritation. The working week, which, during collections is seven days long, allows for only so many rounds of shows.

Nevertheless, Donna dared to experiment. Beyond the fact that 10 percent of the store’s sales go to her Urban Zen Foundation, exactly how the clothes speak to what their designer calls an “evolved state of being” is unclear. More concrete is that the clothes are fabulous. The mostly undone, draped-here, tucked-there T-shirt dresses can swing artsy-cool-disaffected youth as convincingly as chic grown-up in casual mode.

Fabulous enough, worn on pretty, Zen girls meandering through a lush Zen garden in the sky, for a guest who arrived in non-Zen mode to (temporarily, at least) release her pique about the nascent prospect of yet another round of shows.