An Vandevorst and Filip Arickx are calling time on the label they founded 22 years ago in Antwerp.

Designers An Vandevorst and Filip Arickx

LONDON — It’s the end of an era for An Vandevorst and Filip Arickx, who have decided to shut their Antwerp-based fashion label A.F. Vandevorst after 22 years.

WWD has learned that the spring 2020 collection, in stores now, will be the last from the husband-and-wife design team who first met in 1987 on their first day of school at the Royal Academy of Fine Arts in Antwerp.

“We are humbled and honored to be known for exploring new boundaries; for creating a strong DNA with collections in a universe of fetishes, sensual folds and poetic extravagance; for effortlessly blending elements inspired by uniforms with subversive femininity and tailoring,” the couple said. 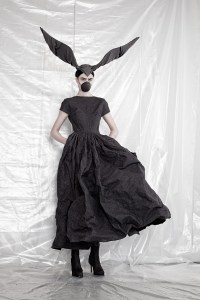 An A.F. Vandevorst look from fall 2015.  Courtesy of Stoops

They said they made their decision because “the dynamics in the fashion world have changed.  It is more challenging, uncertain and disruptive than ever before. We came to the realization that we won’t be able to maintain the same level of creativity and focus on storytelling, rather than on product, and to work in a way that has always distinguished us.”

The designers plan to host an event during Paris Fashion Week on Feb. 29 to thank their staff and supporters.  While in Paris, they also plan to showcase a selection from the label’s 2,000-strong archive, which they plan to sell to collectors and museums.

In a telephone interview, Arickx said the brand’s love of storytelling, its presentation style and aesthetics are not necessarily suited to the digital age.

“I think a lot of people still remember our shows with the beds; the presentation in the swimming pool, and the show with the motorcycles. These are all things, which for us, are very important and iconic,” he said. “But it’s OK. We have to evolve, the world has to go on. But it’s a world that is less tempting to be part of.” 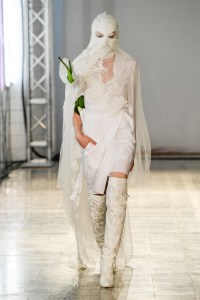 He said that over the past two decades, the brand “created atmospheres where you really had to be present in the moment to really get into our world, to see and feel what we wanted to tell. With all the digital evolution, a lot of things changed. Not only the perception of concept, but also the commercialization. On all different levels things changed.”

Known for their arty, conceptual shows and presentations, and joint love of Red Cross and hospital paraphernalia, the couple mixed deconstructed tailoring with military influences and feminine lingerie inspirations for their collections.

In response to the changing times, the two had experimented with different formats for their namesake label, such as film presentations and a partnership with the online showroom Ordre.com to present their collection to buyers.

In 2017, they discontinued their ready-to-wear line to focus on special, seasonless clothing capsules and a bulked-up footwear collection as a key pillar of their business. In early 2018, they marked their 20 years in business with a flashback anniversary show during the Paris Couture. 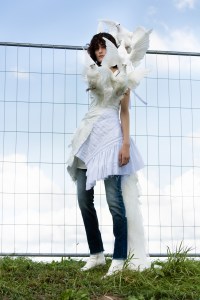 The couple said during the interview that while the label may be closing, this is not the end of their career.

“We are creative people, rather than business people, and we want to expand our horizons. We have many ideas and we’re trying to apply our experience to other fields of creativity — art, music, furniture, even design.

“And I think that’s the future, that’s where we will all will go to, in the end because people want more than just fashion from a fashion designer. We can see the opportunities.”