A new exhibit featuring work by the acclaimed architect opens in Paris at the otherworldly pavilion Karl Lagerfeld and Chanel commissioned in 2007. 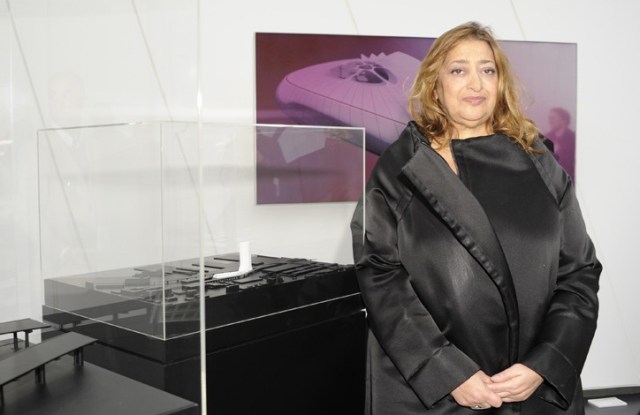 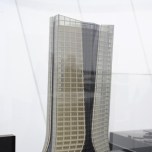 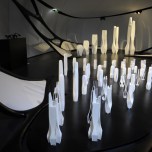 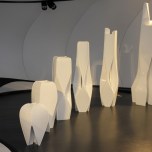 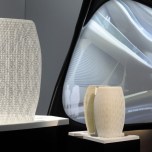 PARIS — Although architecture and fashion operate on different cycles — one permanent, the other perishable — is there a correlation between a strong trend the past five years for supertall buildings and very high heels?

Absolutely, according to acclaimed architect Zaha Hadid, a self-professed shoe addict who, incidentally, gave up on vertiginous styles many years ago after too many ankle twists.

“I do think fashion gives you an immediate idea about the time things happened,” she mused. “Even when [clothes] are retro, it’s always different.”

Dressed in glossy flats and an asymmetrical Prada coat, the 2004 Pritzker Prize winner was in town last week for the opening of “Zaha Hadid: Architecture,” an exhibition in the otherworldly pavilion Karl Lagerfeld and Chanel commissioned in 2007 for a traveling show devoted to art inspired by the French house’s iconic quilted handbag.

Although the Mobile Art container was sidelined only nine months into its two-year tour — forgoing stops in Paris, London and Moscow — Chanel donated the building to the Arab World Institute, which has installed it at the foot of the main Jean Nouvel-designed museum as a permanent showcase for contemporary art and design.

The inaugural Hadid exhibition is not a retrospective, but rather an insight into her experimental processes and forms, which Lagerfeld claims broke the visual impact of Bauhaus.

Parisians — weaned on Haussmannian formality — will finally get to experience one of her fluid and organic-yet-high-tech structures. She likened the torus-shaped building to a distored doughnut, in which visitors enter one door and, somewhat disorientingly, exit through another.

The exhibit features several detailed scale models, but also minimalist interpretations, including forests of futuristic skyscrapers all devised with a computer program employing “parametric” design. Some of the buildings featured — projected onto membranelike screens — are under construction, while others are purely hypothetical.

London-based Hadid, who employs close to 400 people at her fast-growing firm, confessed she toyed with the idea of a career in fashion instead of architecture, recalling her fascination in the Eighties with the original Joseph boutique, which she considered “revolutionary” in its mix of designer and indie brands.

Yet in architecture, she has accrued near-mythic status for buildings like the Maxxi museum in Rome, the BMW Central Building in Leipzig and the Chanel pavilion, whose shell of fiberglass-reinforced plastic was designed such that it could potentially be produced in multiples.

“Now the technology is even more advanced,” she enthused. “There are fabrics that are done in such a way you can make a piece of furniture out of it, and there are no seams. You can actually dress the chair.”

Hadid has dabbled in consumer products, designing shoes for Melissa and Lacoste and jewelry for Swarovski. “I would like to do fashion, but there are some really great people out there who do it better,” she said.

The architect said she holds a great appreciation for the technical knowledge required to have fabrics assume the desired shapes and forms. “I’m also interested in the way they make clothes; by they way they cut and put it together,” she said. “You can have ideas, but it’s not the same.”

Despite her great appreciation and affinity for clothing — Prada, Issey Miyake, Yohji Yamamoto, Colette, Corso Como 10 and Dover Street Market are among her regular shopping haunts in Europe — Hadid has created only one retail store: a Neil Barrett boutique in Tokyo.

“I would really like to do more retail,” she said, revealing a new commission to do a department store in Beirut for luxury retailer Aishti.

Actresses Anna Mouglalis and Rinko Kikuchi were among VIPs who attended the opening cocktail last Thursday. The Hadid exhibition runs through Oct. 30.