A Femmy Night to Remember

The 2008 Femmy Awards marked the 50th anniversary of the industry organization's annual cocktail and dinner gala, which drew about 630 retail and innerwear... 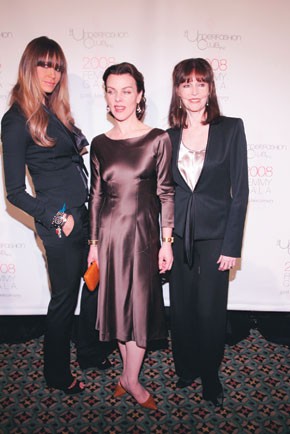 The 2008 Femmy Awards marked the 50th anniversary of the industry organization’s annual cocktail and dinner gala, which drew about 630 retail and innerwear executives.

The event, staged by the Underfashion Club on Feb. 5 at Cipriani on 42nd Street in New York, was hosted by actress Debi Mazar, known for her roles in the film “Goodfellas” and the HBO comedy “Entourage.”

“We at Dillard’s have a vision for a very special intimate apparel department that, first and foremost, will be filled with great intimate apparel products designed by forward people,” he said, adding that the department’s “environment will be simple and innovative with a staff of people who can put a customer into the right size bra.”

Worsham, a big fan of the Sixties TV spy sitcom “Get Smart,” was introduced by his friend Barbara Feldon, who co-starred as Agent 99.

Macpherson, who was also being honored for her contributions to the lingerie industry, was introduced by former husband Gilles Bensimon, a fashion photographer and creative director of Elle magazine.

“We were married and that’s what I have to say about that,” Bensimon told the stunned audience. Mazar quickly intervened and said, “You’re supposed to introduce her and give her the award.”