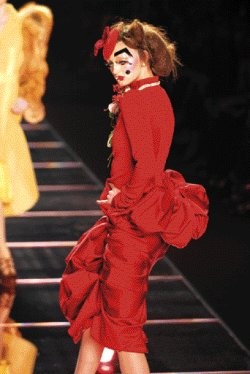 John Galliano: “Fiddle-dee-dee,” pouted Scarlett O’Hara. “War, war, war. This war talk is spoiling all the fun at all the parties this spring.” Pity Scarlett never met John Galliano. Because his antidote to war talk is revelry — in an Andrews Sisters-Joan Crawford kind of way. For the collection he showed on Sunday night, Galliano staged a campy, witty delight that sweetly lampooned that original power woman who emerged during the Forties when, with a dearth of men to run things, women had to take charge. His parade of Model Dearests flaunted their audacious attitude in cartoon drag-queen makeup — paper eyebrows, dime-sized beauty marks, red lips lacquered to a patent leather sheen — beneath which they wore some beautiful clothes.

Remember Galliano’s gigantic springtime getups? Gone! And in their place, clothes that threw more curves than a major league pitcher. But then, John was working the war motif; at one point, the line “and his number came up and he was called in the draft” was repeated again and again on the soundtrack. So do you think he would rather be kissed goodbye and sent off to the front by his Boogie Woogie Bugle Babe done up in a cumbersome tent, however fanciful, or a sexpot dress? Duh! Oh, for the memory of a hometown honey in a cherry print! Then there were suits, a flying-buttress collar here, a skirt with multiple ruches there. But these had nothing on the Grable-esque lingerie looks — oh, for the days when garters were more than a bad-girl staple! And when a girl wants to feel cozy, how about a big, frothy sweater in ballet pink, all tied up with ribbons.

Not surprisingly, Galliano accessorized to the nines. And if the campy hats don’t make it into — and fly out of — his soon-to-open store, the fabulous bow handbags sure will. And as for those platforms in Ladurée colors — somehow, doesn’t a rhinestone buckle just make the world a brighter place?

Valentino: At Valentino, ladylike dressing isn’t a trend that wafts its way down the runway, then gets replaced six months later. Oh, no. Here, ladylike is a way of life. While the fall collection he showed on Tuesday may never go down in history as an all-time favorite, Valentino did send out some truly dramatic and rich clothes that will fulfill his fans’ cravings and then some.

Suits came trimmed with fur on pockets and hemlines. A sleek brown fur jacket topped a supple brown suede skirt, while a lyrical white poet’s blouse with lace edges was shown with a filmy accordion-pleat skirt with a wide satin band at the hem. But these were only a few winners in Valentino’s classically luxe parade.

Anyone looking for a little Oscar magic is in luck. If Valentino has his way, Harry Winston will get the night off, while his dresses do all the work. The plunging necklines of his fun trompe l’oeil evening dresses came bedazzled and bejeweled with more swags of baubles than most jewelers could find in the safe.

As for those looks that didn’t work, suffice it to say that they were so tricky that they simply didn’t belong on the Valentino runway.

Stella McCartney: Stella McCartney knows what makes her customer’s heart race, and honey, it ain’t raindrops on roses or whiskers on kittens. The English rappers Big Brovaz kicked out a new version of that old “The Sound of Music” tune at her runway show, listing Stella’s dresses as among their favorite things. Well, why stop there? They could have dropped a rhyme about her great jackets and skirts, too, and what about those light-as-a-feather knits?

Though she started the show playing heavy beats, McCartney kept the tough stuff in the background, softening her fall look and smoothing over any rough spots with modern gentility. And she did it without sacrificing one ounce of sexiness. Cropped jackets and silky windbreakers topped slender skirts in satin or tweed. Spliced satin corsets ran toward the futuristic with their peaked fronts, while McCartney went back to her Savile Row roots to turn out fantastically tailored coats with volume in the sleeves.

In keeping with the subdued mood, the palette ranged from pale pink to lemon yellow to dusty mauve to teal, and it made for a look that was serenely seductive without a trace of the campy edge McCartney worked in the past. At the same time, however, what the show lacked was a whiff of the quirky, cheeky fun that is uniquely Stella. She’s buffed up her image to a high shine, but she’s got to remember she’s still just Stella from the block.

Hermès: Martin Margiela’s quiet collections for Hermès speak volumes about what women want. Let the others go in for tambourines and trumpets like a Mardi Gras band, not our man Martin. He knows that Hermès customers count on the house for true luxury, stately clothes and real-deal refinement. This season, Margiela delivered with comfort clothes, including chunky, rich turtleneck sweaters. And he sent out immaculate cashmere coats, especially a pair in midnight blue and camel with their sleeves slit along the inside seam to create a caped effect, and others that came with matching cashmere bags trimmed in soft leather.

But while he protected the house’s traditional heritage with the up-close-and-personal detailing his customers demand, Margiela, in his sly way, acknowledged some of the most important trends of the season — no, not the miniskirt, silly — but the men’s wear influence and everyone’s craving for fur, the bigger and bolder the better. The former came in an oversized herringbone coat, for the heiress with a bohemian streak. The latter — a thick fur bolero, cropped jacket and a glorious version with slit sleeves — were for the truly glamorous type who knows that luxury is a precise art.