A Fun and Sexy Valentine’s Day

The U.S. may be in a conservative mode, but seductive lingerie that leaves little to imagine is the Valentine's Day gift of choice.

By Karyn Monget and Rusty Williamson on February 14, 2005
View Slideshow 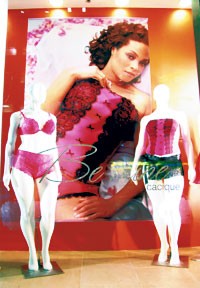 NEW YORK — The U.S. may be in a conservative mode, but seductive lingerie that leaves little to the imagination is the Valentine’s Day gift of choice.

Department and specialty store and high-end boutique retailers across the country said they initially expected the ramifications of economic and employment uncertainty to continue to quash purchases of high-ticket items and boudoir fare that had over-the-top sex appeal.

But to retailers’ delight, the buying mood of consumers for Valentine’s Day has been upbeat, particularly with the abundance of special-looking merchandise that merchants said inspired consumers to spend. Merchants also noted that while sexy fare is a predictable sell for the holiday, the preference this year was for merchandise that is more sexually suggestive and risqué.

Retailers also generally said that an increasing number of women were buying lingerie as an indulgent Valentine’s Day gift for themselves. Buying patterns were similar among men and women, who were described as purchasing gifts that have a fun, sexy appeal. A number of retail executives said male customers, a majority of whom traditionally feel awkward shopping for lingerie, were not embarrassed and knew what they wanted.

“I think it’s all of that sex on TV like ‘Sex and the City’ and ‘Desperate Housewives,’” said Polly Berg, owner of her namesake store in Wayzata, Minn.

Bestsellers featured special detailing such as girly pink or red satin ribbon trim, lace-up back treatments, lace overlays and eyelash lace trim, provocative cut-out effects and allover sheer silhouettes. The top-selling solid colors were candy pink followed by lipstick red and black, while best-selling color combinations were black with pink or red trim, and pink or red with black trim. There also was a demand for a variety of blue shades on the West Coast, from French blue to baby blue. Key fabrics included shiny looks, such as polyester charmeuse or satin, or transparent chiffon, georgette and mesh.

Two themes underscored the buying trend for gift-giving: ultra-feminine looks that had a sweet, ingenue quality, and items that were described by a majority of merchants as naughty-looking and blatantly sexual.

“Thongs are the number-one gift item for us for Valentine’s Day,’’ said Donna Wolff, vice president and divisional merchandise manager of intimate apparel at Bloomingdale’s. “Thongs are functional, fun and sexy, and we are selling them at all price points to all people. Instead of a bouquet of flowers, we are suggesting to customers a bouquet of thongs — at least seven, for each day of the week, or a dozen.”

In addition to thongs by Cosabella and on Gossamer, Wolff singled out two thong gift sets as “extremely popular” — three pair by Calvin Klein Underwear retailing at a suggested $27 and three pair by DKNY Underwear for $24. Another hit was the Bloomingdale’s three-pack of novelty thongs by St. Eve for $15.

Jennifer Lowitz, director of corporate communications at Frederick’s of Hollywood, said the combination of celebrities and lingerie created a powerful aphrodisiac for Valentine’s day business.

“Our number-one bestseller is a sheer, black georgette baby doll styled at camisole length,” Lowitz said. “It’s ruffled at the bust with pink trim and a pink bow closure and sells for $29. But our second and third best-selling items were those we took to our shop at the Sundance Film Festival. Once the list of celebrities who received these [gift] items got out to the public, demand skyrocketed at stores and on-line, and have become key items for Valentine’s Day.”

A spokeswoman for Bendel’s said the best-selling gift items on the Manhattan store’s new third-floor lingerie department are from the Objets d’Amour collection in the Rykiel Woman in-store shop.

“It’s a high-end lifestyle shop with loungewear, pajamas and bras,” she said. “Three items that double as vibrators are our hottest gifts: a makeup brush, a lipstick and a rubber ducky. They sell from $78 to $138. We are 100 percent sold out and had to Fed Ex Paris for more.”

“Any kind of baby doll has been selling very well for Valentine’s Day,’’ said Lastenia Dardano, U.S. manager of Myla, a British firm with a Madison Avenue boutique. “Our Lotus and Julia styles are the bestsellers with molded cups, lace overlay, tulle ribbon straps and pieces of chiffon that have a torn look, a nymphette look.”

Other key gift-giving items are a silk and satin garter and crotchless knicker set that retail for $100 and $150, respectively, Dardano said. A quarter-cup balconette bra of satin and tulle netting “which exposes the nipples” is also in demand for $190.

Rebecca Apsan, owner of La Petite Coquette, a Manhattan lingerie shop, said embellished thongs and camis and boy-cut shorts by Mary Green, Arianne and Loungewear Betty were her top items for Valentine’s Day. But one item in particular has been a “very good seller” — a $75 jar of aphrodisiac oil in a gilded gold bottle.

“Anything that’s going to give a guy a lot of loving for Valentine’s Day is selling,” said Apsan, who was preparing to host an informal lingerie fashion show and champagne party for 100 male customers.

“Last year was the worst Valentine’s Day I’ve ever had in 18 years,” said Chris Legatski, owner of Allure, a ready-to-wear and lingerie shop in Santa Fe, N.M.

But more women are coming this year to buy something sexy for themselves or to wear for their husbands and boyfriends, she said.

“The men are just coming in for something sexy,” Legatski said. “When I show them a $150 bra, I can tell they’re in sticker shock. They can’t understand why a bra would cost $150. So, I tell them it’s the difference between a Ford and a Mercedes. Once they buy it, they become extremely loyal.”

Catherine Lippincot, director of corporate communications at Lane Bryant, said the specialty chain’s expansion into lingerie “continues to do better and better. Plus-size women are looking to buy more bras and panties and they’re loving it.”

She said anything detailed with eyelash lace trim was successful for Valentine’s Day. Top ideas include cheeky panties that ride high on the derriere, full décolletage balconette bras with lace overlay, and baby dolls and long classic sleep gowns with a deep-plunge back.

Over-the-top sexy looks may be de rigeur at the moment, but at upscale stores such as Bergdorf Goodman, fashion continues to drive lingerie business, said Roopal Patel, women’s fashion director.

“The idea of color is still very dominant,” said Patel, noting that bestsellers for Valentine’s day are luxurious silk sleepwear sets by Patricia Fieldwalker, playful camis and boy-cut shorts by Leigh Bantivoglio and sheer mesh items by Samantha Chang. “For us, it’s not a one-shot deal where you wear it for just one time. You wouldn’t go to Bergdorf’s for cut-out panties.”

Maureen Haag, owner of Lucky Girl in Plano, Tex., said, “It’s all about romantic and sexy fashion items. We’re doing well with Wendy Glez’s raspberry chemises, G-strings, camisoles and boy shorts, all retailing between $29 and $75. They’re sexy and comfortable and cling to all the right places. Other bestsellers are Betsey Johnson’s heart-and-arrow motif red thongs and tap sets trimmed in pink, at $18 to $58, and Mary Green’s nude, pale blue and red silk baby dolls, camisoles and side-tie G-strings, at $25 to $55.”

“I ordered them just for grins and was really surprised that we just about sold out,” Clements said. “Both women and men bought them. The hottest items have been La Perla’s Tattoo collection that’s cut from red and nude mesh and lace that gives the illusion of romantic tattoos. Styles include bras, panties and chemises Retail prices are $130 to $480 but there’s absolutely no price resistance. This year our Valentine’s business doubled against 2004.”

Janet Mitchell, owner of The Lingerie Store in Oklahoma City, scored a big hit with Cosabella’s red sheer mesh camisoles, low-rise thongs and shelf bras in fuchsia and red priced from $15 to $45 and beyond; Nu Bra’s self-adhesive backless and strapless bras retailing for $32, in nude and black; Sassybax’s camisoles and sport bras from $48 to $62, and PJ Salvage’s novelty lounge wear in fuchsia and pink dots, at $22 to $30.

“Shoppers are in a very good mood this Valentine season and sales are way up,” Mitchell said.