A Gem of a Son

Evan Yurman just bought himself a purple 1970 Plymouth GTX, and he can’t help but brim with excitement about his first muscle car.

“I collect stones and Masonic jewelry and soon, cars,” Yurman said, unable to contain his... 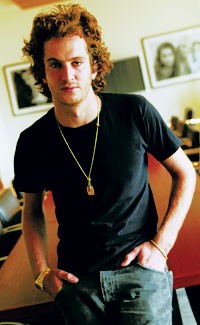 Evan Yurman just bought himself a purple 1970 Plymouth GTX, and he can’t help but brim with excitement about his first muscle car.

“I collect stones and Masonic jewelry and soon, cars,” Yurman said, unable to contain his enthusiasm.

The purchase by the 22-year-old jewelry designer, the son of powerhouse designers and entrepreneurs David and Sybil Yurman, may have been innocent but the symbolism is notable. It’s the kind of car that’s worthy of a rebel, yet Yurman was able to get it in a color often associated with royalty.

He doesn’t appear to have succumbed to the pressures and pitfalls to which the children of some other New York success stories often fall prey.

Lately, Yurman has generated buzz for the custom-made pieces he makes as a side hobby for the likes of Kate Moss and As Four, as well as for his increasing involvement in the family enterprise as director of the men’s business.

“I don’t take myself seriously like that,” he said. “I don’t think of myself as following my father’s footsteps. My father and my mother and I have such a close connection to each other that I am not really interested in gaining fame on my own. This isn’t about me, this isn’t about Yurman, this is about jewelry, about adorning yourself with things that make you feel good.”

Yurman is involved in the design, marketing, p.r. and sales of the men’s collection. His decision to become a jewelry designer was based on an unusual, yet whimsical, stunt.

“Before I started making jewelry, I was testing to see how it would sound if I made jewelry,” he said. “People would ask me, ‘Why are you here?’ And I would say, ‘I make jewelry.’ Well, it sounded good, so I thought now I have got to do it.”

Yurman started his apprenticeship at David Yurman two years ago. Moving from department to department, he learned about the facets of the business, from merchandising and product engineering to sales, shipping and returns. He also learned to make jewelry on the workbench in the company’s TriBeCa headquarters in New York.

He may physically be the perfect concoction of his parents, but he has a philosophy that is his own when it comes to design. Yurman said he prefers to work in yellow gold over white metals. And while he respects his father’s signature cable design, it’s not necessarily something he would utilize for himself.

“I did a whole series of men’s jewelry without cable and just the logo,” he said of his first men’s designs.

Making men’s jewelry under the David Yurman moniker allows him to explore his several hobbies. In his free time, he likes to make his own jewelry and he has quickly established a following with his custom-made designs. Kate Moss, whom he met during a David Yurman campaign shoot a little more than a year ago, recently ordered a ring made from a 40-carat moonstone and a 60-carat onyx grasped by two tiger claws. Yurman also designed the jewelry for As Four’s spring 2005 runway presentation. While the pieces were made specifically for the runway, Yurman said he expects the collection to be offered to high-end specialty stores next year.

Yurman sells his custom-made jewelry at prices from about $800 for an 18-karat rose gold double-finger knuckle ring, to the typical top price of about $18,000 for 18-karat white gold or platinum wedding bands.

“I am in love with the precious, the small, the colorful,” he said. “I am attracted to stones. If I find a nice stone, I get a feeling for the piece. It’s never about a statement, it’s never about how expensive it is or looks. I only make jewelry that I myself would wear.

“I like to make jewelry that people can identify with, that they feel good about,” he said.

Yurman has a sense of humor that could be misinterpreted as arrogant in print, but in reality is more tongue-in-cheek.

“I am the prince basically,” he said, with a mischievous smile. “I am the heir apparent. My grandfather said, ‘Evan, I am going to give you 10 grand, and I am going to buy you a motorcycle, and I want you to just go and do what you’ve got to do. Go and live, don’t start working, go be who you want to be, then come back and we’ll talk.’”

But in another symbolic gesture, Yurman chose to decline the offer and stay in New York to work.

“It made me think though,” he said. “I don’t have to do this, I could do whatever I want in my life…whether it is being an apprentice for some ancient Japanese metalsmith or a surf bum in Kauai. But I chose jewelry.”