A Grand Presentation for Scent 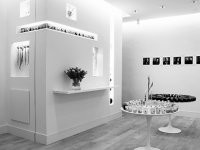 This story first appeared in the March 7, 2003 issue of WWD. Subscribe Today.

The French beauty manufacturer and retailer known for its quirky scented items unveiled a new store format, called La Grande Boutique (The Big Boutique), here last weekend. The 1,615-square-foot store on the Right Bank is the brand’s fifth door in the French capital and its biggest. The others average 430 square feet each.

This is the first opening for L’Artisan Parfumeur since it was acquired by New York-based Cradle Holdings in January. The plan is to refurbish the L’Artisan Parfumeur doors in Paris and the one London-based store during the next two years so their interiors resemble the new format.

Conceived by architect Jeanne Dumont, La Grande Boutique is on two levels. The ground floor features two fragrance bars and central tables that display scented objects and glasses containing pieces of cloth. These are soaked in the base notes of the brand’s fragrances. The idea is to have customers smell the last phase of a fragrance’s dry-down, rather than make them take the time to experience its entire evolution. On the first floor also is a cash-and-wrap desk.

Up one flight of stairs, customers find a salon-style room replete with books and — ultimately — some scent-related art. It also contains a fragrance organ and a counter for choosing fabrics for made-to-order candles, scented cushions and cloth flowers.

“People want personalized things [such as scent and home fragrances],” said Marie Dumont, creative director for L’Artisan. “They want things that resemble them, that they participate in. They’ve had enough of standardized things.”

So made-to-order fragrances will also be available at the store. These will take about three months each to create to the tune of about $4,170 at current exchange rates for a year’s supply.

“It’s very modern, but very classic and warm at the same time,” Marie Dumont said of the boutique’s decor. “We wanted something that doesn’t resemble a new glacial and cold concept store.”

While rollout plans for additional L’Artisan Parfumeur doors have not been confirmed, Marie Dumont said the brand plans to increase its international presence.

The U.S. and U.K. will be key to this push, since Cradle, also owner of Penhaligon’s and Erno Lazlo, has a strong positions there.