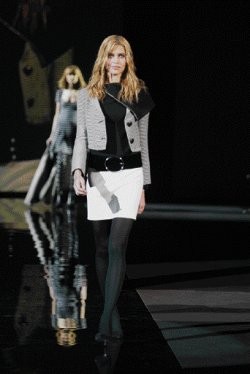 Emporio Armani: With the shapely pair gracing the invitation and show notes that both began and ended with the phrase “Legs, legs and more legs” — or “Gambe, gambe, gambe,” as the case may be — one hardly had to wonder where Giorgio Armani’s focus would lie at Emporio Armani. Yep, miniskirts. But while his clues were unsubtle, Armani’s case for the reality of short skirts — real women buying and wearing them — was as smooth as glass.

In fact, the show was a dissertation on working a flirty mini, whether it came out tiny and belled, in flippy chiffon or stiff and A-lined, pleated, embroidered or ruffled. But no matter how short the hemline, Armani’s Emporio girl never turned tarty. He maintained an ease throughout, pairing many of those short skirts with a variety of jackets that was nearly as broad — and just as appealing. These ran the gamut from a belted anorak to a shrunken fur to a tweed bolero for day. Armani then merged the two themes again for evening, showing a supreme babydoll dress in chiffon with a Mongolian lamb bolero that took fall’s formula glamourous.

While the collection had its off-kilter moments, too — especially a pair of blinding crystal belts worn as barely-legal bandeau tops in the finale — a lighthearted reality ruled the day. Still, the show itself was not without the kind of strange theatrics particular to the house. Milla Jovovich, Emporio’s official poster girl, was whisked out of her front-row seat three-quarters of the way through the presentation and ushered backstage. After a quick change — from a white hooded sweater into a pretty pink minidress — she reappeared by Armani’s side as he took his bow. Then Jovovich herself strode the runway’s length like a guest designer, waving at the cameras. But then, maybe that’s the point. Armani’s are clothes a girl can quickly make her own.

Pucci: In his second collection for Pucci, Christian Lacroix worked the house’s classic splashy prints into every shape imaginable, including snug sweaters, a puffy parka and quilted vest perfect for, say, an après-ski scene in a Pink Panther movie. It was not, however, the Pucci collection Lacroix fans are still hoping he’ll do. Lacroix is an innovator, a wizard with prints, but he hasn’t worked his magic with those Pucci swirls — yet.

While last season, the signature whirligig patterns were whipped up into a motocross frenzy, this time around the designer pulled back, way back, sending out basic shapes — a trench coat, a boatneck dress, a simple skirt — that let the prints do the talking. Trouble is, we’ve already heard what they have to say. Lacroix will have to find a way to combine his unique sense of fantasy with the reality of Pucci’s tradition to take the collection to a new place.

Can he do it? Of course he can. The kooky furs he showed — once white, then perfectly Pucci-fied with graphic patches of lime green and pink — prove it. These were whimsical, luxe, totally impractical. And put a smile on everyone’s face.

Krizia: For fall, Maruccia Mandelli set out to infuse the Krizia collection with a “spirit of contemporary contradiction,” according to her show notes. Well, she can say that again. Some looks — a white peacoat worn over skinny silver lizard-skin pants or a dramatic high-collared black coat — pointed toward a pared-down, promising future. Others worked dreary fabrics into even drearier shapes with an off-putting avant-garde attitude. Ah, the contradictions knew no bounds. And those in the audience were left similarly divided. A few major editors said they felt that the collection looked fresh, wearable and better than ever. Others — just as major, mind you — had a near-visceral negative reaction to the show.

The recent restructuring at the house, depending on how you look at it, could be either good news or bad. For the past few months, Hamish Morrow, the young designer from London, has been working with Mandelli in the Krizia studio. Could the collection’s fractured look — and the audience’s split decision — be a result of this very new collaboration? Only time will tell whether the match was meant to be.

Philosophy by Alberta Ferretti: With an intensity habitually demonstrated by top athletes, at Philosophy, Alberta Ferretti narrowed her focus down to a single point. Her message: sporty parkas, cozy knits and all manner of skating skirts. Take it or leave it.

Indeed, there were plenty of these icy looks for the taking, including a white shearling jacket and a wisp of a white chiffon skirt perfect for any snow princess. Other varieties — in red, purple or gold, knit or quilted or decorated with silver rings — benefited from Ferretti’s narrow Nordic formula, too.

But as one skater girl followed the next, the bulk of the collection, however cute, seemed less and less sharp, like a skate blade that’s been around the rink one too many times.