The Legacy: De Sole and Ford turned the floundering Gucci into a $2.54 billion giant, and made overall luxury more appealing to today’s youth. 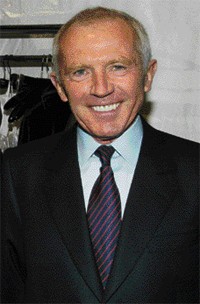 LONDON — A decade has passed since Domenico De Sole saved the job of Tom Ford — and the rest of the Gucci design staff — after Maurizio Gucci, in a fit of pique, insisted on firing them.

This story first appeared in the November 5, 2003 issue of WWD. Subscribe Today.

Since then, De Sole and Ford have turned the nearly bankrupt fashion house into a $2.54 billion luxury group, they’ve fought off hostile takeover attempts, defended Gucci in venomous courtroom battles — and occasionally found time for a break with their families at Ford’s ranch in Santa Fe, N.M.

Gucci’s transformation over the past 10 years owes as much to hard work as it does to De Sole’s and Ford’s rare friendship. “I would trust my life with Domenico, and I believe he feels the same way about me,” Ford told WWD in 2000. “He’s a great man and a great friend.”

Never was that bond so evident as when Gucci became the target of a hostile takeover attempt from LVMH Moët Hennessy Louis Vuitton in early 1999. Ford vowed to jump ship with De Sole if LVMH took over Gucci. “It’s such a rare thing to find someone you trust, and someone with whom you can work so well,” said the designer in 1999. “I would never have given that up.”

And while the business partnership may be over for now, their legacy in the luxury world lives on. “Together, they reinvented the word ‘luxury’ as it related to fashion. The luxury boom started with Gucci,” said Dawn Mello, who served as Gucci’s creative director from 1989 until 1994 and hired Ford.

Mello added she was surprised that PPR let De Sole and Ford go: “I wonder if PPR actually understands how rare their kind of talent is.”

Claire Kent, chief luxury analyst at Morgan Stanley who has tracked the company’s progress since its 1995 IPO, said the two are responsible not only for turning Gucci into one of the most powerful luxury brands in the world, but for making luxury overall more appealing to today’s youth.

Since 1995, sales at Gucci have more than doubled, earnings have more than tripled and Gucci has gone from a virtually bankrupt company to one of the world’s largest luxury goods groups. That’s all thanks to Ford’s catwalk creations and De Sole’s business model that protects brand purity by avoiding licenses, franchises and second lines. De Sole has also gained a reputation for running an air-tight ship, with minimal bureaucracy and stringent cost and inventory controls.

Indeed, by 1998, Gucci’s results were so good, and the stock so undervalued, that Prada chief Patrizio Bertelli stockpiled a 10 percent stake in Gucci and then approached De Sole with proposals for a “strategic cooperation.” De Sole stonewalled the overtures on grounds that that he didn’t want to cooperate with a competitor. Less than a year later, Bertelli sold his stake to LVMH chief Bernard Arnault to help him with his takeover bid.

It’s anyone’s guess what Gucci might have looked like had LVMH won. LVMH chairman Bernard Arnault declined to comment Tuesday on the news that Ford and De Sole will exit the firm in April.

But analysts, who spoke on condition of anonymity, are convinced LVMH would have been likely to pursue a “scorched-earth” policy in making over the brand, tossing out Ford and De Sole anyway.

The intervention of Pinault-Printemps-Redoute and its owner François Pinault prevented all that. In the beginning, it certainly seemed like a match made in heaven. Pinault, who controls PPR, arrived as Gucci’s white knight, paying some $3 billion for a 40 percent share in the fashion company, effectively wresting control from Arnault, who had been accumulating stakes of Gucci since early 1999, rising to a 34 percent holding.

The arrival of the self-made tycoon, whose fortune was built on such diverse businesses as lumber and mail-order catalogues, unleashed an unforgettable round of acrimony between Pinault and Arnault. The two men exchanged barbs in the press and took each other to court on allegations of defamation.

Ultimately, in September 2001, LVMH and PPR settled; with PPR agreeing to buy LVMH’s stake in Gucci for $94 a share. Meanwhile, PPR also agreed to buy out all Gucci’s minority shareholders in April 2004 at $101.50. That put option was cut to $85.52 earlier this year after Gucci paid a $1.58 billion dividend to its shareholders.

Pinault’s investment had allowed De Sole and Ford to pursue one of their dreams: transforming Gucci into a multibrand player that could rival LVMH.

In the end, LVMH made off with nearly $676 million in capital gains on its Gucci investment and the war was declared over.

Now the battle has moved into the competitive arena. Arnault has boasted he will build Fendi, in which he gained a controlling stake in November 2001, into Italy’s leading fashion and leather goods house.

Meanwhile, Ford and De Sole used the funds Gucci got from PPR to acquire Yves Saint Laurent, YSL Beauté, such brands as Balenciaga, Boucheron and Bottega Veneta and to back new businesses, including Alexander McQueen and Stella McCartney.

But while the core business has remained relatively strong, Yves Saint Laurent still is in the red and the smaller businesses remain in their startup phases. Gucci, like most other luxury groups, was hit hard by the events of Sept. 11, 2001, as well as the global economic downturn that followed, SARS and the war in Iraq. Last month, it reported a 47 percent drop in net profits to $26.6 million from $50.2 million on a 1.1 percent rise in sales to $684.5 million from $676.8 million for the second quarter ended July 31. But De Sole was bullish about the second half, saying the group hadn’t seen such growth rates since before 9/11.

Ford and De Sole will remain at Gucci to see the financial year through. Regardless of what happens in the remainder of the year, Mello, who runs the industry consultancy Dawn Mello and Associates, said the future is bright for both men.

“Tom may not even choose to continue in fashion. He has a very broad sensibility and there are many things he could do. He could go to Hollywood and go into film.” As for Domenico, “He could easily sail his boat around the world. But there are a lot of companies out there who need him, both for his sense of aesthetics and his hard-line approach to the business.”

Whether he’ll accept any offers is still a question mark. Three years ago, De Sole told WWD: “The most important gesture for a manager is to retire. And I plan to do that when the time is right. In the meantime, no one is going to push me out.”