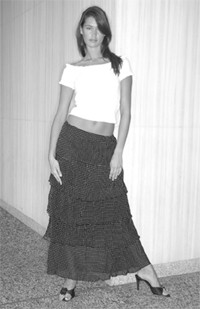 LOS ANGELES — Comebacks aren’t just for Hollywood — the apparel industry, too, has its share of encore performances by top executives.

This story first appeared in the November 12, 2003 issue of WWD. Subscribe Today.

For Carole Little, a onetime powerhouse in careerwear and better sportswear whose company approached sales of $375 million during its late-Eighties heyday, it’s time to reincarnate.

Under the banner of her two-year-old design office, StudioCL Corp., she’s launched a new line named LinQ — an acronym for loving, intelligent, nurturing and quality — which, she says, is about embracing women’s fashion and value needs.

“It’s about comfort, feeling pretty and a big component is value — the consumer is too well-educated about it not to deliver,” Little said.

This time, her focus is updated misses’ sportswear separates with slim-looking pants, printed tops, flowing skirts and yarn-dyed jackets crafted from rayon and crinkled silks, linen and striped denim with spandex. With 32 styles, she plans to change colors and prints monthly and raise the bar with details.

She’s resurrected some of her classic styles, such as a button-pocket shirt with epaulets. Among the newer numbers are denim jackets with flap chest pockets, epaulets and contrast stitching, bias-cut rayon georgette polkadot skirts in tiers, fabric-blocked blouses, blazers with split sleeves and reversed pearl buttons, and edgier styles, like a mesh blouse with drawstring bottom and front Velcro pocket.

Smiling, she said it doesn’t hurt that some of her styles resembled those alighting from New York’s spring runway.

“There was Oscar de la Renta showing tiered skirts and trim tops, and that’s the look I’m going for here,” she said.

The item-driven collection, with wholesale prices ranging from $24 for a top to $65 for a jacket, begins shipping in February with expectations for better department store business.

“I don’t have to fit the whole world — just a few individuals,” she said. “I definitely feel freer with it to do what I want to do.”

First-year sales are expected to hit $15 million to $20 million, not quite the blockbuster of the past, but that’s fine with Little and her business partner, Leonard Rabinowitz. To keep costs at bay, they won’t open a showroom here. They opened a 2,000-square-foot showroom in New York this month, and they maintain offices in South Korea and Hong Kong to oversee production out of 10 factories in Indonesia, Vietnam, China and South Korea.

“We’re a streamlined operation — we don’t need the 800 to 1,000 employees of the past,” Rabinowitz said, gesturing around the airy, open-ceilinged 5,000- square-foot office that houses 14 employees including patternmakers, artists, designers and the administration department. “We’re much closer to the product and more hands-on.”

It’s a new chapter in the long book of apparel stories for Little, who started her first company in 1974 with Rabinowitz following a trip to Paris’ Left Bank, where updated career styles were in abundance. She came back with ideas for buttoned pocket blouses.

Business grew, sales thrived, and the firm eventually merged with Chorus Line Corp. in 2000, an ill-fated move that led the company, which was to be legally named CL Fashions Corp. to bankruptcy four months later. According to court papers, the combined liabilities of the two firms were about $80 million.

But Little and Rabinowtiz kept at it. With StudioCL, they’ve pursued private label development for department stores, including Dillard’s Inc., a partnership that ended in April.

With their legal woes settled last May (terms weren’t disclosed) with Levine Leichtman Capital Partners (owners of Chorus Line) and GMAC Commercial Credit, they were ready to branch out with their own labels.

First came a venture with QVC Inc. in August for a line called In Encore, sold only through the cable channel’s American market and on its Web site. The 12-piece line is expected to generate $10 million in sales by 2004.

Now, they hope to generate new interest with their line distributed through retailers.

Industry observers say the line can bank on the strength of its founder. Even a survey conducted by the NPD Group last year ranked Carole Little as the 13th most comfortable brand, even though it stopped shipping two years ago.

“She knows that business better than anybody,” said Paula Loevner, merchandise analyst for better at Los Angeles retail consulting firm Directives West. “She knows the retailers, the price issues and I’d think she’d execute on the voids and needs of both the retailer and the consumer.”