The brand's designer kids line for girls ages 2 to 8 made its third stop on an international debut tour in New York this week. 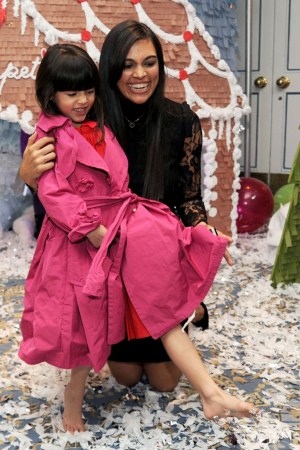 “Oh! I think we should have her sashay through the room,” said a sales associate, stepping back to survey the look she had just styled for Sienna Lightman, a pretty young shopper, who showed off a pink taffeta trench ($1,570) cinched over a red sundress ($1,105) with a few exuberant twirls. In many ways, the scene at The Pierre Wednesday afternoon was standard operating procedure for a private luxury shopping event. Except the client was a 6-year-old, who, mere seconds before being whisked behind a folding screen to try on her bounty of expensive merchandise, was crawling on the floor like a rabid animal. “Did that sugar hit you?” asked her mother, Suzana, with a laugh.

This story first appeared in the December 19, 2011 issue of WWD. Subscribe Today.

The mother-daughter duo had flown in from Memphis specifically for the Lanvin Petite pop-up shop in New York, the house’s third and final stop on an international tour, which included Paris and Monaco, to launch its designer kids line for little girls ages 2 to 8. For the past hour, Sienna and her fellow clients had sat at a long table set with a high-fructose spread of cookies, gumdrops, red licorice laces and macaroons. Upon entering The Salon, which was the site of the Lanvin for H&M shopping event a year earlier, each guest was bestowed with an apron printed with colorful hearts and an illustration of Alber Elbaz’s smiling face, a chef’s hat and a gingerbread house to decorate. That proved engaging for about 15 minutes, at which point the confectionery arts were mostly being tended to by the mommies, nannies and John Demsey, the lone dad at the party.

Distractions abounded, none more popular than the confetti of fake snow lining the floor of a life-size gingerbread house set in the corner. One waiter in a white coat served juice boxes and milk on a silver tray, another made the rounds with Champagne for the grown-ups. The party photographer, Billy Farrell, prodded moms and daughters to pose for his camera, a balloon artist churned out abstract hats and twisty swords, while a pianist tapped out “The Hills Are Alive” at the baby grand.

Every now and then a sales person would appear and discreetly hand off a little blue shopping bag to the moms, who included Adelina Wong Ettelson, Coralie Charriol Paul and Alexis Bryan Morgan. This was a shopping event, after all. “OK, we’ll take this, that and the shrug,” said Michelle Bergeron McMaster, pulling a blush-colored tulle pouf off her daughter. “The shrug — I’m obsessed.” She wasn’t the only one; there were just two of them left with a half hour of shopping to go. At $645, it was reasonably priced, relatively speaking. “I’m thinking of trying to squeeze myself into the size 10,” said one adult of a black, tiered ruffle skirt. Indeed, between the designer-level quality — all the clothes are done in the same materials used in the main collection — and price tags, one almost forgot it was a children’s line.

Almost. “We have a diaper kit in the back,” said a member of the Lanvin staff. “Just in case.”