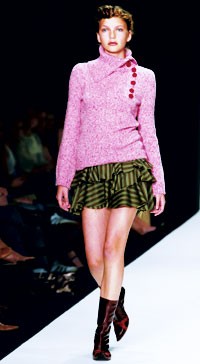 Jenni Kayne: In a world that moves at warp speed, it should come as no surprise that 21-year-old Jenni Kayne can go from the promising freshman collection she showed only a year ago to a third season filled with beautiful clothes. And the presentation certainly attracted a crowd, as the front row looked like a “Tonight Show” lineup: Owen Wilson, Jared Leto, Lara Flynn Boyle, Dustin Hoffman and Farrah Fawcett. But once the lights dimmed, all eyes focused on Kayne’s most evolved collection so far, which featured more grown-up, luxe looks. There were metallic-threaded, pinstriped tailored suits and tweed capes, shirred satin cocktail dresses, shiny silver-sequined skirts in varying lengths and a shimmery floor-length, synthetic astrakhan coat. It’s clear that Kayne was moving beyond her girlish whims. There were a few missteps, however, such as the unfortunate flocked-and-gilded floral prints and some navy-inspired sportswear that came from out of left field. But experience — and a good edit — can do wonders for a fledgling talent, and Kayne has time and a booming business on her side.

Mason: Nice and easy was the modus operandi at Mason, where romantic prints, relaxed sweaters and tailored pants made a girl wish for the bundle-up days of fall. Designer Michelle Mason’s secondary line was a breezy departure from the artsy elements found in her fall signature line, which she showed Saturday night. Instead, these clothes celebrated the art of simple girlish dressing. The Edwardian silhouettes she favors were all in place, but were used sparingly, as in a dotted corduroy blazer or a fantastic group of very high turtleneck blouses printed with blue cornflowers. The collection is certainly destined for wide exposure with its whispery cashmere tops, skinny wool pants and chunky cardigans great for blustery beach getaways.

Pegah Anvarian: For her second runway show, Pegah Anvarian tested new territory, attempting to go beyond her trademark cashmere jersey looks. But it didn’t quite work. Her structured silhouettes in black leather, wool and satin appeared stiff and out of place in a collection that overall tried to emphasize slinky sexuality and sensual lines. The pencil skirt, tube minidress and biker-styled jackets, for example, seemed a stale imitation of the looks in the “Addicted to Love” video with its stark, in-your-face sexuality. But where her new direction did work was with filmy, silk jersey dresses that featured sparkling, jeweled necklines — pieces that emphasized her draping talents. This small but glamorous sampling left one wishing she had focused more of her energy in this direction. Anvarian also offered some signature looks, such as the plunging neckline dresses, halters and drop-waisted tops paired with extra-long leggings that were ruched at the ankles like legwarmers.

Rami Kashou: There’s no doubt that Rami Kashou adores women. He has wrapped and draped his earthy goddesses in intricately braided and ruched jersey, and has sealed a fan base despite the fact that his clothes are hard to come by because of frequent production difficulties. Striving to become more commercial, however, Kashou returned after a season’s absence with constructed jackets, wool gauchos and ruffled dresses — all to uneven effect. A fuzzy black fabric cut into a flounced jacket looked cheap, and the sharp shift from several edgy sparkling copper smocks to pretty lime rayon cocktail dresses was jarring. Kashou’s strength definitely lies in his manipulation of jersey — whether it’s wool, silk or rayon — as evidenced by the gorgeous separates and red carpet-ready gowns he sent out.