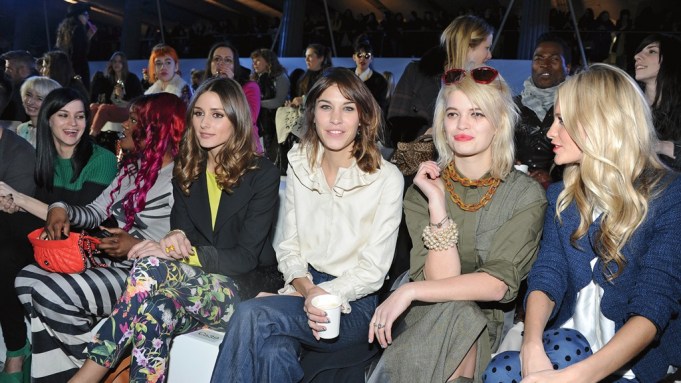 It’s a London Moment. A rush of international attention is focused on the city. After being the hub of global fixation on the royal wedding last year, the obsession with Kate Middleton has not let up — with all eyes on her style and rumors about a royal pregnancy popping up regularly. The festivities continue as the nation prepares for massive celebrations around Queen Elizabeth’s Diamond Jubilee in June and the Summer Olympics in July and August. Even if the publicity hasn’t all been good — e.g., the Murdoch phone-hacking scandal — London seems to be on everyone’s lips. And fashion has been along for the ride, with a renewed interest in the London runways drawing editors and retailers back to the city.

The kickoff for all this fanfare can be pinned, more or less, to September 2006. Not everyone was thrilled when Giorgio Armani showed his spring Emporio Armani collection during London Fashion Week. It was a made- for-TV extravaganza at Earls Court that featured performances by Beyoncé, Bryan Ferry, Razorlight and 50 Cent in aid of (Product) Red, which helps to fight disease in Africa.

Before the event, naysayers complained the Armani machine would dominate the week and distract from emerging talent at Fashion Week. To a large extent that happened, but Armani’s arrival turned out to be a turning point. Before then, London was usually the victim of talent drain: Once designers started getting press and buyers’ attention, they’d be snapped up by a big European brand or start showing their collections in Paris, Milan and New York, where the money was. Over the years, the London runways lost Vivienne Westwood, John Galliano, Alexander McQueen, Stella McCartney and Gareth Pugh, to name just a few, while others transferred to Milan to work for Gucci, Giorgio Armani or Prada. The less fortunate, unable to keep their businesses afloat, shut up shop. With its high cost of living, small and expensive manufacturing base and lack of commercial savvy, London was, with few exceptions, a nonstarter for any designer seriously looking to build a business or forge a fashion career.

“Everyone would come here looking for ideas, but no one would buy anything. London was not a business opportunity,” says Ed Burstell, managing director at Liberty, who, in his roles at Henri Bendel and Bergdorf Goodman, has been a regular at London Fashion Week for the past 20 years. “Over the years, there has been some amazing talent coming out of London — Emma Cook, Luella Bartley, Hamish Morrow, Preen and Sophia Kokosalaki — but they weren’t grounded in business.”

London’s fashion fortunes have changed, though, for myriad reasons. The British Fashion Council, which runs London Fashion Week, has become far more business-minded, while newly high-profile Britons have thrown their weight behind the industry, showcasing British designs on the world stage. For the first time, Britain has a fashion-minded first lady in Samantha Cameron, an art school graduate, former creative director of the luxury stationers Smythson and a fan of such labels as Erdem, Emilia Wickstead and Christopher Kane. Cameron is also an official ambassador for the BFC, sitting front row at numerous fashion shows and hosting zingy cocktail parties at Number 10 Downing Street, the British prime minister’s official London residence, for designers and industry players. In a city battered by the phone-hacking newspaper scandal and the riots last summer, fashion has become a high- profile, feel-good story; a source of job opportunities, and a major showcase for British creativity.

Not long after Cameron began flying her fashion flag, another stylish woman burst into the spotlight: Middleton, now Duchess of Cambridge. The duchess is trying hard not to be seen as a designer clotheshorse — like her husband’s mother, the late Princess Diana — and instead has become a walking advertisement for British high-street fashion, regularly donning dresses by Reiss, shoes and clothes by L.K. Bennett and jewelry by Links of London. She creates a retail frenzy with women the world over rushing to replicate her look — and giving a much-needed boost to high-street fashion retailers, who have been struggling with sluggish consumer spending. But the duchess doesn’t exactly shun high- end labels: She also wears Burberry, Emilia Wickstead, Katherine Hooker and Alexander McQueen, whose creative director Sarah Burton famously made her wedding gown.

The rise of the fashion-minded Cameron and Middleton has neatly coincided with the growing momentum behind London’s design pack. In 2005, Hilary Riva, a sharp businesswoman who’d made millions of pounds in her long career managing, buying and selling high- street companies, took over as chief executive officer of the BFC. She made sales and profits a priority, and set out to attract British — and foreign — talent to London Fashion Week. Less than a year after her appointment, Riva welcomed Armani and his entourage to the British capital, and by the 25th anniversary of London Fashion Week in 2009, she and her team at the BFC had managed to woo labels including Burberry, Matthew Williamson and Antonio Berardi back from the catwalks of Milan and New York.

The BFC — now run by an equally sharp marketer and public relations expert, Caroline Rush — continues to use government funds to help pay expenses for foreign press and buyers, and back awards, sponsorships, mentoring and marketing schemes — such as London Show Rooms, which takes designers’ collections to cities worldwide — with the aim of helping the talent turn a profit. As designers started thinking more commercially, perfecting their fits, finishes and deliveries, more international buyers and press started attending the shows. Between September 2006 and September 2011 (the latest figures available), London Fashion Week saw a 52 percent increase in attendance, according to the BFC.

Today, local talent is no longer forced to leave London. The BFC estimates that more than 100 million pounds, or $159 million, worth of orders is placed each season, with three-quarters of that money coming from abroad.

The industry contributes about 21 billion pounds, or $33.4 billion, to the U.K. economy—twice as much as the publishing or automobile industries.

And there’s a growth story: Over the summer, the British Fashion Council will launch a twice-yearly men’s fashion week, with design houses including Hardy Amies, E. Tautz and J.W. Anderson showing.

Meanwhile, the Queen’s Jubilee and the Summer Olympics are expected to be a boon to fashion and luxury retailers. Nearly 60 percent of British luxury brands are expecting the Jubilee to have a positive impact on their sales, while 20 percent say the Olympics will drive a “double-digit increase” in sales, according to the Walpole & Ledbury 2012 U.K. Luxury Benchmark Study.

The study, which included feedback from such brands as Burberry, Mulberry and Jimmy Choo, also revealed that the British luxury industry is expected to grow 8.5 percent this year, and overall, it is on target to achieve forecasts of 9.1 billion pounds, or $14.6 billion, by 2015.

February’s London Fashion Week harnessed that feel-good mood, drawing a host of new local and foreign talent to the shows. Moschino Cheap and Chic, Belstaff and McQ were among houses moving or launching collections in the city. During the week, Tom Ford showed fall, and Stella McCartney celebrated her role designing the uniforms for Britain’s Olympic athletes with a black-tie dinner and eveningwear presentation. It all had buyers and press alike buzzing about the week.

“London works. Talented people don’t have to go to Paris and New York to become designers anymore,” says Elizabeth Saltzman, an American freelance fashion consultant and stylist based in London. “The city is now synonymous with cool — but grown-up — edginess, and clothing that is intensely wearable.”

Colleen Sherin, senior fashion director at Saks Fifth Avenue, says the store, which does a brisk business with such labels as Erdem, Peter Pilotto, Burberry Prorsum and Thomas Tait, comes to London seeking innovation and print development: “Attitude and edge.”

Suzanne Timmins, fashion director of Hudson’s Bay Co., says the energy reminds her of Eighties London, with one major difference: quality. “In the past, you’d think, I love this, but is it luxurious enough?” The quality in London was lacking, says Timmins, who showcases London designers in The Room, the store’s avant-garde luxury space with labels like Kane, Erdem, Saunders, Giles, Marios Schwab and Katrantzou. “Now you can hold these collections up against any luxe brand in Paris and Milan.”

Giles Deacon agrees. “Regardless of the size of your business, you’re still competing with Gucci and Prada — without the ad budget — so the product has to be just as good, if not better.”

And the factories themselves are collaborating closer with fashion houses to make a better product. Tom and Ruth Chapman, owners of specialty chain Matches, source their in-house line Freda entirely in the U.K. Says Ruth, “We work a lot with small factories in East London. British factories really want to do a good job: They’re open to creativity, new ideas.”

New media has also boosted the profile of London’s designers, who can now communicate directly with global audiences via the Web, bloggers, live-streaming, social networking and Twitter, instead of relying on press and buyers to hop a plane to Heathrow.

Despite these strides, London still faces challenges. In February, a BFC report, “Future of Fashion: Strategic Considerations for Growth,” pointed to the need for increased business support for rising designers, tighter bonds between them and local manufacturers, and the grooming of future fashion business managers. If those managers do emerge — and throw their weight behind the design talent — London may feel a little less threatened the next time Armani comes to town.