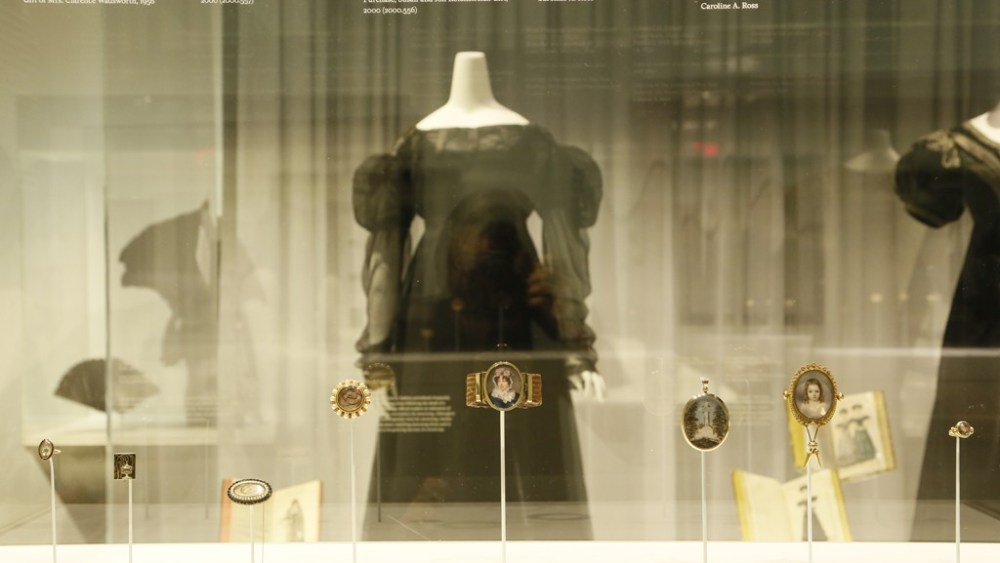 NEW YORK — How should the grieving dress? The question still resonates today, though there is no longer a societal pressure to conform to sartorial codes, the color black being the sole exception, perhaps.

“Death Becomes Her: A Century of Mourning Attire,” the fall Costume Institute exhibition at The Metropolitan Museum of Art, which opens to the public on Tuesday, is a powerful reminder of how, during much of the 19th century, the mourner’s wardrobe was distinctly defined, and how it evolved at various stages of grief.

The show is arranged chronologically from 1815 through 1915, with about 30 looks, two of which are men’s-specific and one is for a little girl. The theme may come off as a little morbid, but far from sad. Instead, it’s a study of a past ritual that was mainly expressed via fabrics, i.e., matte right after the death of a beloved, with a gradual introduction of color, pattern and even shine as the mourner works through the grief.

“Very shiny fabrics were not considered appropriate for mourning in the early stages,” noted assistant curator Jessica Regan. “In later stages of mourning, one could reintroduce more lustrous textiles like taffetas and moiré.”

Most of the garments on show are in crepe, a crinkled silk gauze mourning textile popular during the time span the exhibition covers. “It was a very expensive process to go through,” said curator-in-charge Harold Koda. “Even people who were working class aspired to this whole ritual, so there was this subordinate industry of dyers, who dyed your [existing] clothes into black. There are different levels of the quality of the black dye.”

Early stages of mourning could also feature a crepe trim. One look on display was actually a wedding dress, designed to reflect half-mourning in honor of those lost during the Civil War. The exhibition also features several “half-mourning ensembles” that were appropriate toward the end of the grief-stricken period, and introduced white, shades of gray and mauve into one’s attire.

The mourning industry came into its own in the 1840s, with stores developed solely for the purpose of selling mourning textiles and accoutrements like bonnets, shawls, veils and gloves.

“One of the things that we are hoping for with the exhibition is that this is an opportunity to show how 19th-century high-fashion evolution overlaid with an important social condition, a protocol for ritualizing social interactions,” Koda noted. “It’s both a cultural phenomenon as well as purely a fashion phenomenon.”

Indeed, by the 1870s, high fashion more visibly entered the mourner’s wardrobe, one such example at the show being a dress ensconced in crepe molded into pleats and trumpet shapes that form at the hem.

It wouldn’t be a show on mourning if there wasn’t a nod to Queen Victoria, the perpetual widow if there ever was one. Her attire is juxtaposed with two glittering 1901 paillette creations from Queen Alexandra, just as she was mourning her mother-in-law, Victoria, and signaling a new age of British monarchy.

“A lot of people think that because Queen Victoria was widowed and she was very visible through official photographs, that she really defined standards of mourning,” Regan noted. “But really, by this period [the 1860s], they were firmly established, and even by the 1830s, many of her middle-class subjects were already clamoring to conform to these formal standards of mourning.”

The jewelry is particularly noteworthy, ranging from fans and parasols to a carved jet 1860 necklace and several lockets featuring enameled images of the deceased and even some of their hair. Charles Dana Gibson illustrations from Life magazine about a very young, attractive widow as she emerges from mourning and is beset by suitors add a whimsical touch to a subject that isn’t funny.

The soundtrack is Gabriel Fauré’s “Requiem.” “We wanted something that was not too somber,” Koda said. “The nice thing about the Fauré requiem is that it’s not a celebration of death, but an acceptance of death as a spiritual release.”

It marks the Costume Institute’s first fall exhibition in seven years, and will be on view at the Anna Wintour Costume Center through Feb. 1.

The impact: a reminder of how fashionable mourning once was, and how that’s been lost with time. “Don’t wear T-shirts to funerals, that’s our message,” Koda mused. “It’s about memorializing. Of course, some of it is sad, but a really important element to mourning dress is the signification that you are remembering someone.”