A Looney Time for T-Shirts

Bugs Bunny, Daffy Duck and Wonder Woman are among the cast of characters at Warner Bros. with a new starring role - fashion icons. 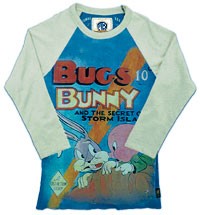 LOS ANGELES — Bugs Bunny, Daffy Duck and Wonder Woman are among the cast of characters at Warner Bros. with a new starring role — fashion icons.

The studio’s consumer products’ division has signed a licensing deal with of-the-moment contemporary brand, Trunk Ltd., known for its vintage rocker T-shirts. The agreement comes on the webbed-foot heels of Warner’s licensing arrangement with Raw 7 cashmere knits, which began shipping to stores this month.

The upmarket apparel licenses mark a first for Warner Bros., which hopes to court the price-insensitive consumer who is smitten by the intersection of trendy clothing and nostalgic themes.

“This new grouping of higher-end licenses is part of a new strategy we’re pursuing…because there is an appetite and consumer demand,” said Karine Joret, senior vice president of worldwide communications at Warner Bros. Consumer Products.

The demand has been stoked and fed for the last two years by character legends such as Mickey Mouse and his friends in partnership with Jackie Brander, owner of Fred Segal Fun in Santa Monica, Calif., and designer Ashley O’Rourke, who researched the archives of the Walt Disney Co. to create a contemporary line of clothing. Jem Sportswear, an apparel manufacturer, has also stepped up to the character plate, striking deals with Disney, Peanuts and Barbie for vintage T-shirts crafted with embellishments, embroidery and ultrasoft fabrics.

Joret got a solid read on the market last year through design partnerships she entered with high-profile boutiques and their owners, Tracey Ross in West Hollywood and Scoop, co-owned by Stefani Greenfield, in New York. The stores carried vintage character T-shirts in distressed fabrications.

“We collaborated closely with the two of them, and the ventures have proven very successful,” Joret said.

They also helped open the doors to the two newer deals, exposing Warner Bros. to the brands.

In slightly more than a year, Trunk has grown to an almost $5 million maker of limited-edition retro rock T-shirts because of its stable of 40 licensed music properties, which include the Beatles, Black Sabbath, KISS, Ozzy Osbourne, the Doors, Billy Idol and Madonna. In its deal with Warner Bros., Trunk will produce exclusive limited tops, jackets and headwear for fall 2005 incorporating characters from Looney Tunes dating to the Thirties, Hanna-Barbera (“The Flintstones” and “The Jetsons”) and DC Comics (“Batman” and “Superman”).

Shipping to stores in July and August, the line will initially offer knitwear in crewnecks and raglan styles, some in tie-dyed looks, featuring Trunk’s signature side-stitching and story segments written inside the shirt. Looks will range from Snagglepuss in happy repose on a tie-dyed crewneck or a frightened-looking Bugs Bunny and Porky Pig hanging on for dear life in a stormy situation on a raglan. But Trunk won’t be posing Tweety Bird with Jim Morrison anytime soon. The apparel is strictly about Warner Bros. characters, even including the WB shield on the hangtag.

“This was a natural opportunity for us because we work with timeless characters, and when is Bugs going out of business?” remarked Brad Beckerman, chief executive officer of CINQ Group, a Santa Monica, Calif.-based brand development firm and parent of Trunk, who expects first-year sales of the line to reach $1 million. Wholesale prices range from $30 to $50 and plans call for adding denim jeans and track jackets in the future.

Warner’s will go even more luxe with Raw 7, creating designs with zip-up cashmere sweaters, polo and cotton T-shirts and thermals showcasing Looney Tunes and DC Comics characters. Raw 7 has mushroomed into a $16 million company in two years, selling cashmere sweaters, polo shirts and T-shirts designed with tattoo motifs that are handprinted, hand-painted and discharged for a three-dimensional effect.

Its first Warner Bros. collection, hitting stores now, follows a “love amour” theme, including the love-struck skunk Pepe Le Pew embracing a terrified Penelope, and Daffy Duck adoring himself in front of mirrors. For fall, the looks, consisting of as many as 100 pieces, will include a panic-stricken Tweety in the clutches of Sylvester on a V-neck sweater and a zip-up sweater with an argyle background, and Sylvester strategically placed on the front and bottom back. Wholesale prices range from $40 for tanks to $140 for cashmere sweaters. First-year sales from the Warner Bros. partnership are anticipated to fetch $2.5 million.

“This is a mutually beneficial partnership, giving us a chance to apply our techniques to new artwork,” said Ofer Ashkenazy, a partner at Raw 7, a division of D.P. Textile and Apparel Inc. Raw 7, which attended MAGIC International this week, is also partnering with Ryan Seacrest, the radio personality who is featured on “American Idol,” for his line of clothing.

The built-in retail distribution offered by Trunk and Raw 7 appealed to Warner Bros. The pair already court desirable retailers, such as Ron Herman and Kitson in Los Angeles, Blue Bee in Santa Barbara, Calif., and Atrium in New York.

Scoop’s Greenfield said she plans to carry both lines based on the quality of the lines.

“Characters are what first get the customers’ attention, but ultimately it’s about the product, and these are well-established brands that know how to produce well-made clothing,” she said.