Giving the guys a dose of sex. 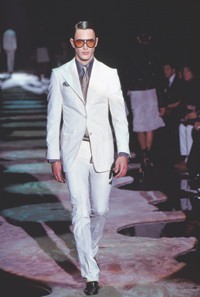 Before the devil wore Prada, lobbyists in Washington had a “Showdown in Gucci Gulch.”

There are no witchy fashion editors in this nonfiction work. The book by Alan Murray and Jeffrey Birnbaum documents the 1986 battle in Congress over new tax legislation. Its sly title refers to the footwear of choice of the law’s opposing lobbyists who would gather in the halls of Capitol Hill.

Possibly more so than any article in a man’s wardrobe, the Gucci moccasin has consistently represented power through understatement. It’s the pillar in Gucci’s stable of iconic pieces and put the brand on the radar of the world’s elite.

“In Italy, above any place else, Gucci [as a men’s brand] was considered a grand company — traditional and storied,” said Anna Dello Russo, L’Uomo Vogue’s outgoing editor in chief. “And the Gucci moccasin was the most emblematic product of that image.”

Aldo Gucci, a shrewd marketer, knew the brand had the cachet to carry more than just leather horse bit loafers, and soon after a successful foray into women’s silk scarves in the late Fifties, he added men’s ties. “To be honest, when we started the ties, we considered them a joke,” he told WWD in 1969. “But it was another great success.”

Wildly diverse men donned Gucci shoes and neckwear alike, but it wasn’t until the late Seventies that they could start slipping into Gucci clothes.

A series of anonymous designers crafted the collection around classic clothing. That all changed when Tom Ford took the staid out and put the sex in.

From his first collection for fall 1995, the Texan helmed a revolution and designed the Gucci man in his sophisticated and suave vein. Whether it was skinny Mod trousers, silk cowboy shirts, oversized bohemian shearlings or slim, taut pinstripe suits, Ford created a sexual undercurrent that pulsed through every collection.

“Tom Ford created the Gucci man and that man was a playboy and sexy,” said Dello Russo. “This man enjoyed everything about life. He sought pleasure.”

The pleasure factor reached a crescendo at Ford’s final men’s runway show in January 2004. He sent models out in silk briefs holding tumblers of Scotch in their hands and put girls in sequined thongs, who swayed on raised runway poles. It was a scintillating, steamy show, and it underscored what Ford had unabashedly promoted throughout his career: sex — raw, real and in your face.

The Scotsman was a seasoned designer, but the transition to men’s creative director ultimately proved too difficult.

In January, Ray stepped down and Frida Giannini took over. She presents her first men’s collection this month in Milan.

Now Gucci chief executive Mark Lee is developing the men’s apparel business, which he described as stagnant over the last few years. “With men’s we’re really at the beginning,” Lee said recently. “There’s a lot of growth potential.” Men’s wear currently represents 5 percent of Gucci revenue, or approximately 90 million euros, or $115.5 million at current exchange. Lee is counting on Giannini to drive growth and introduce more commercial apparel categories into the collection. She will be the third person to design men’s in six seasons, yet industry insiders are hopeful the brand can withstand another change.

“The Gucci point of view for every item is comprehensive and cohesive,” Kalenderian said. “Gucci is prestige, but it’s also contemporary and satisfies the expectations of sophisticated consumers.”