Most stars opted for chatting amongst themselves as they waited in line to be photographed. 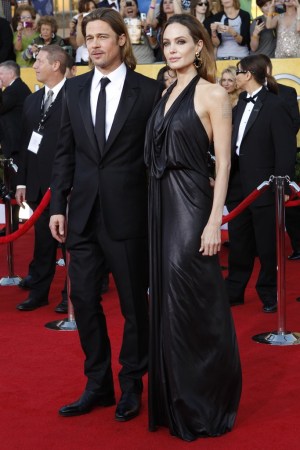 “As actors, we have a special place in our hearts for the SAG Awards,” said Angelina Jolie as she walked the red carpet at Sunday’s 18th Annual Screen Actors Guild Awards. Unfortunately, the staffers at Los Angeles’ Shrine Auditorium didn’t have their designer playbooks memorized. “Angelina is wearing Jenny Beckham,” a volunteer told reporters in an attempt to be helpful. Jolie was in Jenny Packham. She was one of the few actresses who didn’t skip talking to reporters altogether. Most stars opted for chatting among themselves as they waited in line to be photographed. Jesse Tyler Ferguson grabbed Sofia Vergara’s behind, and John Krasinski gave Guy Pearce a bear hug, while his “The Office” co-star B.J. Novak stopped for interviews, though he wasn’t much help when it came to fashion. “I don’t know who makes my tux, but I’ve actually worn this to the last six award shows I’ve been to, and nobody’s ever asked.” Apart from jewel tones (Emily Blunt’s Oscar de la Renta and Jessica Chastain’s Calvin Klein Collection), the other trend appeared to be white (Viola Davis, Tilda Swinton, Rose Byrne and Zoe Saldana). Ashlee Simpson, who came to support boyfriend Vincent Piazza of “Boardwalk Empire,” voiced the eternal question of red-carpet season: “How do you avoid people stepping on your train?”