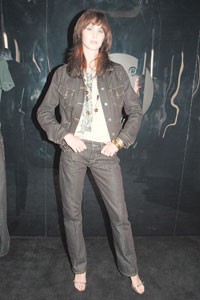 BARCELONA — It’s time for denim to face the music — rock ‘n’ roll, specifically, with perhaps a pinch of pop.

Fall and winter styles inspired by a blend of these two music forms were a prominent theme among exhibitors at the Bread & Butter trade show here last week, where new niche brands took a backseat to fresh offerings from reinvigorated denim giants. Guitar-based music replaced the thumping dance club beat that typically booms from the show’s speakers.

The show was awash with skinny fits, from ultratight styles that evoked bands from the Seventies and Eighties to variations with looser seats or cropped ankles. Loose fits with slightly slimmer legs, clean washes, dark denim and higher-waist lines will be the saving grace for those with shapes that don’t accommodate the sprayed-on denim look.

For the second Spanish edition of Bread & Butter, which ended its three-day run here Jan. 21, exhibitors and buyers said denim would remain a staple for next winter despite the dearth of new names. Visitors reported sales on the rise and said they were increasing budgets by as much as 20 percent. Bread & Butter organizers said 48,800 buyers visited, up 8.4 percent from the July session.

“Trends in fashion change, but everyone will always have jeans in their closets,” said Citadium’s Dumont.

Yet buyers agreed that niche premium brands were much less of a presence.

“Niche brands have had their heyday,” said Jack Jay, director of Los Angeles buying agency I.B.S. Corp., who noted he would increase his budget by about 8 percent.

Jay predicted dark denim tones and stripes would be popular next winter. Among brands offering those looks were London’s Firetrap, which will launch a pinstripe denim collection next winter.

Denim giants overshadowed the new niche names at the show. G-Star, for example, unveiled its Elwood 10 jeans. The collection features raw denim, three-dimensional form and pockets sporting the number 96 in honor of the brand’s launch date. The collection will be available in stores in July.

At Basel, Switzerland-based Edwin, a new premium denim line dubbed Roxury is a mélange of luxury high-end denim with a touch of rock. The line retails for between 109 euros and 159 euros, or $133 to $195 at current exchange.

“The major denim brands are all coming out with premium denim lines, many based on dark tones and raw denim that are well finished,” said Miky Glupczynski, owner of Up & Wear, a high-end denim boutique in Brussels.

Glupczynski, who increased his budget by almost 20 percent, said he noticed a plethora of brands offering embroidered pieces, studs and vintage denim. He said Vintage China, a Los Angeles denim brand that features novelty styles designed in China with vintage denim, was an eye-catcher at the show. Glupczynski even launched his own vintage denim brand at Bread & Butter, dubbed R:Cycle, which features denim shirts and skirts made from Levi’s vintage 501 jeans.

At Levi’s Europe, the new fall introduction is its Engineered line of high-end denim for women and men with sharp cuts and an unwashed finish. The company also unveiled a prototype jean that will accommodate an iPod music player.

“Today, customers want individuality. They are tired of the cookie-cutter approach and they are looking for the handcrafted feel,” said Kenny Wilson, Levi’s senior vice president of European commercial operations.

Wilson showed off the line’s hammered buttons and uneven stitching. Comfort is also key when it comes to new directions in denim, Wilson said.

“Young professionals are working and traveling in denim. They want more ergonomic forms,” he said, demonstrating the three-dimensional property of the Engineered line. “You can’t lay it flat on the floor.”

At Denim Bird’s, the women’s line by Sweden’s Nudie jeans, even the tightest jeans have a stretch factor to make them more wearable, said Palle Sternberg, co-founder of the label, which plans to open its first store in Amsterdam in July.

Unwashed jeans were a direction at many booths, including at Italy’s Replay. A tag reading “worn not washed” was added to Replay’s labels for next winter.

“Denim is getting cleaner and blues are less washed for a time-aged look that appeals to customers for its authentic approach to denim,” said Marco Bortoletti, managing director of Replay.

Bortoletti expects its new array of black denim, ranging from 139 euros to 159 euros, or $170 to $195, as well as cropped denim looks, to be next winter’s highlights.

Ecology-conscious denim was an underlining theme at the show. “Focus on the environment is more of a niche trend, but it will gain importance in the next five years,” said Levi’s Wilson. Brands like France’s Misericordia and the Netherlands’ Kuyichi positioned themselves among the pioneers of organic denim labels.

“With the massive production forces working behind us, it facilitates our relationship to the final product,” said Serdar Mazmanoglu, president of Mavi Jeans in Europe.