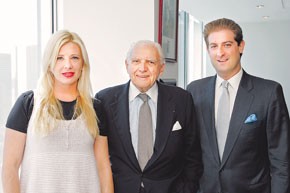 NEW YORK — Rachel Roy is ready to step on the accelerator — with the help of recently formed TSM Capital.

“The fact that I have found people I really enjoy working with is so important when you’re going to be making creative as well as long-term decisions,” Roy said Monday.

“It’s expanding the brand and building it into something I wouldn’t be able to do on my own because funds wouldn’t have come as quickly,” she added.

Roy made a name for herself not just as the wife of hip-hop and urban clothing impresario Damon Dash, but also with her feminine, romantic clothes designed for women like herself. She and her husband are actively involved in New York’s social circuit, and Roy is often photographed wearing her own designs.

A California native, Roy joined Rocawear fresh out of college. She rose to become creative director of Rocawear women’s and children’s lines, and met her future husband there. While at Rocawear, she launched her own label in 2004 and quickly caught the attention of stores like Bergdorf Goodman and Big Drop with beaded tops and shrunken blazers and miniskirts.

When she and Dash left Rocawear in 2005, they retained ownership of Roy’s business. The collection was initially launched as a contemporary line, but Roy changed tiers last year and turned it into a young designer line, which included stepping up price points by about 40 percent.

The company has its own sample room in New York, and most of the garments are made in the U.S.

Roy’s label is now carried in over 100 doors, including Bergdorf Goodman, Saks Fifth Avenue, Neiman Marcus and Nordstrom as well as specialty boutiques like Intermix here, Mitchells in Westport, Conn., Marissa Collections in Naples, Fla., and Aura in Santa Monica, Calif. She also has small distribution overseas in stores such as Villa Moda in Kuwait and Tsum in Moscow.

TSM Capital’s mission is to invest in designer businesses, brands and retailers in the early stages of their companies, with revenues of between $5 million and $50 million. In August, the trio involved in the investment firm said they aimed to build a portfolio of up to 10 businesses over the next three years.

“She [Roy] meets all of our criteria,” Traub said. “She is an emerging talent, has a strong management team, global potential and we believe the brand can be rolled out.”

In common with many smaller designers, Roy has been looking for additional funding for some time. Magnusdottir, who serves as TSM Capital’s managing director, explained the designer came to their attention several months ago through some acquaintances in the fashion industry.

“We took some time to really get to know the brand and the management team and do our due diligence,” Magnusdottir said. “Both sides felt there was a good fit, and a good working relationship. They feel we can add value strategically and in terms of relationships.”

Magnusdottir added that Roy was “extraordinarily talented, charming and a wonderful person,” and lauded her management team, particularly Marianne Tesler, Givenchy’s former president who is chief executive officer of Rachel Roy, and Walter Price, who is the company’s chief financial officer, and was previously cfo of Givenchy’s U.S. division.

“She is really only in her second year as a designer brand, and we felt she has achieved a great distribution and great brand recognition within a very short period of time,” Magnusdottir said. “They have primarily focused on the American market so far, so there’s a lot of growth potential internationally.”

In addition, TSM Capital saw the potential to extend Roy’s label into other product categories, including accessories and fragrance categories.

“We think over time, she can build a successful licensing business,” said Magnusdottir, who will join the board of Rachel Roy Fashions alongside Roy and Tesler. “We will start meeting with potential license partners but we want to do that in a careful way. We want to meet with the leading players and carefully negotiate the best deals for the brand.”

Traub said that Roy is “anxious at some point to do a second line at better prices.”

As for international growth, Magnusdottir said that TSM Capital has strong relationships in markets like Russia, the Middle East, Greece and Turkey.

“Rachel is half-Indian, and India is a market that is experiencing huge growth in the luxury market,” she said. “We see India as a market for Rachel in the future.”

Traub added, “We also believe there is potential for our own retail here. The way TSM works, when we invest, we work closely with the management on helping to build the brand. We do our business plan for the retail, help with locations and the strategy for the first store and future stores.”

Traub noted a first site has been singled out, but remained tight-lipped as to its location. Roy is said to be looking at a unit at the Plaza here. Tesler said she envisions the first two stores opening in New York and Los Angeles.

Roy said she asked herself several questions to determine whether TSM Capital was the right partner for her.

“‘Do they like the aesthetic of the clothing?” she said. “Do they like the story that is me, and that I am trying to build the brand on? Is there anything there that is authentic and real and that builds into how can we work together? It’s a simple basis.”

Roy hopes to build a strong internal structure to create a foundation for the multiple categories she anticipates to launch. “I personally like accessories, and I love children’s clothing,” said Roy, who has a daughter and is currently expecting another child. “I don’t know how soon children’s would be on our horizon. I have designed it before and it’s something I’d love to do.”

Opening her own boutiques, she added, will help stores see how she likes to merchandise her categories together.

All parties involved declined to comment on the size of the stake or the sales volume of Rachel Roy. Tesler confirmed TSM Capital has taken a minority stake, adding, however, that it was “significant.” She declined to reveal the exact percentage.

Sources estimated Rachel Roy’s wholesale volume at about $10 million, with a growth potential of up to $100 million.

TSM Capital is not working with a partner on this acquisition.

“They bring a wealth of experience in fashion, retail and in upscale brands,” Tesler said. “To have partners who can bring their international expertise, and their relationships with retail and other categories like accessories and jewelry…facilitates your work. It’s also always nice when you work to have someone with whom you speak the same language.”

As for her husband, Damon Dash, Roy said, “He has worked so hard, and he has supported me from the very beginning when things didn’t look quite as bright. It takes someone who believes in you, sometimes more than you believe in yourself.”