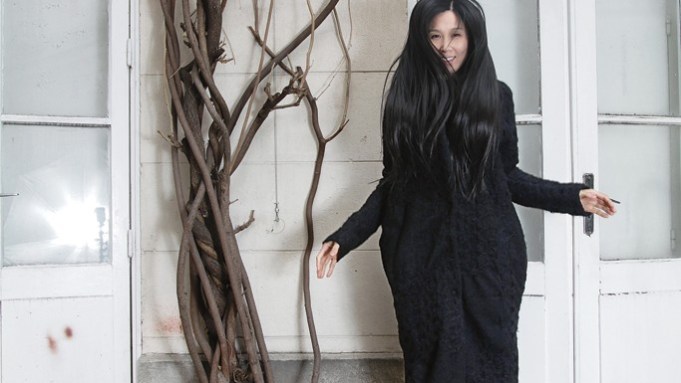 On a gray Saturday afternoon in early March, Uma Wang was in her sliver of a Paris showroom on Rue Sainte-Anastase in the Marais, working as designer, sales agent and model, as she tried on a long black coat for a pair of Australian buyers. Everything in the room, from the clothes on the racks to the clothes on Wang’s back, was black, with two exceptions: the designer’s jolting, size 41 men’s oxfords, and a crimson velvet dress that hung in the window. “We don’t really use red, but everyone thinks it’s a beautiful color,” says Wang. “It’s also very Chinese.”

The same can be said for the 39-year-old Wang, who, unlike Vera Wang and Alexander Wang, is actually from and still lives in China. She grew up in a family of doctors in the northern Mainland before moving to Shanghai to study fashion—knitwear, specifically—18 years ago. Wang is one of the few Chinese designers to gain notice on the high-end international fashion circuit, showing her fall collection, her first solo runway show, in front of an audience of 700 during Milan Fashion Week. Wang has also been taken into the Vogue incubator, with supporters in Angelica Cheung of Vogue China, Franca Sozzani of Vogue Italia and Anna Wintour. Beginning in May, Wang will be in New York as part of a CFDA/Vogue Fashion Fund exchange program, wherein she will spend time learning the American fashion system, while Lazaro Hernandez and Jack McCollough of Proenza Schouler do the same in Shanghai.

It’s a big moment for Wang, who launched her collection in 2005 after making the bold decision to leave her cushy gig as head designer of a local Chinese label to study at Central Saint Martins. “It was so boring,” says Wang of that first design job. “It was too normal. Not exciting. I wanted to get out of China for some fresh air, to see something new.” She’s well aware that the tables have turned, with China finding a captive audience in the West, the fashion industry especially. It’s a fact that Wang credits, at least partially, for the sudden uptick in interest in her line.

“Everything came together,” she says. “China became really popular. People want to see not only the market, but they really want to know about it.”

A show of nationalist pride is not why Wang chose to buck her own proclivity for a dark palette—Yohji Yamamoto is a major influence—by putting red in her fall collection. Rather, a spring collaboration with Swatch was the genesis of the crimson dress, designed to color-coordinate with one of the watches. Such pragmatic measures are becoming increasingly important to Wang as she tries to build her international business. Her clothes are carried in 15 stores globally (including Vertice London, DAAD Dantone in Milan, A Piedi Nudi nel Parco in Florence), though she has yet to break into the U.S. “It’s not only creativity,” notes Wang. “You have to be balanced. With no money, you cannot do anything.”