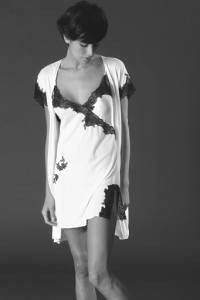 A purchase price was not available, but industry sources estimate the acquisition of the 12-year-old Salon was around $800,000. Messe Frankfurt also produces the Intima trade shows in Miami, São Paulo, Brazil, and Tokyo.

The consolidation of the Salon with the Messe Frankfurt operation is expected to compete with Lingerie Americas, the French-owned-and-managed intimate apparel trade show that made its debut here in August. The next Lingerie Americas edition here is scheduled in March.

The November and March editions of Salon will continue to be staged at The Millennium Hotel in Manhattan. In August 2003, Salon will be moved to the North Pavilion of the Jacob C. Javits Convention Center and will be cobranded with Messe Frankfurt’s Intima America logo.

The new, larger presentation will feature on-the-floor fashion shows, as well as several events. There will be an expanded swimwear segment from the Intima venue with fashion shows. The combined trade show format is expected to draw more than 225 exhibitors from 13 countries.

Regarding her plans, Bigman said, “I will continue to be very involved with the Intimate Apparel Salon and will play an active role at the shows. This move will give the Salon access to a lot more resources and will give us an opportunity to have a worldwide presence.

“Now is the time to move into a strong partnership that will enable the shows to grow and reach a new level. We expect to see a significant increase in domestic and international participation, providing the industry with a needed, cost-effective platform in New York.”

Roland Bleinroth, president of Messe Frankfurt USA, said, “We believe this cooperation will serve to create a truly international and cost-effective showcase in New York, while consolidating the number of industry events at the same time.”

Bleinroth acknowledged that Messe Frankfurt plans to compete directly with Lingerie Americas, but added: “At some point in time, we expect to accomplish our original plans and work with the French. The format needs to be discussed.”

Regarding competition from the Messe Frankfurt/Intimate Apparel Salon merger, Laurence Teinturier, manager of the Lingerie Americas show, said: “Of course, they are competition. But it’s very healthy to have competition and it helps you to be a better partner with your vendors.”

As for an alliance between the two, Teinturier said: “The idea of a partnership is so broad. I have no idea what they are talking about.”